Fed cattle prices have declined sharply since early September. This article discusses trends in feeding cost of gain and net returns for cattle finished in Kansas, with emphasis on the extremely large losses currently facing the industry. 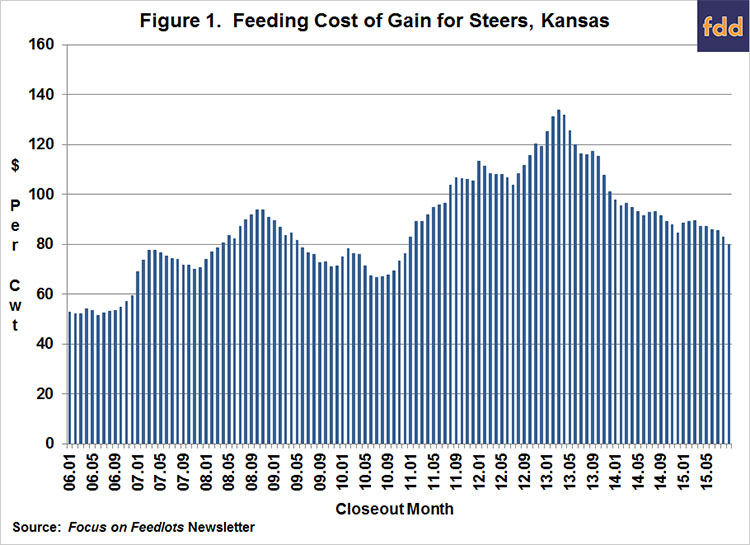 Monthly steer finishing net returns from January 2006 to September 2015 are presented in Figure 2. It is important to note that net returns were computed using closeout months rather than placement months. Net losses per head for 2012 and 2013 were approximately $135 and $115, respectively. Net returns per head in 2014 averaged $165 and ranged from a loss of $29 per head in December to a profit of $280 per head in July. Losses have been the norm so far in 2015. Average losses in the first and second quarters of 2015 were $160 and $190, respectively. Losses in July and August at $85 and $120 per head, respectively, were somewhat smaller than those experienced earlier in 2015. However, these smaller losses did not persist as we moved into September. Even before the recent drop in fed cattle prices, losses were expected for September and October of this year. The substantial drop in fed cattle prices (a drop of over $20 per cwt from the last week in August to the first week of October) have created extremely large losses per head. The preliminary estimate of loss per head for September is $350 per head. The next largest loss per head during the last decade was $300 in January of 2009. Using the fed cattle price for the first week in October yields an estimated loss of $550 per head. 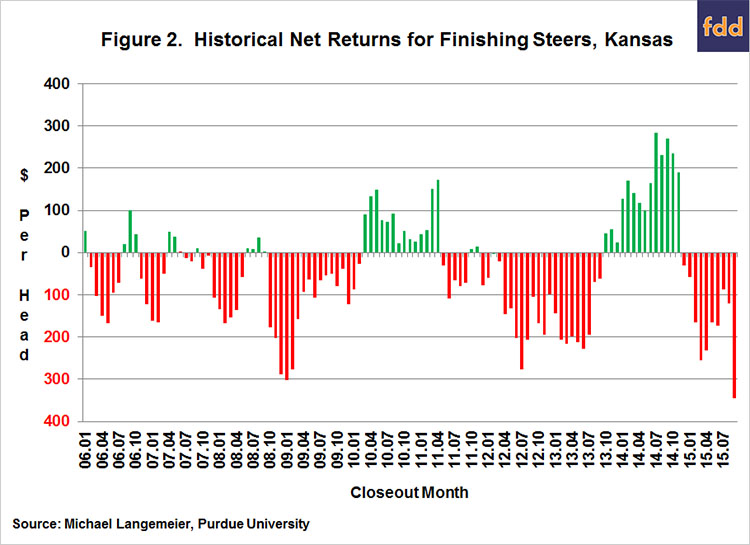 This article discussed recent trends in feeding cost of gain and cattle finishing net returns. Information related to feed costs for other livestock species can be found on the web site for the Center for Commercial Agriculture (here).