Yields become the talk at harvest, but net return determines who farms in 20 years. This article therefore examines the U.S. Department of Agriculture (USDA), Economic Research Service (ERS) data set on cost and return to production of U.S. corn and soybeans. Net cash return per acre is found to have grown on average during each of three different periods: 1975-1995, 1996-2006, and 2007-2014. Annual percent change in net cash return is found to be less variable for soybeans than corn, and during 2007-2014 than earlier periods. Adding soybeans to corn notably reduced annual variation in per acre net cash return.

This study uses the “Commodity Cost and Return” data set compiled by USDA, ERS for selected crops and livestock. The data begin with the 1975 crop year; it is available here. Corn and soybeans are examined in this study. Gross return is calculated using harvest time price and does not include payments by government programs. Costs are measured for variable inputs, overhead expenses, and fixed inputs. A major change in methodology occurred in the late 1990s resulting in comparison issues for various cost measures. Net cash return is examined. Cash costs were calculated and reported prior to the change in methodology. Since the change, which was implemented with the 1996 crop of corn and 1997 crop of soybeans; cash costs are calculated by adding to operating costs, the cost categories of hired labor, taxes and insurance, and general farm overhead. Costs not included in this study are opportunity cost of unpaid labor, opportunity cost of land (rental value), and capital recovery of machinery and equipment.

Average per acre net cash return, excluding government payments, was positive in all three periods for corn and soybeans (see Figure 1). It was higher for soybeans than corn in the first two period and nearly the same during 2007-2014. Standard deviation of per acre net cash return was higher for corn than soybeans in all three period. Per acre net cash return, excluding government payments, grew on average in all three periods (see Figure 2). Unsurprisingly, the strongest growth has been since 2006 when it was double digits for both corn and soybeans. Standard deviation of the annual percent change in per acre net cash return was also smaller in the more recent period, especially relative to 1975-1995 and especially for corn. The high variability for 1975-1995 largely results from the policy decision in the 1985 farm bill to allow prices to become market oriented. Removing 1986 and 1987 from the data set reduces the standard deviation for 1975-1995 to 42% for corn and 32% for soybeans, which are similar to the standard deviations for 1996-2006. Large changes occurred in 1986 and 1987 because farm programs had previously put a floor under price and thus net returns. This situation illustrates that government programs can postpone adjustments to large changes in market situations for only a limited time until public costs become so large that adjustments are made. The result can be even larger variability when policy finally adjusts. 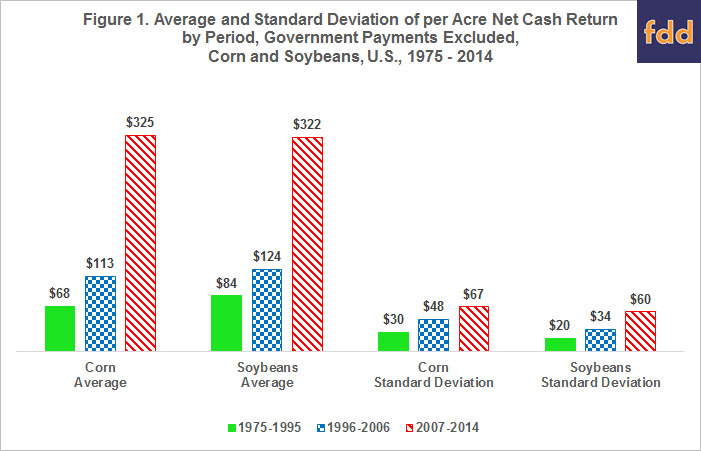 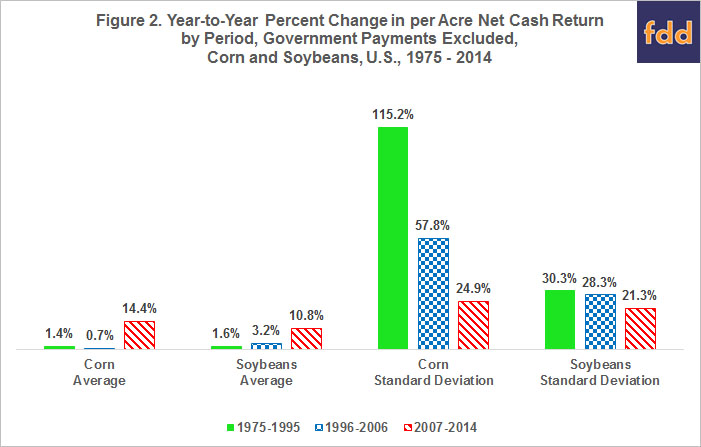 From the perspective of the U.S. as a whole, the last 50 years can be characterized as one in which soybeans have been added to corn in farm rotations. The result has been a sharp drop in the annual variability of net cash return, excluding government payments (see Figure 3). Constraining the analysis to the 1996-2006 period to avoid the high variability of corn net returns around the 1985 farm bill and the period of extended crop prosperity, planting 50% of acres to corn and soybeans, a common rotation, instead of all acres to corn reduced the annual variability in per acre net cash income to 33.4% from 57.8%. Figure 3 also illustrates the higher variability of net cash return than gross revenue, especially for corn. 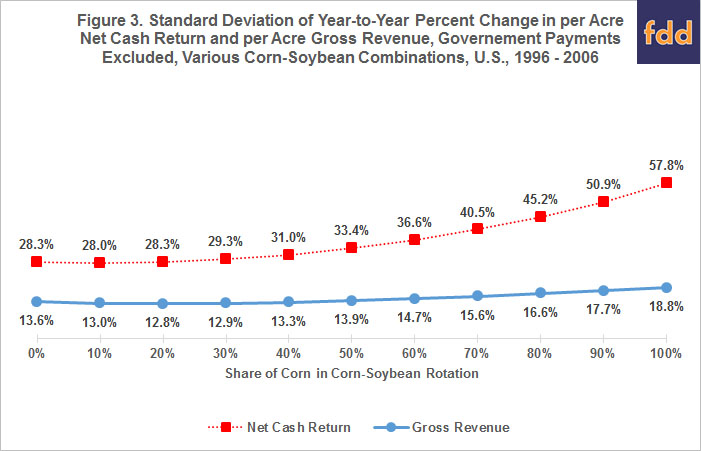 Ratio of Net Cash Return to Gross Revenue by Period

An important financial benchmark is the ratio of net cash return to gross revenue. It tracks how much gross revenue is retained as cash by the enterprise. This metric increased each period (see Figure 4), probably no surprise. But, equally notable is how low the standard deviation of this ratio was in the 2007-2014 period versus the earlier periods, especially for soybeans. 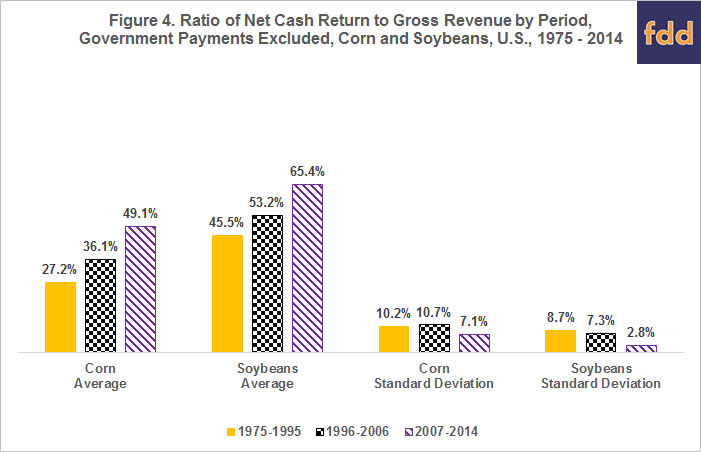 The above analysis and discussion prompts the following observations, suggestions for future studies, and implications.

This publication is also available at http://ohioagmanager.osu.edu