Crop budgets for 2016 have been revised. Primarily because of lower corn and soybean prices, the revised budgets have lower operator and land returns than those released in June 2015 budgets. The complete set includes budgets for corn, soybeans, wheat, and double-crop soybeans grown in northern, central, and southern Illinois. These are available on farmdoc.

Table 1 compares budgets released in June 2015 to those revised in September 2015. These budgets are for high-productivity farmland in central Illinois. Several notes on changes: 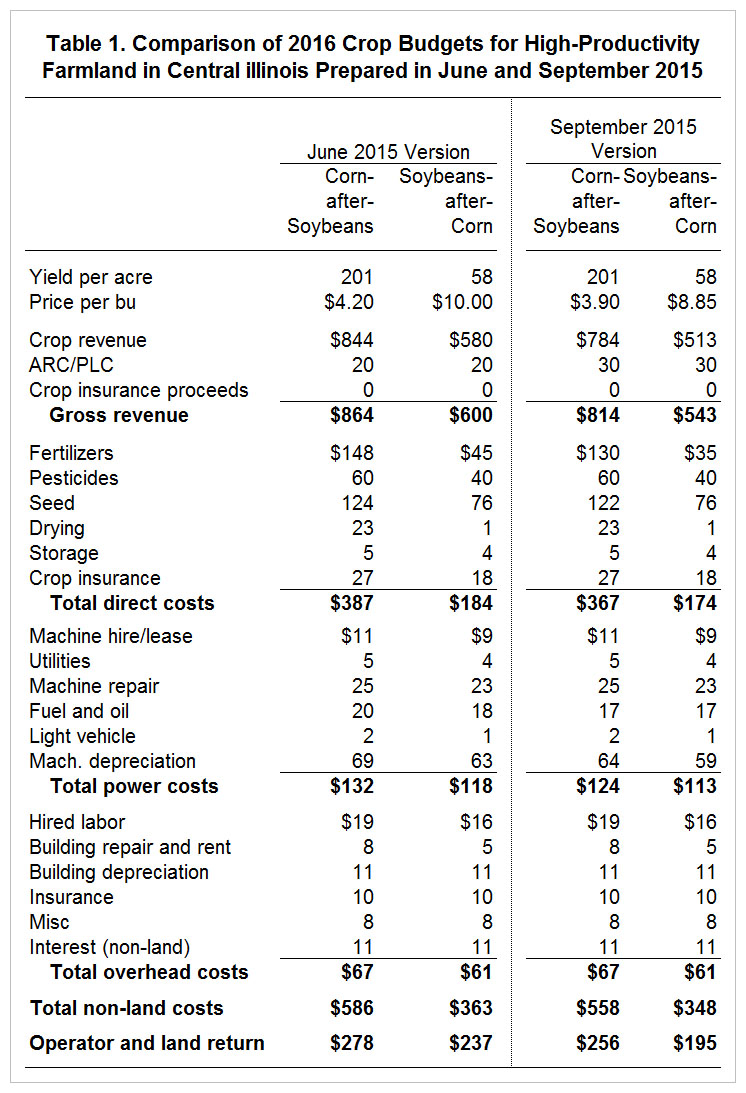 Commodity price outlook for 2016 has turned more pessimistic during the summer. The $3.90 corn price and $8.85 soybean price used in the revised budgets are based on current prices on 2016 futures contract and current forward bids for 2016 grain delivery. Generally, corn prices below $4.00 will cause losses given the current non-land costs and average cash rents. Similarly, soybean prices below $9.00 will lead to losses.

Of course, prices can change dramatically. Perhaps commodity price outlook will brighten. Waiting till early 2016 to set cash rent may provide more certainty on prices, and perhaps prices could be higher. At the end of February, moreover, farmers will be able to set minimum guarantees using crop insurance. Of course, waiting to set 2016 cash rents until 2015 implicitly implies the farmer will continue to farm the land so that fall fieldwork and 2016 input purchases can occur. If the decision is to wait, reaching an understanding of cash rent given different $3.90 corn price and $8.85 soybean price would be useful. Another alternative relative to waiting to set cash rent is to use a variable cash lease (farmdoc daily September 9, 2015).

Schnitkey, G. "Parameters for a 2016 Cash Rent with Bonus." farmdoc daily (5):165, Department of Agricultural and Consumer Economics, University of Illinois at Urbana-Champaign, September 9, 2015.