Financial risk is incurred when a farm borrows money to purchase assets or operate the farm. Financial risk is caused by uncertainty pertaining to interest rates, lending relationships, changes in market value of assets used as collateral, and cash flow used to repay debt. Financial risk is often inter-related with other sources of risk, particularly production and technical, and price and market risk. For instance, when production and/or prices are relatively low, a farm is going to have more difficulty repaying loans and the market value of assets is likely going to soften and perhaps even decline in value.

Changes in interest rates impact the expected rate of growth of equity. Two case farms (Farmer A and Farmer B) are used to illustrate the sensitivity of the growth rate of equity to changes in net returns and interest rates. Both farms have total assets of $2,000,000; family living expenses of $75,000; and face a 25 percent tax rate on farm income (income tax and social security tax). The farms differ by their debt structure. Farmer A has a debt to asset ratio of 25 percent while Farmer B has a debt to asset ratio of 50 percent. 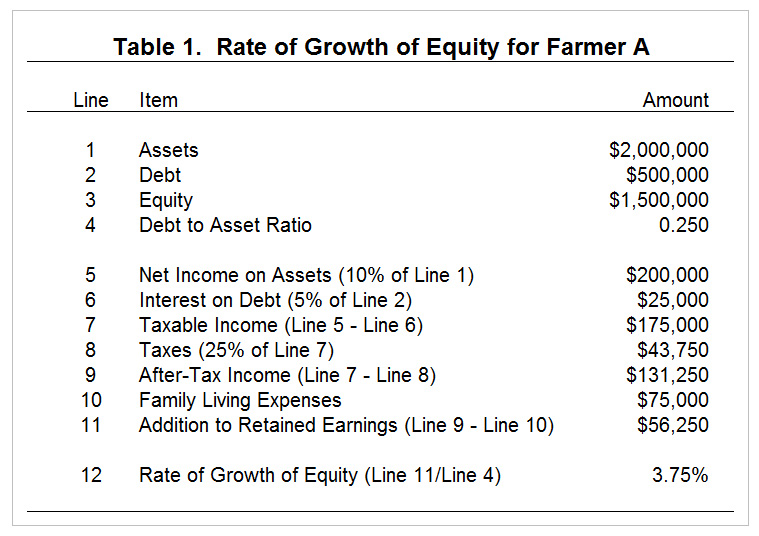 Table 2 illustrates the sensitivity of the growth rate of equity to changes in net income on assets and interest rates. In this table, r is net income divided by total assets and i is the interest rate. A relatively large increase in interest rates is used for illustrative purposes. Three levels of net income on assets are presented. The highest rate (r = 0.15) represents rates earned by farms in the top quartile in terms of financial performance. The median rate (r = 0.10) represents an average long-term rate of return. The lowest rate (r = 0.05) represents a below average long-term rate of return. The lowest rate was typical of rates of return from 2000 to 2006, while the median rate is typical of the period from 2007 to 2013. The lowest rate also conveys typical rates of return from 2014 on. The conceptual framework in table 1 was used to compute the growth rate of equity. It is important to note that the debt to asset ratio varied between the two farms. Asset levels, tax rates, and family living expenses were assumed to be the same for each farm. 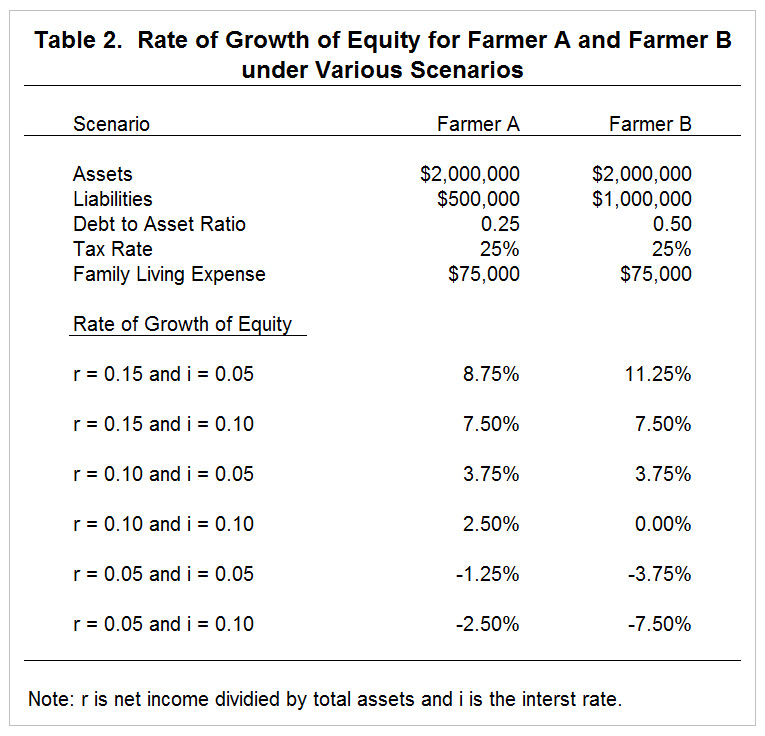 This article described financial risk and illustrated the impact of a change in interest rates on the growth rate of equity. An increase in the interest rate has a large adverse impact on the growth rate of equity. The impact is particularly harmful for farms with more leverage and under a scenario where rates of return are relatively low, which has been the case in the last couple of years. Obviously, it is very important to carefully monitor capital structure (i.e., solvency), particularly in the current economic environment.