On July 21, 2015, Illinois officially released its Nutrient Loss Reduction Strategy designed to improve water quality in Illinois and the Gulf of Mexico by reducing phosphorus and nitrogen losses from both point sources and non-point sources, including from farm fields. This article, the third in the series, reviews the Illinois Nutrient Loss Reduction Strategy (INLRS) as it pertains to farming and nitrate-N loss.

The ultimate goal of the INLRS is to reduce nutrient loss by 45 percent as measured against the average annual loading of nitrate-N and total phosphorus as against the baseline loading of 1980 to 1996. The interim goals are 15 percent by 2025 for nitrate-nitrogen and 25 percent by 2025 for total phosphorus. The strategy seeks an equal 45 percent reduction across all eight-digit Hydrologic Unit Code watersheds (figure 3.11 from the INLRS), but given annual variability, it will measure progress towards the goal using five-year running averages. The INLRS is in response to both the Gulf Hypoxia Action Plan 2008 and the U.S. Environmental Protection Agency’s 2011 memorandum regarding a Framework for State Nutrient Reductions. 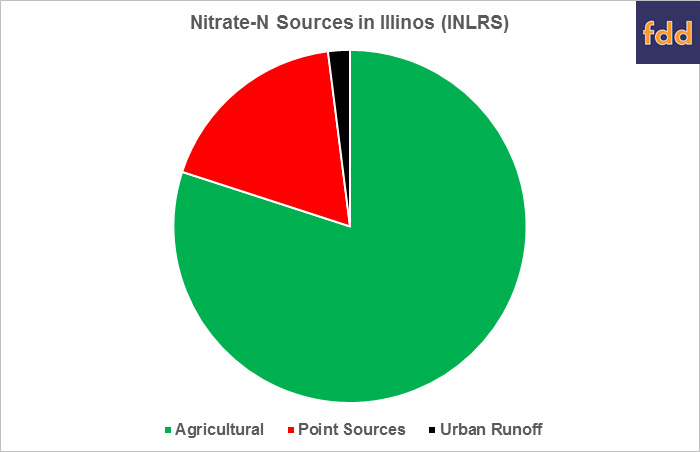 Edge-of-field practices were bioreactors, wetlands and buffers. Bioreactors use wood chips in a trench at the end of the tile to intercept the water and filter out nitrates and the INLRS concluded that a conservative estimate for 25 percent removal if 50 percent of all tile-drained acres used bioreactors would cut losses by 35 million pounds per year. By comparison, constructed wetlands at the end of tile lines on 35 percent of all tile-drained acres would produce a 49 million pound per year reduction, whereas buffers along ditches and streams could reduce losses by 36 million pounds per year.

Finally the INLRS looked at land use changes beginning with the 1.1 million acres of pasture that had been converted to row crops between 1987 and 2007. If those acres were returned to perennial crops, it would reduce losses by an estimated 10 million pounds per year. Converting 1 million acres of tile-drained corn/soybean acres to perennial crops could reduce losses by 25 million pounds per year. 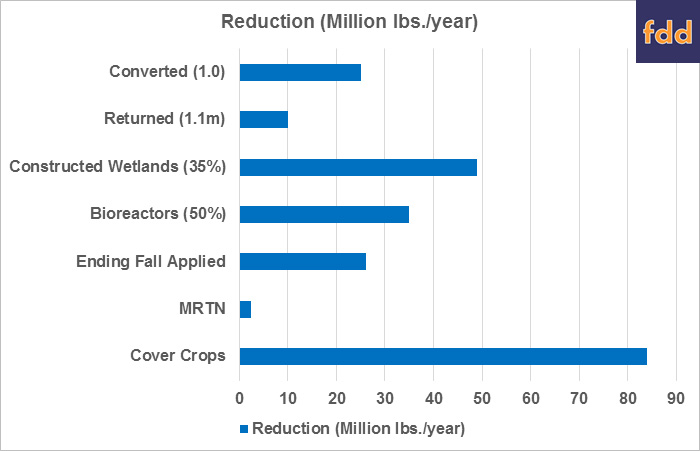 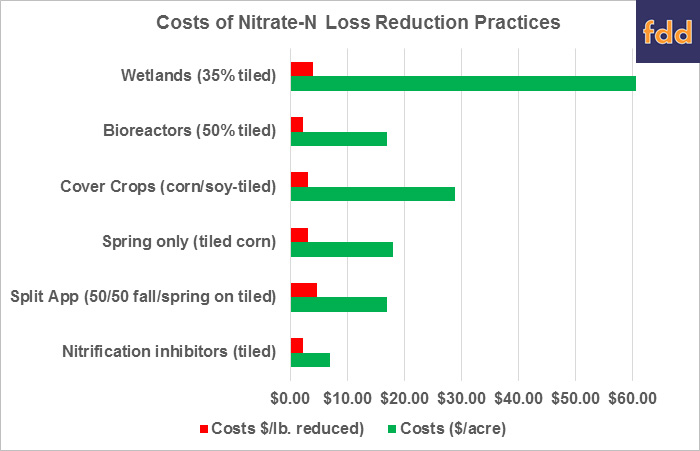 None of these practices alone, even if adopted on the widespread scale envisioned, would reach the 150.61 million pound per year reduction needed to meet the INLRS goals. Cover crops represent the biggest potential for loss reduction, but would be needed across all 9.7 million tile-drained acres; currently Illinois farmers plant only 319,000 acres. The strategy therefore looked at combinations of practices to reach the 45 percent reduction. For example, combining spring-only nitrogen application with cover crops, bioreactors, wetlands and buffers to reduce losses by 45 percent would cost $3.96 per pound removed or $728 million per year for the entire state. This was the lowest cost scenario considered.

How a farmer would implement a nutrient loss reduction strategy for his or her own farm becomes the next step in this process. To do so, farmers would need to consider how to prescribe practices across the farm and, most importantly, budget for them. There are state programs and projects highlighted by the INLRS, as well as Federal conservation programs from the farm bill including the Regional Conservation Partnership Program and the Precision Conservation Management effort discussed previously (farm doc daily February 25, 2016). There is a lot of work and research to be completed and many questions to answer, especially how to prescribe at the field level and better understand the economic and financial aspects.

United States Environmental Protection Agency. "MEMORANDUM: Working in Partnership with States to Address Phosphorus and Nitrogen Pollution through Use of a Framework for State Nutrient Reductions." Released March 16, 2011. https://www.epa.gov/sites/production/files/documents/memo_nitrogen_framework.pdf