Payments by the Agriculture Risk Coverage (ARC) and Price Loss Coverage (PLC) programs for the 2014 crop year have totaled $5.2 billion so far. Intense criticism has accompanied them, in part because the Congressional Budget Office projected payments of $3.8 billion for the first year of ARC ($2.1 billion) and PLC ($1.7 billion). However, the criticism has not considered potential payments that the 2008 farm bill revenue program would have made for the 2014 crop year. In particular, the Average Crop Revenue Election (ACRE) program would have made larger per acre payments than ARC for the 2014 crops of corn, soybeans, and wheat. For 2015, per acre payments are essentially the same for soybeans and wheat while ARC payments are somewhat larger for corn. 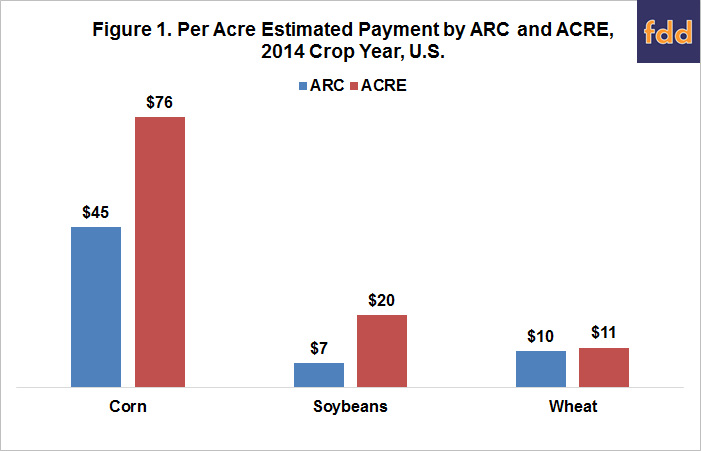 Using the ARC-CO PLC Payment Estimator at farmdoc (see March 8, 2016 farmdoc daily article by Schnitkey, Paulson, Coppess, and Zulauf), per acre payments by ARC are estimated to be higher for the 2015 crops, especially for soybeans (see Figure 2). Per acre payments for 2015 are less for ACRE than ARC for corn and approximately the same for soybeans and wheat. Weighting payments across crops suggest that total ARC payments is likely to exceed total ACRE payments to these 3 crops for the 2015 crop year, but the difference is likely not large. 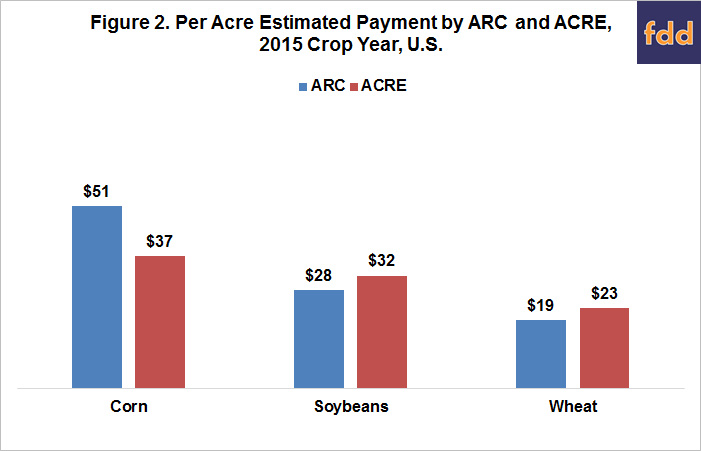 Estimation Notes: Per acre payment estimates for ARC are based on reported FSA payments for the 2014 crop and estimates for 2015 obtained from the ARC-CO PLC Payment Estimator available at farmdoc. The U.S. estimate is obtained by weighting the payments estimated at the state level by the share of base acres in the state. For an extended discussion of the estimation methodology for the 2015 crop year, see the March 8, 2016 farmdoc daily article by Schnitkey, Paulson, Coppess, and Zulauf.

Payments by ACRE for crop/state/year combination are estimated on a planted acre basis using 2014 and 2015 crop year price estimates in the March 9, 2016 World Agricultural Supply and Demand Estimates, state yields from USDA, NASS as reported in its QuickStats data base, and ACRE's payment formula, which includes the acre payment factor of 85%. The ACRE analysis includes only states for which NASS reports yields. Total yields for the state are used, not yields by irrigated and non-irrigated acres. Lack of farm level data precludes including the base acre cap on a FSA farm's ACRE payment acres as well as adjusting for the difference between farm level yields and county level yields when ACRE payments are made. Net impact of these estimation issues on estimated ACRE payments is not clear, but should be kept in mind when assessing the results.

An important feature of ACRE was its requirement that an individual farm must also have a loss to receive a payment. This eligibility requirement was incorporated using the analysis of Zulauf, Schnitkey and Langemeier, specifically their graph as presented in Figure 3. The U.S. average revenue shortfall relative to the ACRE benchmark revenue was used to facilitate the calculation. It ranged from nearly 0% to as high as 18%. The farm loss eligibility requirement reduced the estimated payment by ACRE by as much as 44% for some crop-year combinations and by at least 19% in all years. As a sensitivity check on using the U.S. aggregate shortfall, the revenue shortfall was calculated for the 5 largest producing states for each crop. Their average shortfall was larger in all but one situation, soybeans in 2015. Thus, using a national average shortfall likely led to a conservative estimate of payments.