Cash rents on professionally-managed farmland decreased in 2016. In 2017, pressures to lower cash rents will intensify if commodity prices do not increase. In this article, a table is presented that summarizes cash rents for professionally managed and “average” farmland in Illinois for 2014 through 2016. The 2016 cash rents for “average” farmland is a projection. Data from the Illinois Society of Professional Farm Mangers and Rural Appraisers (Illinois Society) and the U.S. Department of Agricultural are used in preparing this table. Then, pressures on 2017 cash rents are described. Also presented in the appendix are additional tables useful in judging cash rents.

The Illinois Society released results of their its annual land value effort in which land prices and cash rents are compiled for nine regions of Illinois (booklets can be ordered here and a summary is available here. As part of this effort, cash rents for four different land productivity classes are collected: 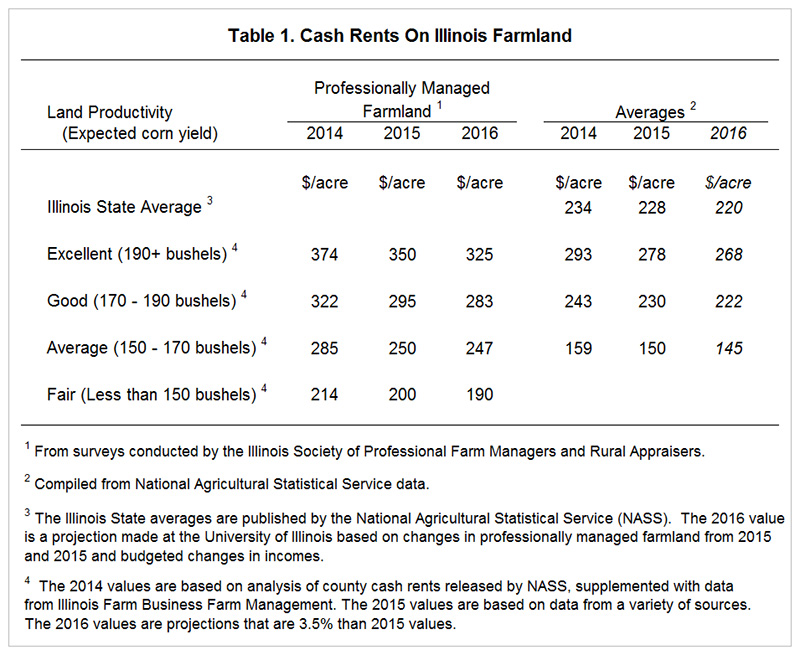 National Agricultural Statistical Service (NASS), an agency of the U.S. Department of Agriculture, calculates average cash rents for Illinois. In 2014, cash rent across Illinois averaged $234 per acre. Average cash rents in 2015 were down 2.6% from 2014 levels to $228 per acre.

Downward pressures will be placed on 2017 cash rents, particularly if commodity prices remain low. Professional farm managers were asked how much they anticipated cash rents to change in 2017 if conditions remain the same as they are currently. When asked, corn prices were near $3.60 per bushel and soybean prices were near $8.70 per bushel. Of the farm managers responding to the survey, 41% expected cash rents to decrease between $25 and $50 per acre while 50% expected decreases in the $5 to $25 per acre range. Only 9% expected cash rents to remain the same, and none expected rents to increase. These expectations point to larger decreases in 2017 than in 2016. 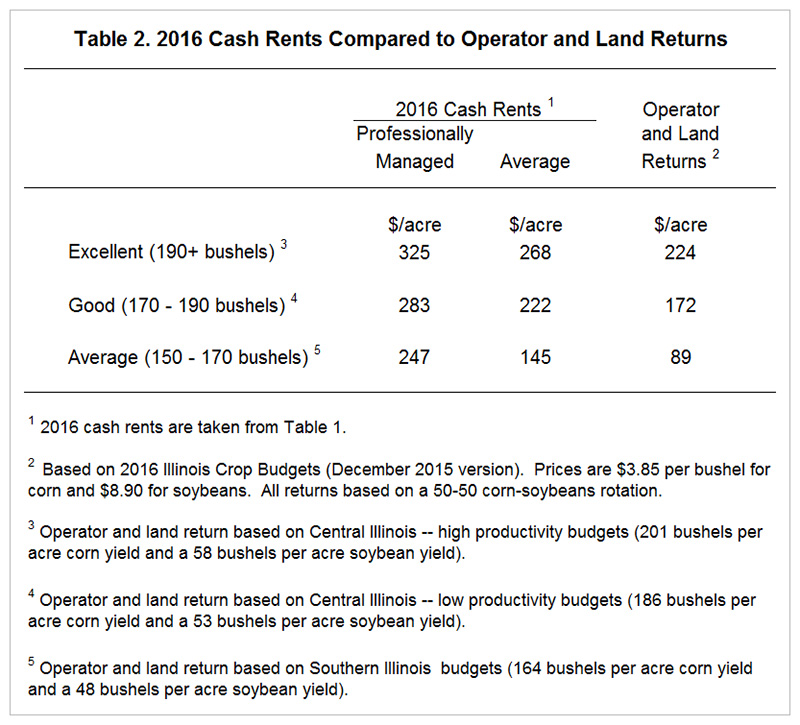 If prices or yield are not above expectations, 2017 will be the third year in a row of losses on cash rent farmland. Rents will likely face greater downward pressure in 2017 as compared to earlier years because the financial positions of farmers have eroded over time. In particular, working capital at the end of 2017 will be at levels requiring many farmers to cut costs.

Cash rent averages presented in this article will be updated as more information becomes available. In particular, estimates of 2016 cash rents will be updated when NASS releases its rent estimates in August 2016.

Appendix Figure 1 shows estimates of average cash rents by county. Values in this figure are based on 2015 NASS county yields. NASS did not release county yields in 2015. Updates were based on changes in state rents and professionally managed rents.

Appendix Figure 2 shows average cash rents in Illinois from 1970 to 2015. This data comes from the National Agricultural Statistical Service.