The recent decline in farm prices have underscored a question that has existed throughout the recent period of higher prices, has a new era of farm prices emerged? An excellent argument for a new higher price era was laid out by Scott Irwin and Darrel Good in their March 29, 2011 farmdoc daily article. As is usual among economists, disagreement exists concerning a new era. This article joins the discussion by using market history to identify key factors that have helped shape current corn and soybean prices. Supply and demand features of world grain and oilseed markets since the early 1970s are reviewed. The role of input productivity, input prices, and inflation are examined. The article concludes with a discussion of what this review of history suggests are key indicators and questions as markets seek to resolve the questions of long term corn and soybean prices and thus whether a new era has emerged.

Review of Corn and Soybean Prices 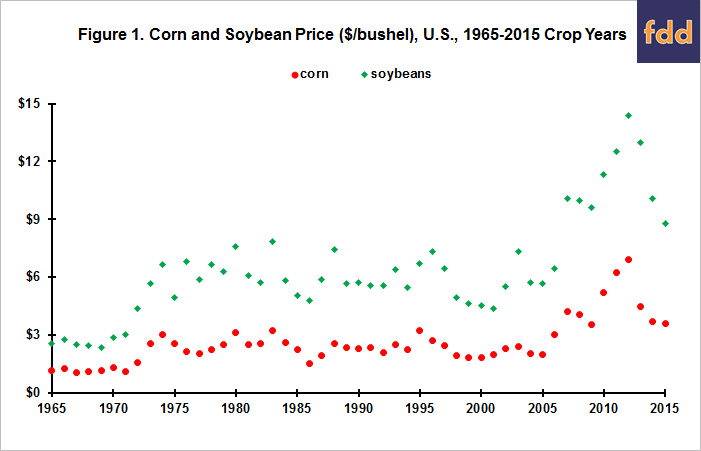 The study starts with 1973, the year after the 1972 price jump. FAS data begins with 1960. Its coverage has expanded over time but particularly in 1972 for oilseeds when peanuts were added and countries with data for sunflowerseeds expanded from 4 to 33. Supply and demand variables examined are consumption, which FAS reports as domestic consumption, yield, and acres harvested, as well as ending stock-consumption ratio. The grains data set used in this study is composed of barley, corn, millet, mixed grains, oats, rice (milled), rye, sorghum, and wheat.

A key contributor to the 2006 price jump was increased consumption of grain for industrial uses, in particular corn for ethanol. However, FAS does not report consumption of grains for industrial use separately, but includes it in a category titled food, seed, and industrial use (FSI). The other category of grain consumption is feed and residual use (subsequently referred to as feed use). Growth in world grain consumption is calculated in total and for these 2 categories over 4 periods. One is 2002-2010. Crop year 2002 was the first in which U.S. consumption of corn for ethanol increased by more than 100 million bushels after removing DDG production. U.S. corn used for ethanol after removing DDGs continued to increase at or above this threshold through the 2010 crop year. Since 2010, the increase has slowed to only 146 million bushels in total through 2015. The other periods are the 1973-1980 period of farm prosperity and the remaining periods of 1981-2001 and 2011-2015. 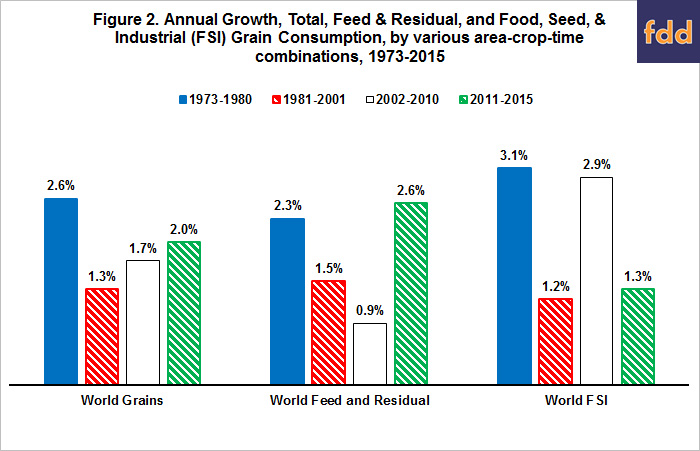 In contrast to the varying growth rates of world grain consumption, world grain yield grew at a relatively constant rate of around 1.7% per year (Figure 3). Moreover, annual variability declined. Using 2 equal length sub-periods, standard deviation of yield was 4.6% vs. 3.0% over 1973-1993 vs. 1994-2015. 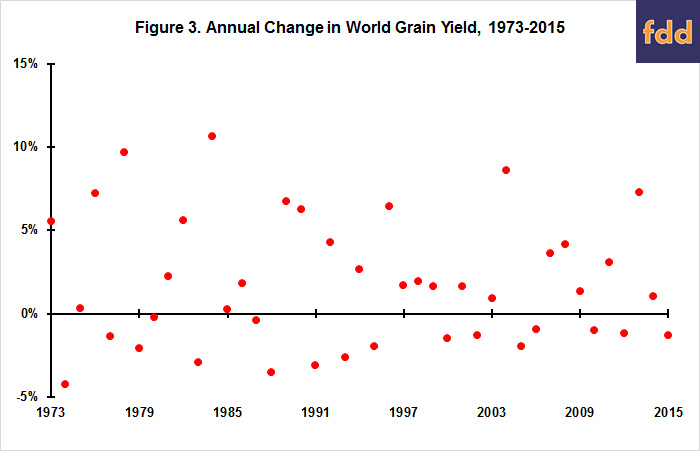 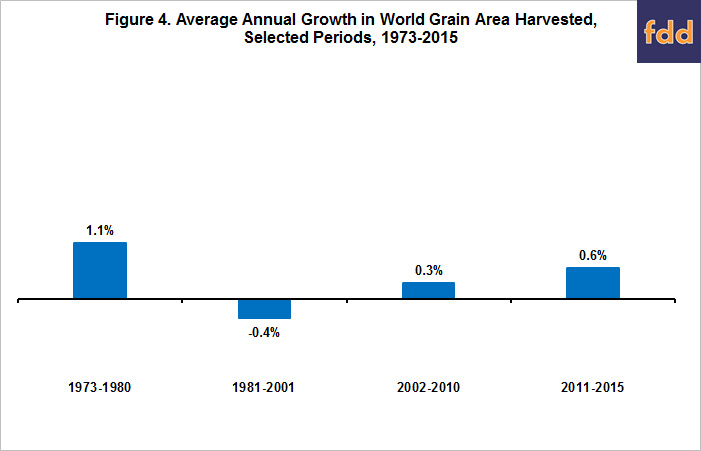 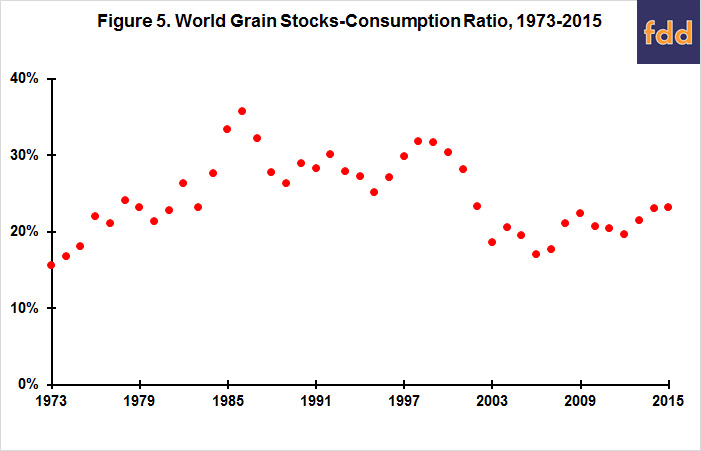 Since yield is a variable of interest and since copra and palm kernel are from trees, not field crops; they are not included in the oilseed data set used in this study. The data set is composed of cottonseed, peanuts, rapeseed, soybeans, and sunflowerseed. 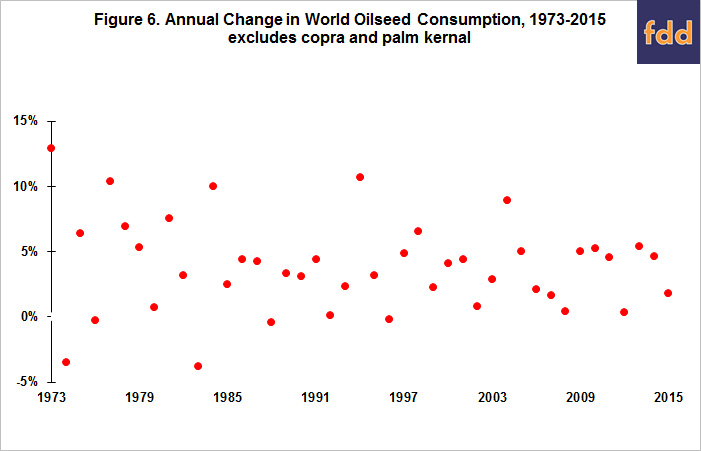 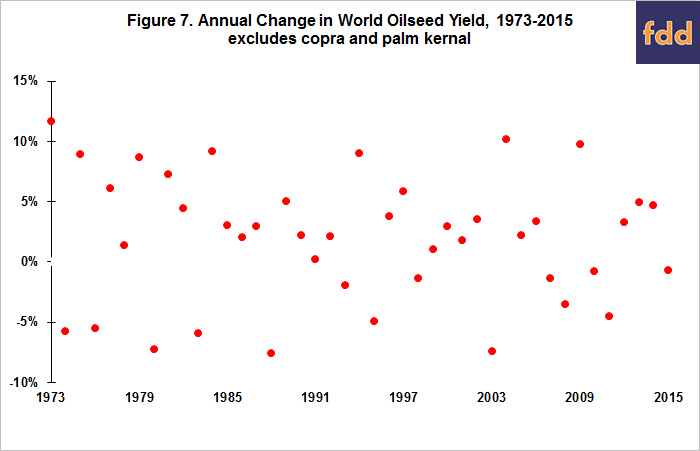 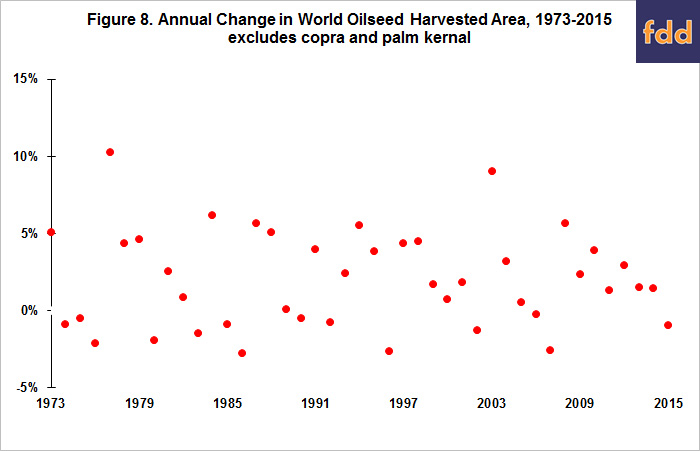 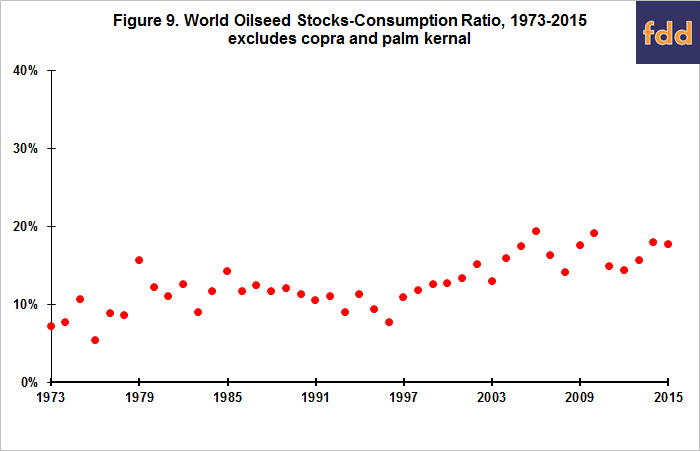 Figure 10 presents one of the strongest empirical relationships for the U.S. farm sector – the ratio of prices farmers pay for agricultural production inputs to the prices they receive for all crops compared against total input productivity of the farm sector. The figure begins with 1960, the first year of the productivity data. The close relationship reflects that, as input productivity increases, farmers can afford to pay higher prices for inputs for a given level of output prices. Because input productivity has increased over time, the gap between input and output prices has also widened. This increasing gap is represented by the upward trend in Figure 10. 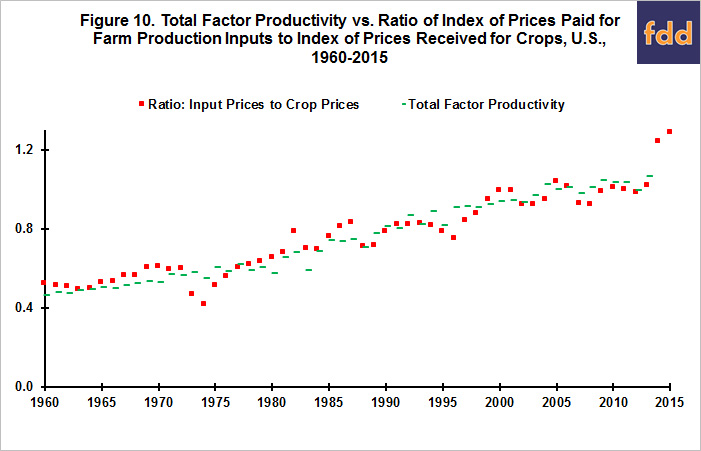 Figure 10 also implies that, for a given level of input productivity, input and output prices will follow each other. If productivity does not change by much and crop prices decline, input prices will decline, and vice versa. Since 1972, the inflation-adjusted, real price index of all U.S. crops declined by more than 20% over 3 multiple year periods – 1980-1987, 1996-2000, and 2012-2015 (Figure 11). The decline is calculated from the first to last year, with the first year in each period having the highest real price and the last year having the lowest real price. Because general price inflation can affect farm input and output prices and because general price inflation varied across these periods; all price series are deflated using the GDP deflator. The GDP deflator is usually considered the most accurate measure of economy wide inflation. 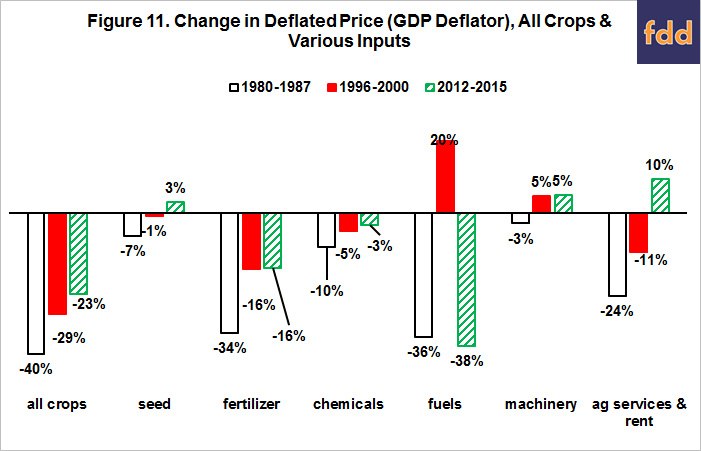 Unsurprisingly, a general pattern of real input price decline emerges in each period of large declines in real crop prices. Real prices for chemicals and, especially, fertilizer declined in all 3 periods. The real price of fuels declined the most of any input in the earliest and latest periods, but increased in the second period. Inflation-adjusted agricultural services and rents declined in the first two periods but has continued to increase during the current period. Rent is available as a separate input category since 1990. Real rent decreased by 18% in 1996-2001, but has increased by 14% in 2012-2015.

A feature of prices received by U.S. farmers since the early 20th Century has been a declining inflation-adjusted, real value. This decline allowed U.S. consumers to reallocate spending from food to other areas of consumption, thus improving their economic quality of life. Figure 12 presents a snapshot of this trend for corn and soybeans since 1965, using the GDP deflator to calculate real prices. To facilitate discussion, real prices are expressed as a percent of their average for 2001-2005, the period of lowest real corn and soybeans prices since 1965. Real corn and soybeans prices increased in the mid-1970s, but resumed their long term decline by the early 1980s. Real corn and soybean prices again moved higher after 2005, peaking in 2012. Since 2012 real corn and soybean prices have declined notably towards their 2001-2005 real values; however, they remain 33% and 22%, respectively, above the 2001-2005 averages. The decline mostly reflects lower current dollar prices of corn and soybeans since U.S. inflation has been so low recently. 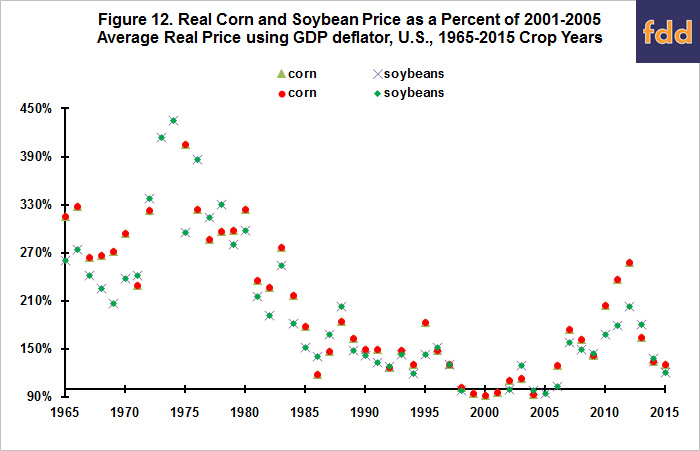