Prospective Plantings reports are survey-based estimates of producer planting intentions that are typically released at the end of March and reflect producer responses to the March Agricultural Survey. Good and Irwin (2011) provide a thorough review of the survey procedures used by the USDA. As one of the first indications of the upcoming supply for the new crop year, these reports have been shown to have significant impacts on commodity markets (e.g. Dorfman and Karali, 2015; Xie et al, 2016). However, like any survey-based estimates, Prospective Plantings are subject to sampling and non-sampling errors. While USDA goes to a great extent to minimize potential errors through their survey design and reported data review procedures, some error is unavoidable. The purpose of this article is to assess reliability of Prospective Plantings estimates based on their track record over the last 20 years. In doing so, we are expanding on brief reliability analyses published at the end of each prospective plantings report and taking a more detailed look at the errors associated with these estimates. Several earlier farmdoc daily articles (e.g., April 4, 2014; October 15, 2015; January 27, 2016) examine additional issues related to USDA acreage reports. 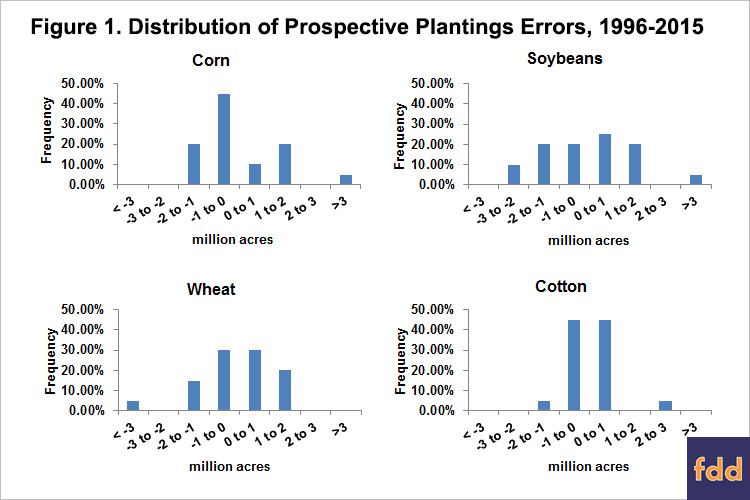 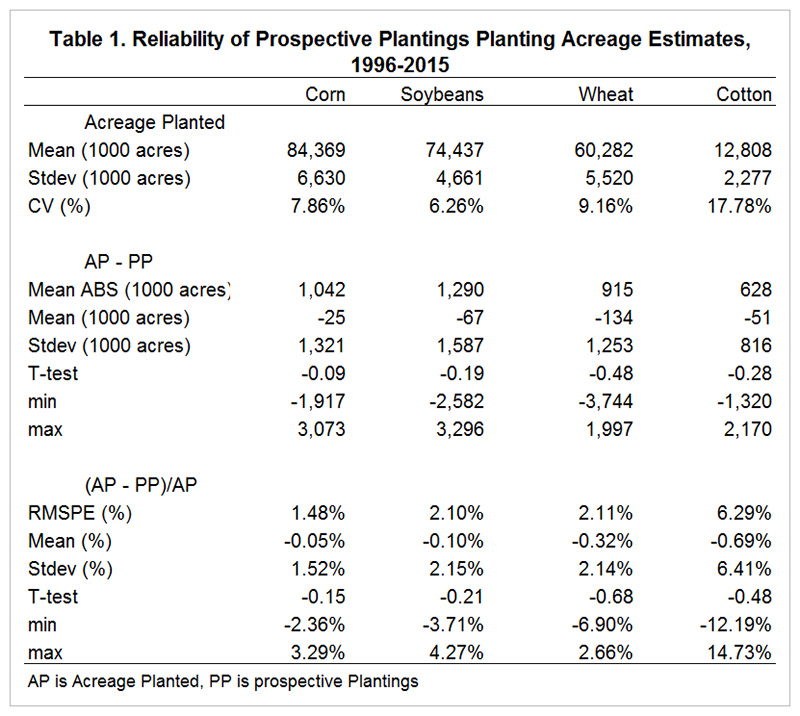 Average (mean) errors are examined to determine whether positive errors are offset by the negative errors to make sure there is no consistent bias in Prospective Plantings estimates. The t-tests in table 1 indicate that the mean errors are not significantly different from zero at the conventional confidence levels, suggesting that Prospective Plantings have been unbiased estimates of planted acreage over the last 20 years. While corn forecast errors were less than 3.5% even in extreme cases (max and min), other crops, particularly cotton, showed much larger errors reaching an overestimation by 12% in 2007 and an underestimation by almost 15% in 2011. In acreage terms, soybeans and wheat have seen some of the largest errors with overestimation by 3,744 thousand acres in wheat in 2011 and underestimation by 3,296 thousand acres in soybeans in 2012. 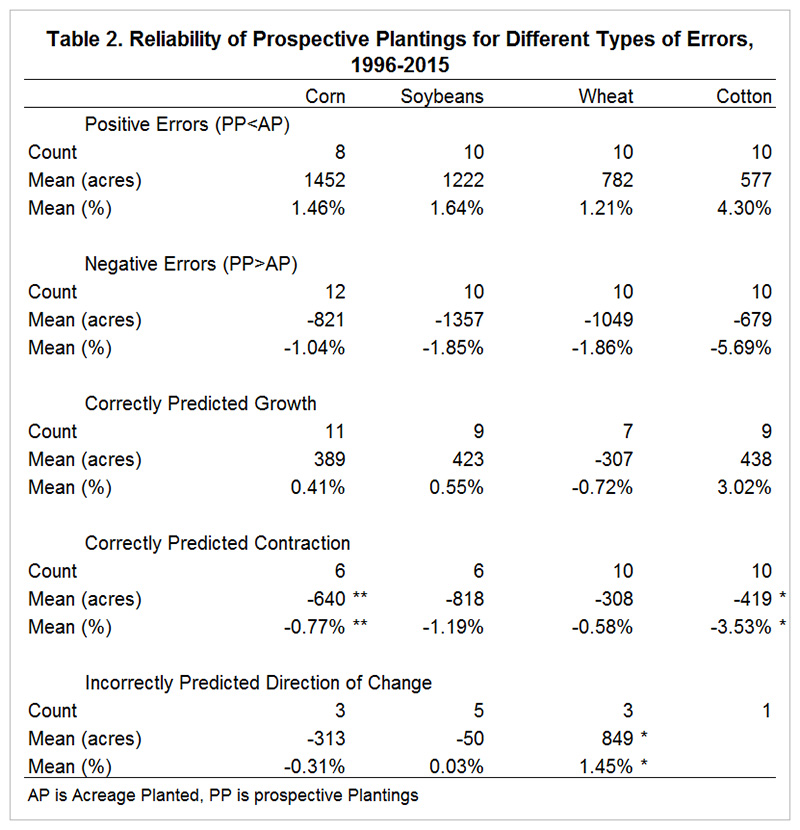 Looking forward to the next Prospective Plantings report that will be released on March 31, 2016, our findings imply that while these estimates will not be equal to the June 2016 planted acreage numbers or the final planted acreage released in January 2017, they will be within a 3% margin of error for corn, soybeans and wheat and within a 1 million acre margin of error for cotton in the vast majority of the time. On average, we can expect corn prospective plantings estimates to be 1.042 million acres or 1.48% different from the final planted acreage numbers. Prospective plantings tend to be “off” from the final planted acreage by 1.290 million acres or 2.10% for soybeans, 0.915 million acres or 2.11% for wheat and 0.628 million acres or 6.29% for cotton. Most of the time, Prospective Plantings are unbiased estimates of final planted acreage, meaning that they neither overestimate or underestimate the final numbers. However, the situations to watch out for are associated with acreage contraction. Thus, if USDA will report that corn acreage will be down from what it was last year, they will likely underestimate this acreage reduction by 0.77% or 640 thousand acres. Similarly, if cotton acreage is down from last year, USDA will likely underestimate this acreage reduction by 3.53% or 419 thousand acres. No bias associated with acreage contraction has been detected in soybeans or wheat.

Good, D., and S. Irwin. "Progression of USDA Corn and Soybean Acreage Estimates and Prospects for Final Estimates for 2015."farmdoc daily (5):191, Department of Agricultural and Consumer Economics, University of Illinois at Urbana-Champaign, October 15, 2015.