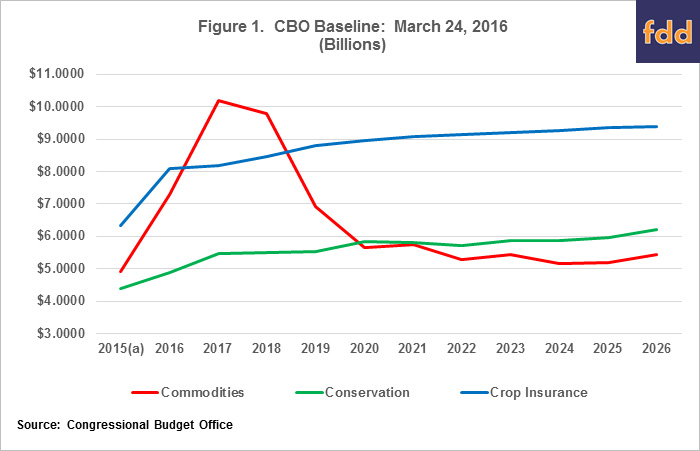 Land retirement policies make payments to landowners and farmers to remove land from agricultural production. These policies have the longest history. They began during the Dust Bowl era of the 1930’s when Great Plains’ soils were blown from drought-damaged fields to as far away as the nation’s capital and other major East Coast cities. In response, Congress created policies to combat soil erosion in 1935. In 1936, Congress enlisted conservation in the effort to reduce planted acres in order to boost crop prices. From 1936 to 1985, conservation policy was arguably little more than a component of the commodity price support system — a mechanism for taking land out farming. For example, as Congress and the Eisenhower Administration wrestled with overwhelming commodity surpluses in the Fifties, they created the Soil Bank in 1956. The Soil Bank included both short term (year-by-year) acreage reduction and longer-term conservation reserve (three year contracts) programs. The Soil Bank was designed to divert acres from crop production by paying farmers to devote some acres to conservation instead of surplus crops. The acreage reserve policy was also known as the Agricultural Conservation Program and the Rural Environmental Assistance Program; conservation was a stated outcome of the policies but the main purpose remained that of controlling commodity production. 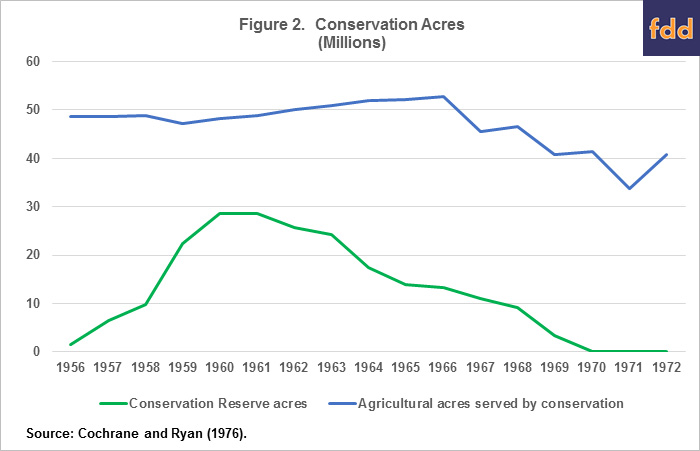 The Food Security Act of 1985 created a specific conservation title and the modern version of the Conservation Reserve Program (CRP). CRP uses long-term (10 to 15 years) contracts to retire highly-erodible and other environmentally-sensitive lands from production in order to “conserve and improve the soil, water, and wildlife resources” (16 U.S.C. §3831). It initially put over 36 million acres into retirement. The 2014 Farm Bill continued the CRP but stepped down the acres that could be enrolled from 27.5 million acres in 2014 to 24 million acres in 2017 and 2018. Other land retirement policies involve easements to protect and restore wetlands and grasslands or to protect farmland under pressure from development and keep it in farming. For wetlands and grasslands, the Agricultural Conservation Easement Program (ACEP) helps purchase permanent (or 30-year) property interests that remove portions of farmland out of production and into conserving uses. The Farm Bill provides for basic program parameters and an annual amount of mandatory funding between $400 and $500 million the first four years and $250 million in 2018. By 2012, Wetlands Reserve Program held 2.5 million acres in easements nationwide (see, Chief David White testimony) and NRCS reported enrolling nearly 144,000 acres in all easements in 2014.

Working lands conservation programs integrate conservation practices with farming instead of removing land from production. The main working lands programs are the Environmental Quality Incentives Program (EQIP), the Conservation Stewardship Program (CSP). As discussed in part 1 of this series, the 2014 Farm Bill also created the Regional Conservation Partnership Program (RCPP) (see, farmdoc daily, February 25, 2016; see also, farmdoc daily, May 29, 2014). RCPP works through partnership agreements between NRCS and private or public partners to implement conservation practices on a regional scale. It makes use of existing program authorities, such as EQIP, CSP and ACEP.

The Federal Agriculture Improvement and Reform Act of 1996 eliminated the traditional acreage control policies that had previously been linked to conservation efforts. Along with that change in commodity policy, Congress created EQIP to provide cost-share assistance to farmers for installing specific conservation practices on their farms. EQIP seeks to help farmers comply with or avoid regulations by “assisting producers in protecting soil, water, air, and related natural resources and meeting environmental quality criteria” (16 U.S.C. §3839aa). The 2014 Farm Bill provided $1.65 billion per fiscal year for this program and 60 percent of the funds are reserved for livestock producers. NRCS provides direct financial assistance to producers to help develop Conservation Activity Plans (CAP) that are designed to address specific land use issues. For the nutrient loss issue, CAPs exist for nutrient management plans for both livestock and plant production, as well as for drainage water management.

Congress created CSP in the Farm Security and Rural Investment Act of 2002 as the Conservation Security Program. It was revised and renamed in the Food, Conservation, and Energy Act of 2008. It was originally designed help improve both farm incomes and on-farm conservation. CSP was revised again by the 2014 Farm Bill to “encourage producers to address priority resource concerns and improve and conserve the quality and condition of natural resources in a comprehensive manner” (16 U.S.C. §3838e). A farmer is eligible to enroll in a five-year contract based on: (1) a demonstration that the farmer meets a threshold for addressing two natural resource concerns; and (2) an agreement to maintain and install or adopt additional conservation practices to address an additional natural resource concern over the five years. The goal is to reward and encourage conservation efforts across an entire farm (i.e., all land under the farmer’s control), and the program is designed to grow by 10 million acres each fiscal year through 2022. Farmers cannot receive more than $200,000 in total during 2014 through 2018. CSP also provides supplemental payments for crop rotations that conserve natural resources. 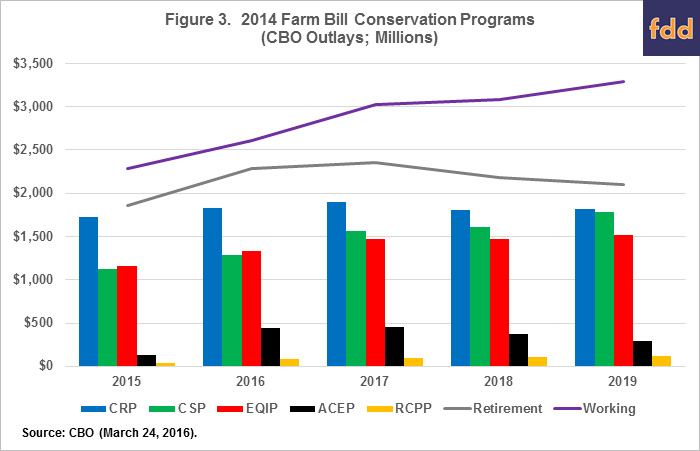 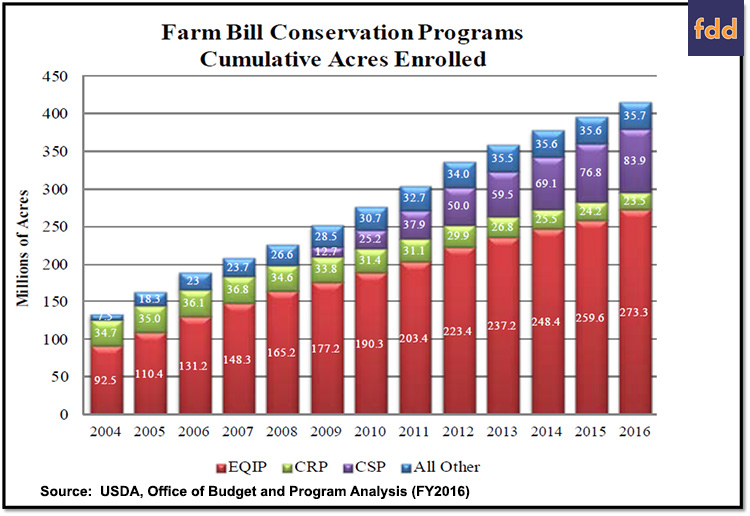 This is not the whole story, however. CRP contracts run 10 to 15 years and are subject to renewal while CSP contracts run for 5 years with the opportunity to renew for an additional five years. These numbers also do not indicate the number of acres that farmers wanted to enroll but were unable to due to backlogs or insufficient funding. It also does not provide an indication as to the scope of the acres necessary to address nutrient loss at the scale of the Mississippi River Basin. More data and analysis is needed to better understand these trends in conservation policy and what they may mean for nutrient loss reduction efforts. Working lands policies would seem to be the more relevant for reducing nutrient losses from productive, tile-drained (and expensive) farmland because little of it can be expected to be retired. As the effort moves forward, there is also a need to evaluate conservation policies in light of what farmers need on their farms.

Coppess, J., and T. Kuethe. "The Regional Conservation Partnership Program in the Farm Bill." farmdoc daily (4):99, Department of Agricultural and Consumer Economics, University of Illinois at Urbana-Champaign, May 29, 2014.