Considerable debate surrounds the U.S. crop insurance program, including its cost, role in farm conservation, and impact on farm management and farmland values. Objective of this article is to examine the broader considerations that underpin these specific debates. Unless these broader considerations are addressed, crop insurance will likely remain a topic of debate well beyond the next farm bill.

Cost to the U.S. government of its crop insurance program has increased from $3.3 billion in 2000-2004 to $8.6 billion in 2010-2014 (see Figure 1 and data note 1). Costs include the subsidy of insurance premiums, reimbursement of Administrative and Operation (A&O) costs incurred by private companies in delivering the insurance program, and government’s share of participating in underwriting gains and losses. Any large expenditure program growing fast will attract attention. Moreover, the growth in crop insurance cost occurred during a period of generally low financial stress among crop farms. This feature runs opposite to the counter-cyclical nature of most farm safety net programs since these programs began during the 1930s. 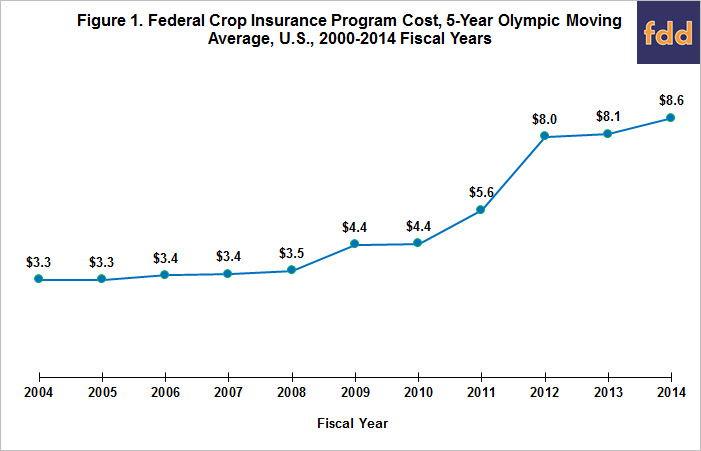 The increase in costs occurred even though the reimbursement rate for A&O was reduced and the reinsurance agreement, which affects the government’s underwriting losses and gains, was renegotiated. Share of total costs accounted for by these two cost components has declined since 2000 (see Figure 2). In contrast, the share of expenditures accounted for by the premium subsidy increased from 56% in 2000-2004 to 87% in 2010-2014. 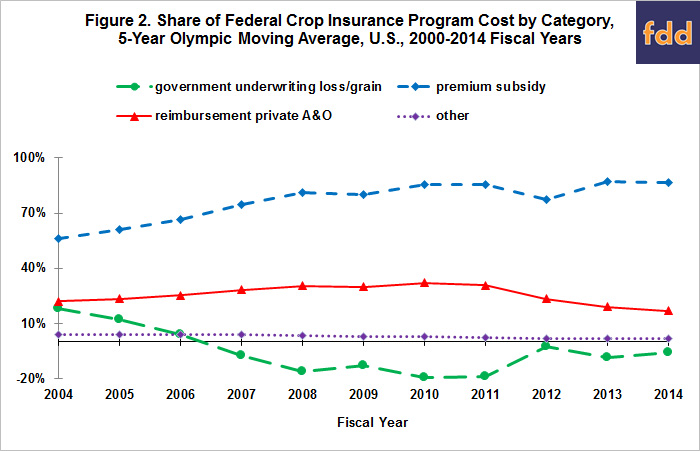 The Federal Crop Insurance Act of 1980 made numerous changes to the crop insurance program, which had existed since the 1930s as an experimental program. A 30% subsidy rate for crop insurance premiums was enacted, but the subsidy was limited to the dollar value when applied to the 65% coverage level. Over time Congress increased the premium subsidy rate at all coverage levels to encourage participation. Major changes in subsidy rates occurred in the Agricultural Risk Protection Act of 2000 and Food, Conservation, and Energy Act of 2008. As an example, the Agricultural Risk Protection Act of 2000 increased the subsidy rate for Crop Revenue Coverage insurance from 18% to 55% at 75% coverage.

Federal subsidies for crop insurance premiums did not consistently exceed $1 billion per year until 2000 (see Figure 3). They then increased by around 150% both before and during the period of farm prosperity. Because the per-acre value of a crop is a key determinant of premium subsidies, premiums subsidies will likely decline if prices continue to stay low. Besides per-acre crop value, other key determinants of premium subsidies are the premium subsidy rate set by Congress, the insurance products bought by farmers since subsidy rates vary by product, and changes in the rating of risk. For example, changes in per-acre crop value likely explain only a small part of the increase in premium subsidies that occurred through the 2006 crop year, or the beginning of farm prosperity. 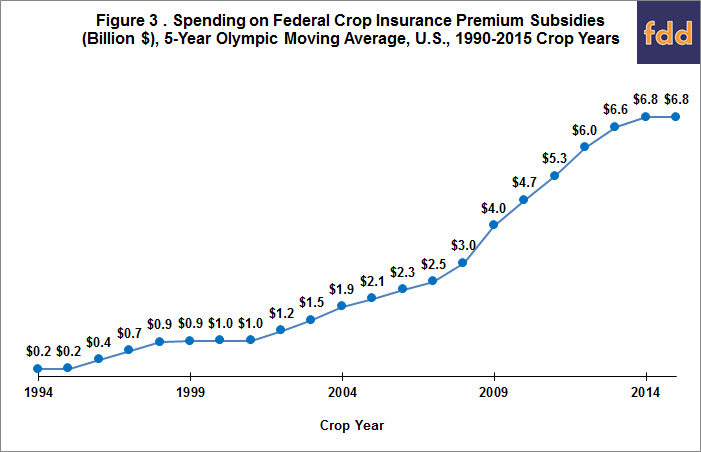 Consistent with Congressional intent to increase participation, insured liabilities as a share of 85% of the value of U.S. crop receipts increased from 16% during the early 1990s to 54% in recent years (see Figure 4). Crop receipts are multiplied by 85% because 85% is the highest coverage level for individual farm insurance, which is by far the most purchased insurance product. Both acres insured and average coverage level increased, the former from 90 million to 299 million and the latter from 66% to 75% between the early 1990s and 2015. 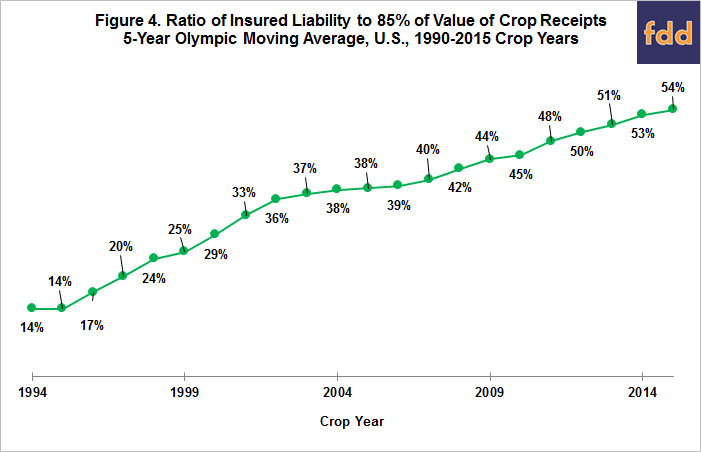 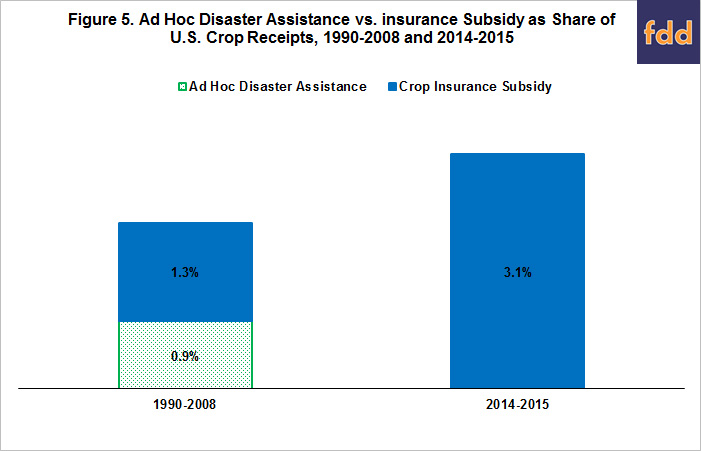 The increase in crop insurance participation was achieved with an increasing premium subsidy cost, even when measured relative to insured liability. Average premium subsidy per dollar of insured liability steadily increased at least through the 2010 crop year (see Figure 6). This finding is not surprising. Low risk farmers are less likely to buy insurance since their risk is low. A higher subsidy rate is thus needed to induce them to buy insurance. However, the higher subsidy rate is made available to all farmers, regardless of their risk. (See data note 4.) 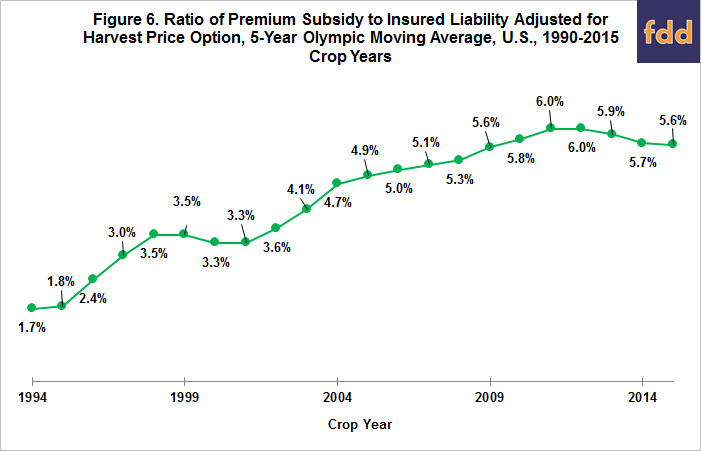 1. A 5-year Olympic average is used throughout this paper to eliminate low and high value years that may skew the data.

3 Ad hoc crop disaster assistance does not include marketing loss assistance and oilseed payments made during fiscal years 1999-2001. Congress authorized these payments in response to low prices, not low yield; with a contributing factor being the elimination of target price programs by the 1996 farm bill. The two programs subsequently became the basis for reinstituting a target price program, specifically the countercyclical price program in the 2002 farm bill. In summary, these two programs are more similar to commodity program payments.

4. Insured liability is adjusted to account for the increasing share of crop insurance contracts that contain the harvest price option (HPO). To account for the HPO feature, the liability for contracts that had HPO was increased by 7.3%. This factor was the average increase from the initial insurance price to the harvest insurance price of corn, sorghum, soybeans, upland cotton and wheat when their price increased over the 1973-2015 crop years. Contracts that had the HPO feature were Crop Revenue Coverage (CRC), Revenue Assurance (RA), Group Risk Income Protection - Harvest Revenue Option (GRIPH), Revenue Protection (RP), and Area Revenue Protection (ARP). All RA contracts are assumed to have the HPO option even though it was an option. Data on RA does not contain a breakout by HPO option. Anecdotal evidence suggests that the HPO option was commonly chosen.