The U.S. Department of Agriculture’s (USDA) Economic Research Service (ERS) is one of the federal statistical agencies and produces detailed financial estimates and forecasts for the farm sector. This information is contained in the Farm Income and Wealth Statistics data product -consisting of over 375,000 data points–which breaks down the farm sector by geography, time period, commodity, and different financial variables. This is a large amount of data to explore and gather meaningful takeaways on farm sector income and finance trends. ERS recently released three new interactive visualizations to make this data more accessible to stakeholders using Tableau business intelligence and analytics software.

The visualizations rely on information that is already contained in spreadsheet form on the ERS Farm Income and Wealth Statistics data product. As of February 9, 2016, the data include historical state and national estimates of commodity revenues, expenses, and net income measures from 1910 to 2014. State and national estimates are also available from 1960 to 2014 for assets, debt, equity (wealth), and a number of financial ratios for the U.S. farm sector. Additionally, the ERS produces national forecasts of the farm sector’s income statement and balance sheet. The current release includes both 2015 and 2016 calendar year forecasts.

The forecast and estimate data rely on a variety of survey and administrative data. The primary surveys are the Agricultural Resource Management Survey (ARMS) produced by ERS and the National Agricultural Statistics Service (NASS) and various commodity surveys conducted by NASS that contribute financial data for over 200 crop and animals and products commodities. The data also summarize administrative data on Federal Government payments from USDA agencies including the Farm Service Agency (FSA), the Natural Resources Conservation Service (NRCS), and the Commodity Credit Corporation (CCC). The data also incorporate information from lender reports produced by the Federal Reserve, which are used to create the farm sector balance sheet. The data are used by the USDA and other industry leaders to inform their perspective on of the financial health and well-being of the agricultural sector of the U.S. economy. 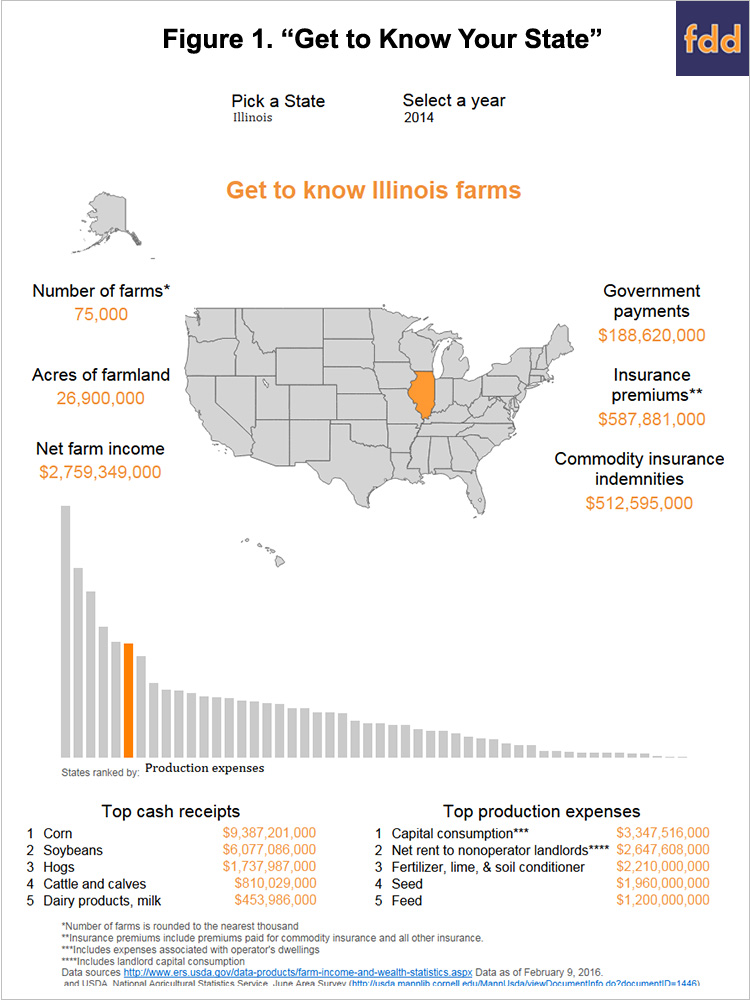 The first data visualization, “Get to Know Your State”, uses the example of Illinois and is presented in Figure 1. As the name suggests, this visualization enables the user to pick their state and see a collection of state level agricultural variables. The data include general information on the number of farms and the acres of farmland in the state, as well as the top five commodities by cash receipts and the top 5 expenses from 2008-2014. Users can quickly see where a particular state ranks compared to other states in terms of net farm income, cash receipts, expenses, commodity insurance indemnities, and acreage. 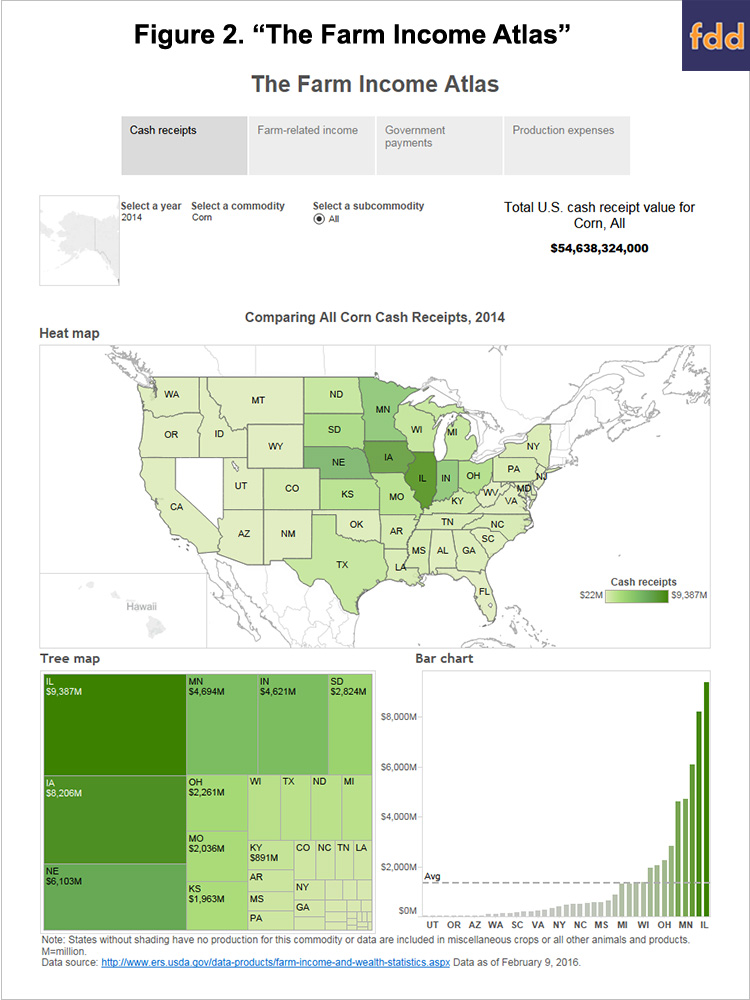 The Farm Income Atlas presents a comprehensive picture of the farm sector income statement. Users can choose to display data on sector cash receipts, expenses, federal government farm payments, and other farm-related income from 2008 through 2014. Figure 2 provides an example of cash receipts for corn in 2014. The atlas visualizes the same set of data three different ways. Front and center is a heat map to enable users to quickly see where corn cash receipts are concentrated across the U.S. While the farm income heat map visualizes geographic concentrations, it is not designed to show scale differences between states. For example, it is clear that corn cash receipts are concentrated in the Midwest, but it is difficult to tell what specific portion of U.S. corn cash receipts are from the Midwest. The treemap in the bottom left of the visualization sizes the state cash receipts based on the selected variable. Now the user can see from the treemap that Illinois, Iowa, and Nebraska together represent approximately one-third of all corn cash receipts in 2014. The chart in the bottom right is a more traditional bar chart that shows the state ranking as well as a comparison to the average of the states’ values. The user can obtain information on cash receipts estimates for over 200 commodities, farm-related income, which includes rental income, machine hire and custom work income, and commodity insurance income. The user can also look into details on federal government payments by program, as well as detailed views of how 44 separate production expenses ranging from seed and feed to irrigation expenses are distributed nationally. 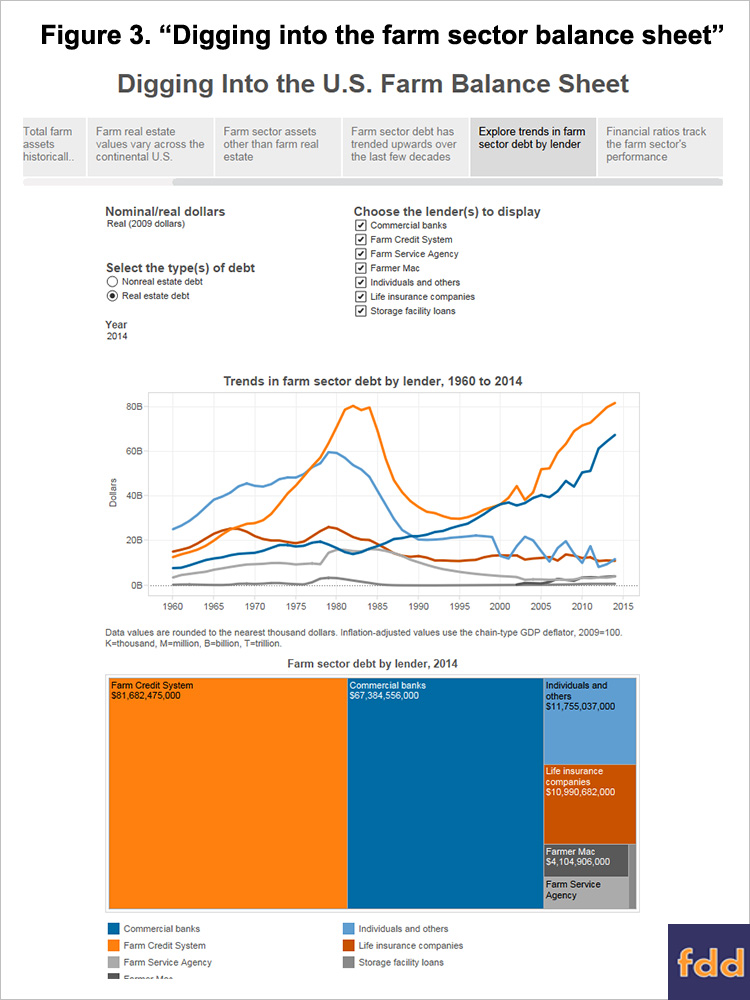 The “Digging into the U.S. Farm Balance Sheet” visualization presents a comprehensive picture of the balance sheet. Figure 3 provides an example of real estate debt by lender. The visualization depicts the composition of debt by lender for the farm sector. For instance, figure 3 shows that the Farm Credit System is the largest lender for loans secured by real estate followed by commercial banks. That order reverses for debt not secured by real estate. The overall focus of this visualization is the farm sector balance sheet and important financial ratios from 1960 to present. Unlike the other two visualizations, this also includes the Farm Income and Wealth Statistics forecasts for 2015 and 2016, where applicable. The visualization reveals the extent of the contribution of real estate values to the overall balance sheet, accounting for roughly 70-80% of total asset values. Additionally, users can look at the farm sector’s performance using financial ratios. The ratios measure the farm sector’s efficiency, liquidity, profitability, and solvency. As an example, the sector’s solvency as defined by the debt-to-asset ratio has been historically low (lower debt-to- asset ratios mean the sector is less leveraged) in recent years, but is forecast to increase in 2015 and 2016.

Data on the farm sector’s performance can help farm sector stakeholders stay informed. ERS’ Farm Income and Wealth Statistics data product contains a large amount of detailed state and U.S. farm sector financial data. The three visualizations together provide a quick, comprehensive overview of the farm sector by breaking down the farm sector income statement and balance sheet, as well as give users the opportunity to get to know how their state compares to other states and the rest of the US.