From 2009 through 2015, anhydrous ammonia had an average price equal to $.45 per pound of actual nitrogen (N). This $.45 price was lower than the prices for urea ($.54 per pound) and liquid N ($.61 per pound). From 2009 through 2015, nitrogen prices averaged less in the fall than in the spring. Often, applying anhydrous ammonia in the fall is one of the lowest cost methods of placing nitrogen on fields. Benefits from a combination of higher yields or lower application rates need to be obtained to cause spring and early summer applications to be competitive with fall applications.

Prices used in this article are from the bi-weekly Illinois Production Cost Report, a publication of the Agricultural Marketing Service (AMS), an agency of the U.S. Department of Agriculture. AMS began reporting prices in September 2008. Since that starting point, anhydrous ammonia prices varied. The highest reported price of $1,161 per ton occurred on October 15, 2008. The lowest price of $431 per ton occurred during the fall of 2009. Over the entire period, prices averaged $733 per ton. 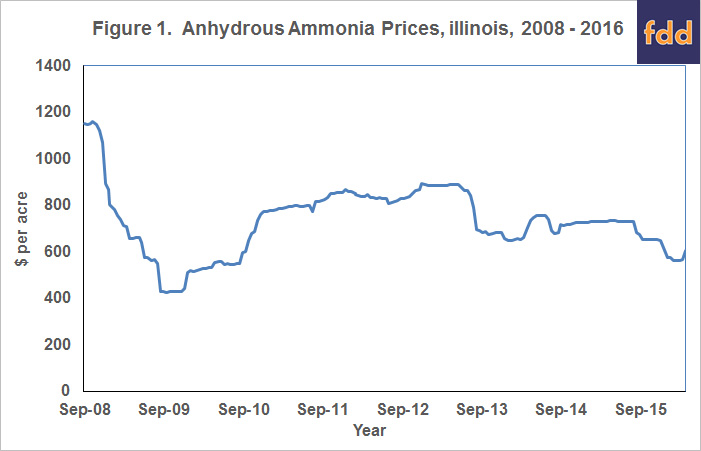 AMS also reports urea and liquid N prices. Figure 2 shows a time series of these nitrogen fertilizer prices stated on a per pound of N basis. Take, for example, an ammonia price of $733 per ton. A ton of ammonia contains 1,640 pounds of N. The $733 per ton ammonia price translates into .45 per pound of N (.45 = $605 price / 1,640 pounds of N). Since a ton of each fertilizer contains different N levels, making these adjustment places the prices of ammonia, urea, and liquid N on a more comparable basis. 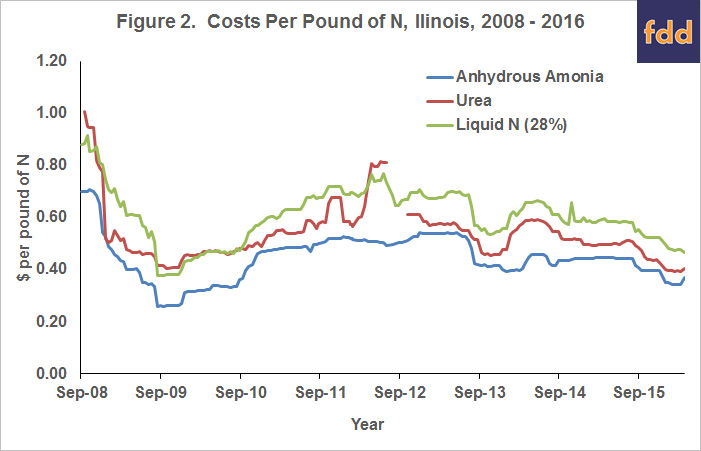 Seasonally, nitrogen fertilizer prices have been lower in the fall than during the spring. From 2009 to 2015, anhydrous ammonia prices averaged $720 per ton (slightly less than the $733 price reported above which included high 2008 prices). The September price averaged $682 per ton, 95% of the $720 yearly average price (see index column in Table 1). On the other hand, the May price of $745 per ton was 3% higher than the $720 per year). Note that there is considerable variability from year to year. Sometimes prices are lower in the spring than the fall. 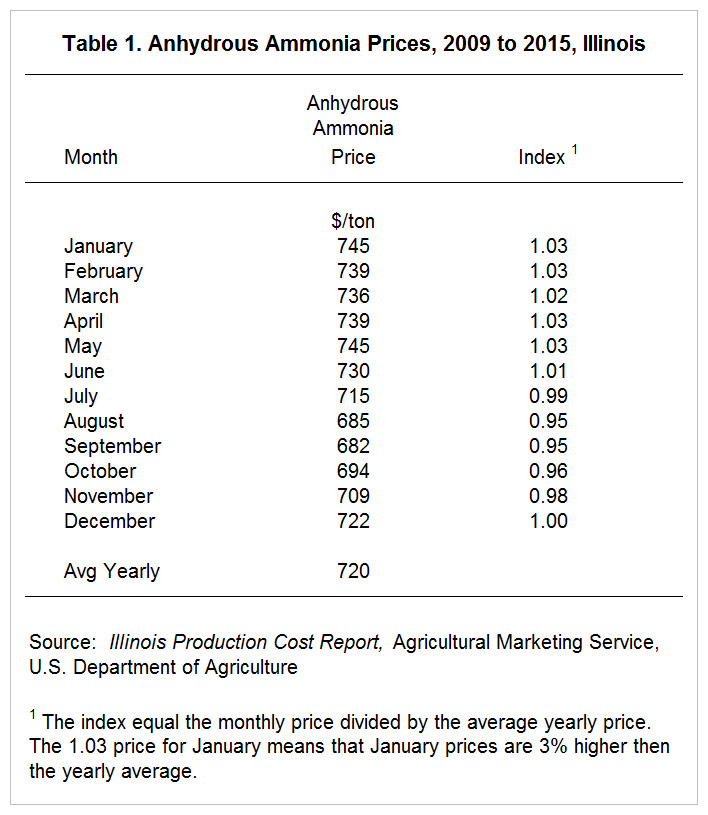 Fertilizer price trends illustrated in this article influence farmers’ fertilizer decisions. Fall application of anhydrous ammonia often are one of the lower cost methods of applying a set amount of nitrogen. Anhydrous ammonia typical is a lower cost fertilizer on a per pound of N basis. And, nitrogen prices tend to be lower in the fall.

Moving fertilizer applications to the spring an early summer likely increase the costs of providing a pound of N to the field. Higher seasonal prices during the spring have some impact on this increase. More importantly, nitrogen solutions likely become preferred to anhydrous ammonia in the spring due to timing and field considerations giving nitrogen solution applications advantages over ammonia applications. From an economic perspective, movement from fall to spring application likely requires yield increases, nitrogen rate reductions, or other benefits. Depending on the timing of the spring application, another benefit may be the reduction in cost from not applying a nitrogen loss inhibitor. Continued experimentation likely will find ways to increase the economic attractiveness of spring and summer nitrogen applications.