Reasonably complete 2015 crop insurance payment information now exists, allowing for an assessment of loss performance in 2015. Overall, losses across all U.S. policies were below average. Corn, soybeans, and cotton had low losses. Rice and peanuts had high losses. Most of the western corn-belt had low losses. In the corn-belt, large losses occurred in Missouri and in a band of counties in northeast Illinois, northern Indiana, and northwest Ohio. Over the past decade, loss ratios averaged less than total payments.

The Risk Management Agency (RMA), an agency of the U.S. Department of Agriculture, administers Federally regulated and subsidized crop insurance programs. Data from RMA contained in the Summary of Business is reported in this article. At this point, 2015 crop insurance payment data are relatively complete with one exception. Cotton STAX payments are not included in the Summary of Business database. The inclusion of cotton STAX losses, along with late entering data, will marginally increase overall 2015 loss ratios presented in this article. 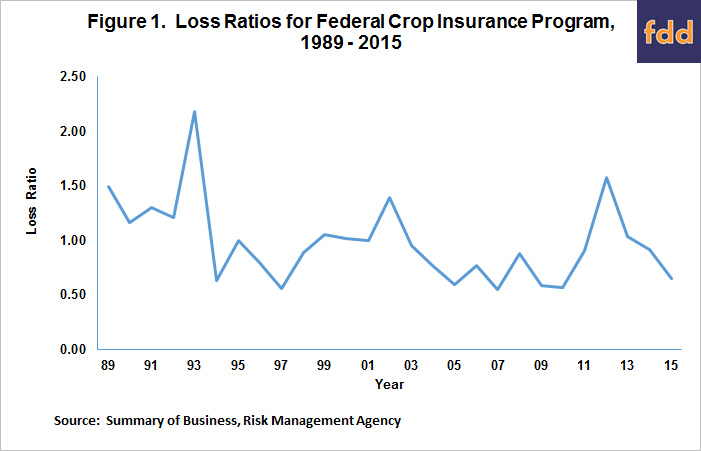 Over time, RMA has maintained a loss ratio below 1.0, meaning that payments have been below total premiums. Loss ratios have varied over time, reflecting the yield and price uncertainty that exists in agriculture. For instance, the overall loss ratio was 1.56 in 2012, the year that a large drought impacted production in the Midwest. More often, payments do not exceed premium. From 2000 to 2015, the overall loss ratio was below 1.0 in 75% of the years. This type of performance likely will continue into the future: Loss ratios will be below 1.0 in most years with large loss years occurring sporadically. 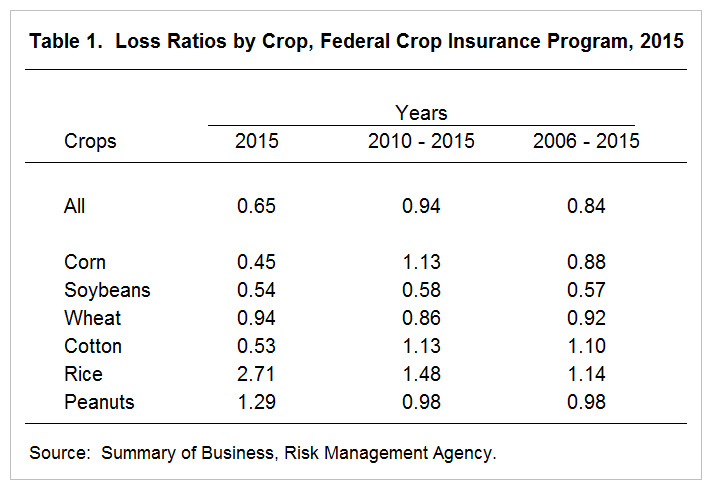 Figure 2 shows a map with loss ratios indicated for each county. These 2015 loss ratios are aggregated across crops and are weighted by total premium. Counties within the corn-belt had mixed losses. Most counties in the western corn-belt in Iowa, Minnesota, Wisconsin, North Dakota, eastern South Dakota, and eastern Nebraska has loss ratios below .50. Several areas in Missouri and the eastern corn-belt had high loss ratios. Counties in Missouri and in a band of counties from northeast Illinois, through northern Indiana, and ending in northwest Ohio had loss ratios above 1.5. These areas had low yields due to an extremely wet spring and early summer. 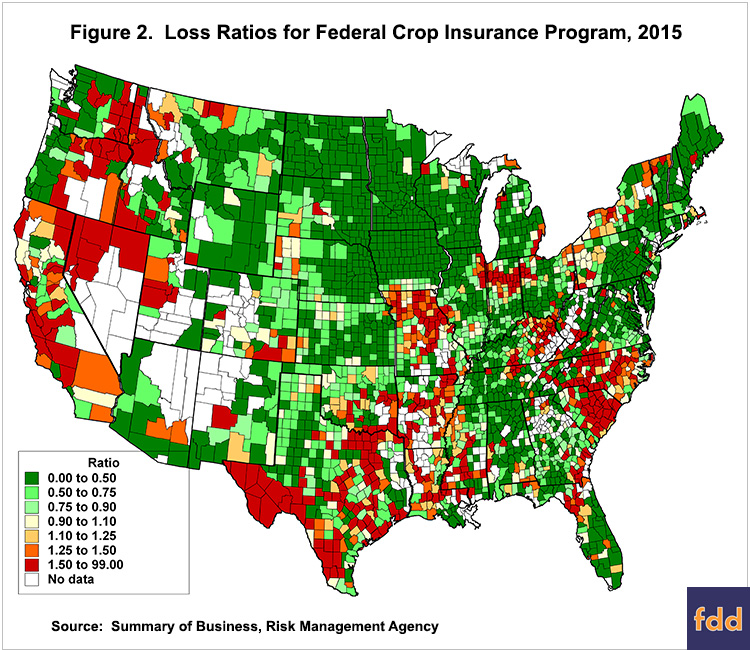 Overall, 2015 was a low loss year in aggregate. As a result, most of the counties within the United States had low losses. However, as is typically the case, some areas had high losses.