An underlying principle of income statement preparation is to match revenues with costs. For most grain farms, this means that income statements prepared for the 2015 calendar year reflects costs and revenues associated with 2015 production. Not all of 2015 production has been sold at the end of 2015 on most grain farms. In these cases, values must be placed on unsold grains so that a 2015 income statement reflects revenues associated with unsold production. This is usually accomplished by valuing grains at prevailing market prices at the end of the year. These grain inventory values are shown on the 2015 end-of-year balance sheet, and the 2015 income statement includes revenue for grain inventory changes from the beginning to ending of the year. This process results in yearly income statement reflecting income from that year’s production, plus any marketing gains on grains produced in the previous year but priced in the current year, as well as changes in valuations on other items made on end-of-year balance sheets.

Marketing gains can vary tremendously across farms as grain marketings vary across farms. In this article, marketing weights published by the National Agricultural Statistical Service (NASS) will be used to represent selling patterns in order to access marketing gains. 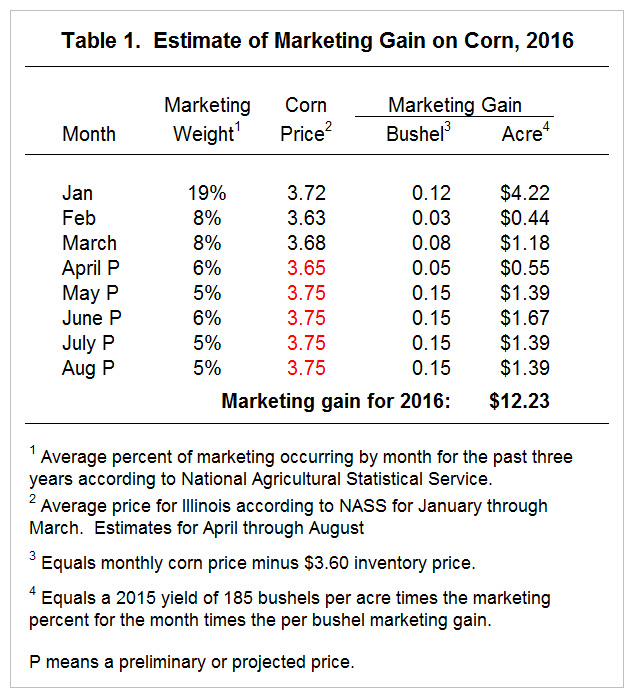 The average 2015 yield on high-productivity grain farms in central Illinois was 185 bushels per acre. If 57% is marketing in the following year, the 185 bushel yield gives results in 105 bushels per acre of inventory. For FBFM farms, end-of-year inventories were valued at $3.60 per bushel. 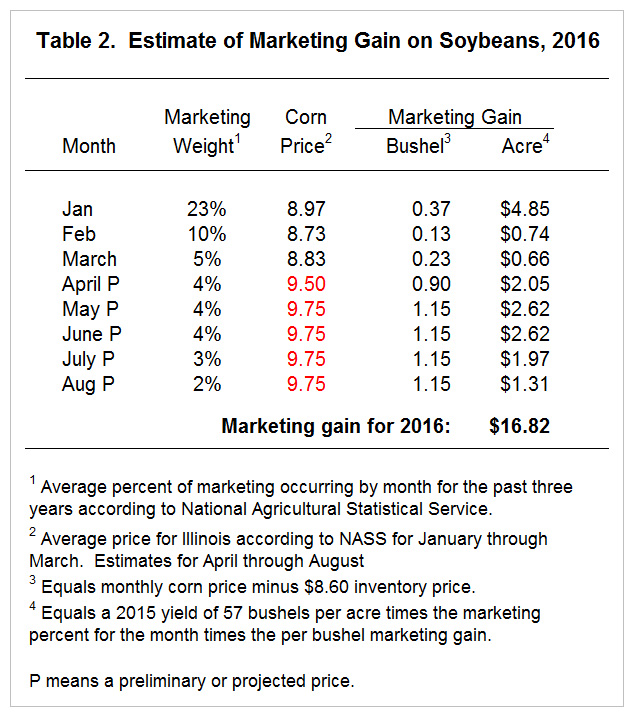 Marketing gains will be positive for many grain farms in 2016. Estimates suggest average gains of $12.23 per acre for corn and $16.82 per acre for soybeans. For a farm with 60% of its acres in corn and 40% in soybeans, these marketing gains average $14.06 per acre. These estimates will vary across farms because of differences in grain selling practices.

Schnitkey, G. "Marketing Gains Impacts on 2014 and 2015 Net Incomes on Grain Farms." farmdoc daily (5):97, Department of Agricultural and Consumer Economics, University of Illinois at Urbana-Champaign, May 27, 2015.