Today’s article summarizes actual use of both programs for the initial year of availability in 2015 using data from the Risk Management Agency’s (RMA) Summary of Business files. Usage data reflects the design and eligibility rules associated with the SCO and STAX programs.

Background on SCO and STAX

SCO is intended to be available for a wide range of crops, with coverage eligibility potentially limited by the farmer’s choice of commodity program. Specifically, program crops with base acreage enrolled in either of the Agriculture Risk Coverage (ARC) programs are ineligible for SCO. Only crop base enrolled in PLC can add the SCO coverage to supplement the underlying individual insurance plan being used by the farmer. Use of SCO requires the farmer to purchase an underlying individual plan of insurance through the yield protection (YP), revenue protection (RP), or revenue protection with the harvest price exclusion (RP-HPE) plans.

SCO was initially made available in 2015 for barley, corn, cotton, rice, sorghum, soybeans, and wheat (see county-level maps of availability by crop here), with planned expansion to more crops and regions in future years. SCO provides supplemental county-based coverage to cover a portion of the farmer’s crop insurance deductible, with the amount and type of coverage varying based the farmer’s choice of underlying individual insurance plan. SCO premiums are subsidized at a rate of 65%. More information on SCO can be found in the farmdoc daily articles from April 24th, 2014 and February 27th, 2014 as well as in the RMA fact sheet available here.

The STAX program can be purchased by cotton growers in conjunction with another crop insurance policy (including the YP, RP, and RP-HPE individual plans as well as Area Risk Protection Insurance policies), or it can be used on its own. STAX offers area revenue coverage with a maximum coverage band of 20% and a fixed trigger level of 90% of the area revenue guarantee. STAX premiums are subsidized at a rate of 80%. More details on the STAX program are available in the RMA fact sheet available here.

While the use measures reported in table 1 for SCO seem low, particularly for corn and soybeans, it is important to keep in mind the relationship between SCO eligibility and the farm program choices made as part of the 2014 Farm Bill, as well as how SCO coverage works in relationship to the underlying individual insurance plan. Table 2 provides the average crop insurance coverage level (for all RP, RP-HPE, and YP policies, weighted by net insured acres) and the enrollment rate in the PLC program for each commodity based on data from the Farm Service Agency (FSA).

The very low levels of SCO use for corn and soybeans should not be surprising given that these crops had very low enrollment rates in PLC, making the vast majority of corn and soybean acres planted each year ineligible for the SCO program. Furthermore, the higher the coverage level on the individual plan coupled with SCO the smaller the share of total liability that SCO could represent. Corn and soybeans have the highest average coverage levels elected by producers, both being above 75%.

Wheat, barley, and sorghum all had much higher enrollment rates in PLC making a larger share of planted acreage in those crops eligible for SCO coverage each year. The average insurance coverage levels for these crops is also lower, with wheat and barley just over 70% and sorghum under 68%. Both of these factors imply higher potential use of SCO, which is reflected in the data in table 1.

Finally, nearly all rice base was enrolled in PLC, thus making nearly all rice acreage likely eligible for SCO coverage. Rice farmers also have the lowest average insurance coverage level for the crops reported in table 2 at just under 67%. Again, both of these factors would lead to higher potential use for the SCO program which was shown for 2015.

Use numbers for the STAX program on cotton acreage exceed those on all other crops for SCO. This is also not surprising given that cotton was not eligible for either the ARC or PLC programs. This, combined with the fact that STAX use does not have an underlying insurance plan requirement, increases the both the incentives and potential for use of the program by cotton growers. 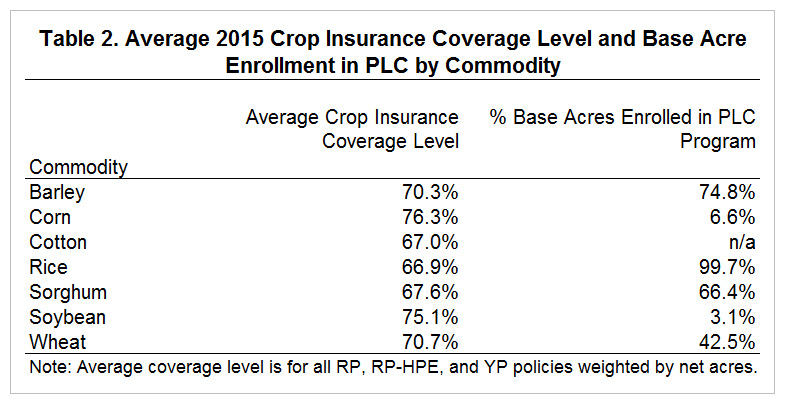 The 2014 Farm Bill introduced two new crop insurance programs which were designed to provide coverage to supplement that which was already provided by existing insurance programs. SCO can be coupled with coverage under an individual plan of insurance (RP, RP-HPE, or YP) and provides supplemental area-based coverage for a portion of the farmer’s deductible. The SCO program is available for a range of crops, with eligibility limited by the farmer’s choice of commodity program (i.e. PLC or ARC). The STAX program was created only for upland cotton producers, and provides area revenue coverage either on its own or in conjunction with an underlying plan of insurance.

Both programs were made available for the first time in 2015, and data from the RMA shows that use follows what would be expected based on the design and eligibility rules associated with the programs. Use of SCO is lowest for corn and soybeans, likely due to their high enrollment rates in the ARC program and relatively high average coverage levels elected by farmers under the existing individual plans of insurance. SCO use was slightly higher for barley, sorghum, and wheat where a larger percentage of base acres were enrolled in PLC and average individual insurance coverage rates are lower. SCO use is greatest for rice where nearly all base acreage was enrolled in PLC and the average coverage rate is the lowest among the crops examined. STAX use in cotton is greater than SCO use in all other crops, reflecting the fact that there are no eligibility limitations associated with a commodity program for cotton as well as the fact that STAX can be used alone or to supplement another insurance program.