Due to the low price of wheat and heavy late season rains in several world production areas, notably France and other parts of Europe; the U.S. Department of Agriculture (USDA) increased world feeding of wheat during the 2016/2017 crop year by nearly 300 million bushels in the July 2016 World Agricultural Supply and Demand Estimates (WASDE). Feed and residual use in the U.S. was increased by 100 million bushels to 300 million bushels. Even at this early stage of the 2016/2017 crop year, the amount of wheat fed to livestock will be a key pricing factor in the U.S. and international grains market. This article therefore updates a farmdoc daily article from October 25, 2012 that examined the historic role of wheat feeding in the U.S. and the factors associated with it. 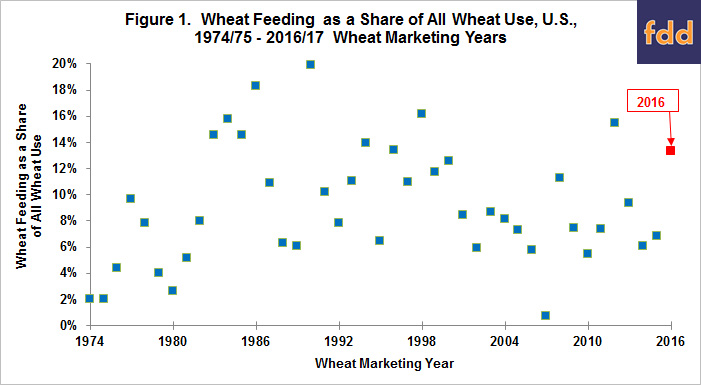 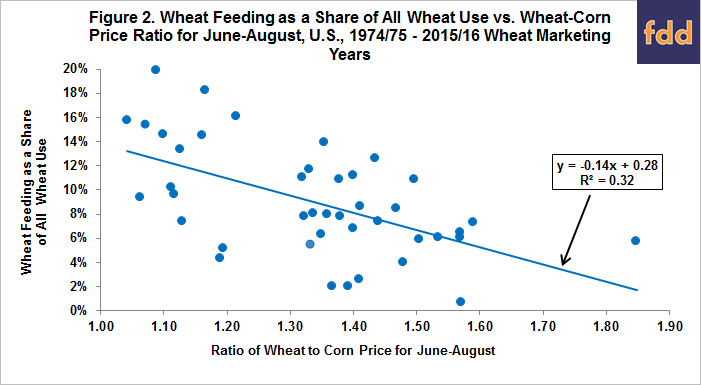 Economics also suggests that, everything else the same, the higher is the ratio of livestock and livestock product prices to livestock feed prices, the greater is the share of wheat that should be fed. The decision to use any ingredient, including wheat, in a livestock feed ration is a complex management decision. Energy and nutritional needs in a balanced ration are specific to both animal species and type of animal within a species. Moreover, changing the role of wheat in a ration during a feeding cycle can materially reduce feed efficiency. Hence, livestock feeders want to be relatively certain that wheat will remain a cheaper source of feed throughout the feeding cycle. This consideration may partially explain why the share of wheat that is fed is positively and statistically significantly correlated in adjoining years, +0.40.

The preceding discussion also argues for a longer term measure of the livestock-feed price ratio. Because the data on wheat feeding is by wheat crop year, this ratio is calculated for the wheat year. Specifically, it is based on an average of the 6 livestock feed-price ratios reported by USDA, NASS (see data note 4 for specifics on how the ratio is calculated). The average livestock-feed price ratio for the wheat crop years beginning with 1974/75 is 1.01, with a range of 0.59 for 1974/75 to 1.56 for 1986/87. The livestock-feed ratio for June 2016 is 0.97, or slightly below average. 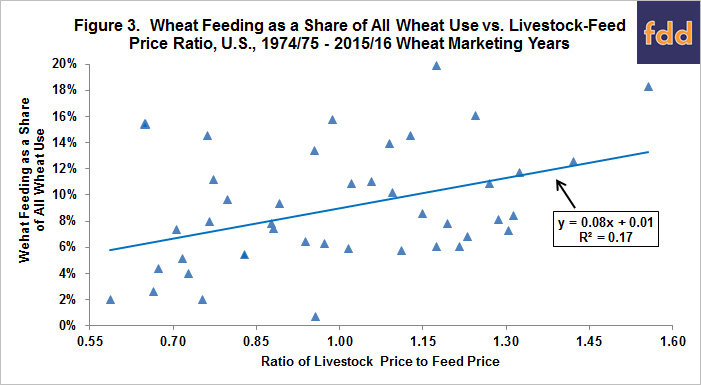 Explanatory power of the variation across wheat crop years in the share of wheat fed jumps to 63% when both variables are evaluated together (see Figure 4). The estimated 2-variable equation is reported in data note 5. This analysis illustrates the potential importance of multiple variable regression when evaluating economic relationships. 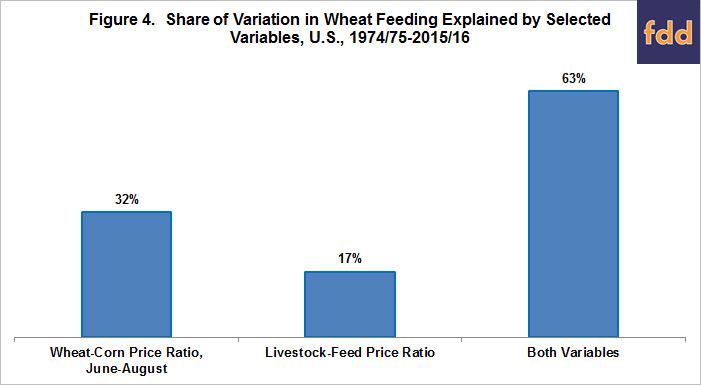 If we assume that the wheat-corn price ratio and livestock-feed price ratio for June 2016 are the values for the 2016/17 wheat crop year and use the equation reported in data note 5, the amount of feed and residual use of wheat during 2016/17 is estimated to be 289 million bushels. This estimate is quite close to the current USDA estimate of 300 million bushels.