There is a long-standing market saying that “big crops get bigger and small crops get smaller.” This statement refers to the yield forecasting cycle of the USDA’s National Agricultural Statistics Service (NASS). That cycle for corn and soybeans consists of monthly yield forecasts that begin in August and extend through November and culminate with the final yield estimate for the season that is released in January following harvest. Specifically, the statement implies that early NASS yield forecasts are “conservative” in years when yields are high and get larger as the forecast cycle progresses and are “optimistic” in years when yields are low and get smaller as the forecast cycle progresses. These notions are tied to the more general idea that NASS yield forecasts are “smoothed,” meaning that the final yield estimate results from cumulative monthly changes in forecasts in the same direction. Some tend to believe that smoothing of NASS yield forecasts, particularly in years of yield extremes, is intentional in order to minimize or spread the price impact of very large or small yields. Alternatively, yield forecasts may appear to be intentionally smoothed simply due to the fact that forecasts become more accurate during the forecast cycle as more actual yield information is incorporated into the forecasts.

The general issue of smoothing of NASS corn and soybean production forecasts was analyzed by Isengildina, Irwin, and Good (2004), and specifically, whether big crops get bigger and small crops get smaller was examined by Isengildina, Irwin, and Good (2013). We updated and extended the analysis of Isengildina, Irwin, and Good (2013) in two farmdoc daily articles (August 20, 2014, September 10, 2014). The statistical evidence from this body of work simply does not support the conclusion that big corn and soybean crops get bigger or small crops get smaller. Yet, there continues to be widespread belief that there is substantial truth in the old market adage. Perhaps the reason that the belief persists is that we have not adequately explained why those relationships do not hold up under examination. Here, we take another look at the question with the emphasis on explaining why this widespread market belief is actually a myth. Our analysis focuses on September USDA corn and soybean forecasts because that is most relevant to the questions being raised about potentially big 2016 yields becoming even bigger.

We use U.S. average yield forecasts and final estimates for the 46 year period from 1970 through 2015. A big crop is defined as a crop with an average yield (or yield forecast) above trend value. Trend for a particular year is calculated based on actual U.S. average yield (January estimate) from 1960 through the year prior to the current year. For example, the 1970 trend yield is estimated based on 1960-1969, the 1971 trend yield is based on 1960-1970, and so on. The analysis starts with the traditional (but erroneous) approach to evaluating the “big crops get bigger and small crops get smaller” issue and is illustrated in Figures 1 and 2 for corn and soybeans, respectively. Plotted on the horizontal axis is the magnitude of the difference between the final yield estimate released in January and the trend yield calculation for that year. Positive observations indicate the actual yield was above trend (large) and negative observations indicate the actual yield was below trend (small). Plotted on the vertical axis is the magnitude of the change in yields from the September forecast to the January estimate. Positive (negative) observations indicate that the final yield was above (below) the September forecast. 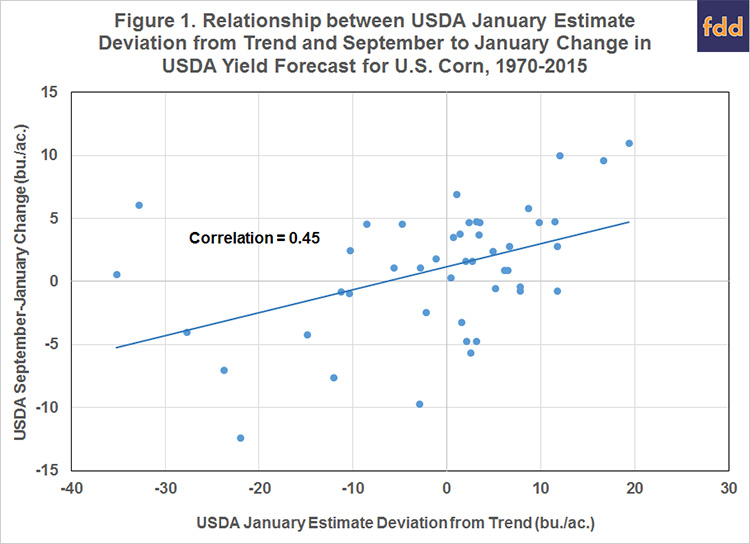 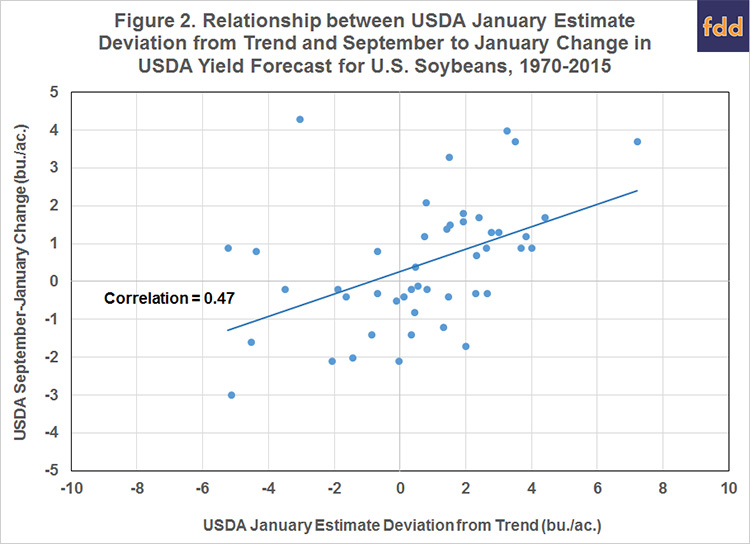 The results are obviously mixed in that the direction and magnitude of the change in yield from September to January varies a lot regardless of whether the January yield estimate is above or below trend. However, the slope of the linear fit of the relationship is positive and the magnitude of the correlation between yield change and the magnitude of the final yield estimate relative to trend is a respectable 0.45 for corn and 0.47 (1.0 indicates perfect correlation), which appears to provide concrete evidence that large crops get larger and small crops get smaller. It is not surprising that this relationship leads many to support the notion that large (small) crops get larger (smaller).

So what is wrong with this conclusion? The underlying problem is that at the time the September yield forecast is made, it is not known what the final yield estimate in January will be–above trend (large) or below trend (small) or what the magnitude of the yield change will be from September to January. The analysis based on Figures 1 and 2 is actually backward-looking. Specifically, it addresses the question: Did what turned out to be a big (small) crop get larger (smaller) across the NASS forecasting cycle. This is fundamentally ex post, or after the fact, analysis. The relevant question is instead: Does what appears to be a large (small) crop in September get larger (smaller) by January? The September yield forecast may point to an above or below trend yield, but as observed in Figures 1 and 2, yield estimates can change considerably from September to January so that what is believed to be a large or small crop in September may not actually turn out to be true. 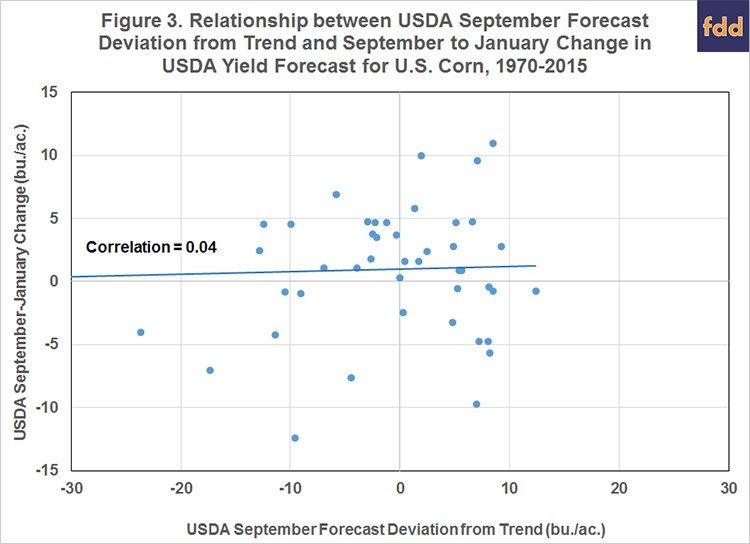 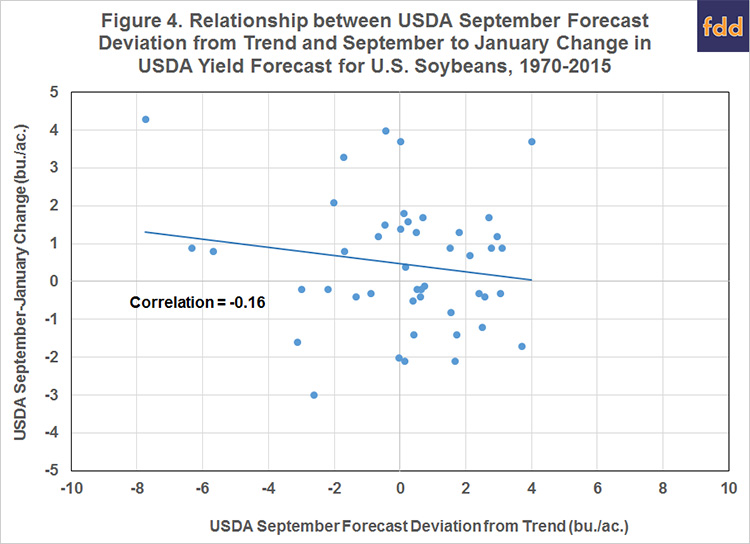 The relationships displayed in Figures 3 and 4 are in sharp contrast to the results in Figures 1 and 2. The slope of the linear fit of the relationship is near zero for corn and actually negative for soybeans. The magnitude of the correlation between yield change and the magnitude of the September yield forecast relative to trend is near zero for corn and very small, but negative, for soybeans. Viewed properly, then, the data do not support the notion that what appear to be large (small) crops do not necessarily get larger (smaller).

The relationship between yield change and the magnitude of the September yield forecast relative to trend could also be quantified in other ways. The previous analysis of the relationship includes both direction and magnitude. Do the results change if only the direction of the relationship is considered? That is, if the September yield forecast is above (below) trend, how frequently has the yield estimate increased or decreased from September to January. Those counts can be made directly from Figures 3 and 4 and are summarized in Tables 1 and 2 for corn and soybeans, respectively. 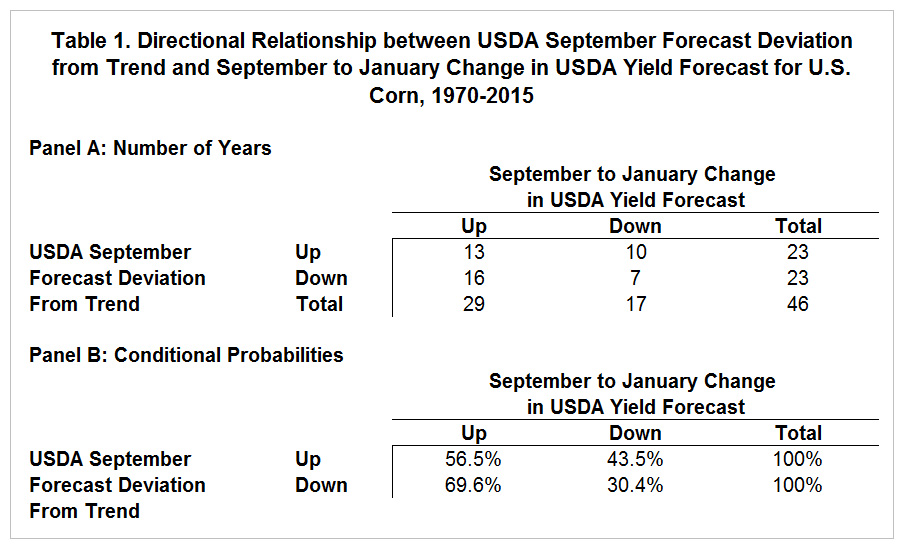 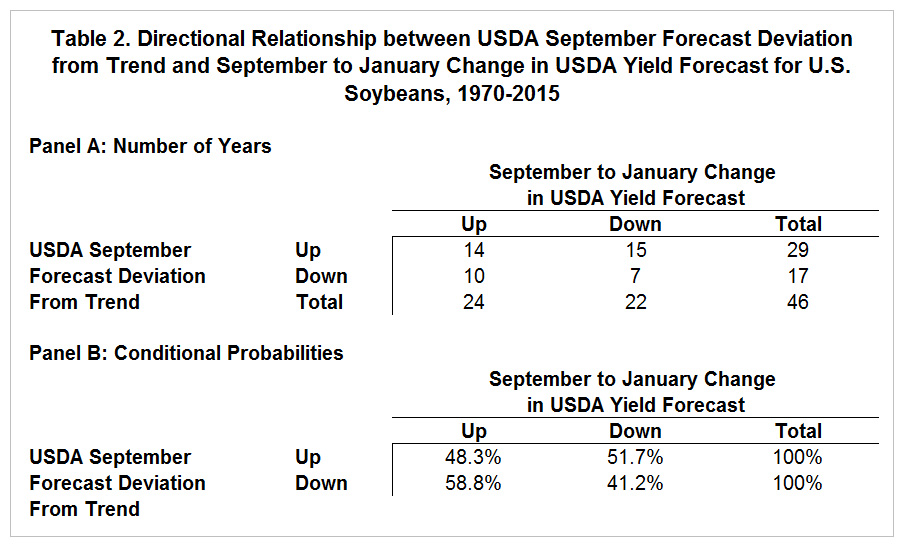 These directional results also do not support the notion that big (small) crops get bigger (smaller). The key is that the conditional probabilities for the up/up and down/down cells in Tables 1 and 2 are either quite close to 50% (a coin flip) or indicate a reversal pattern instead of a continuation pattern. 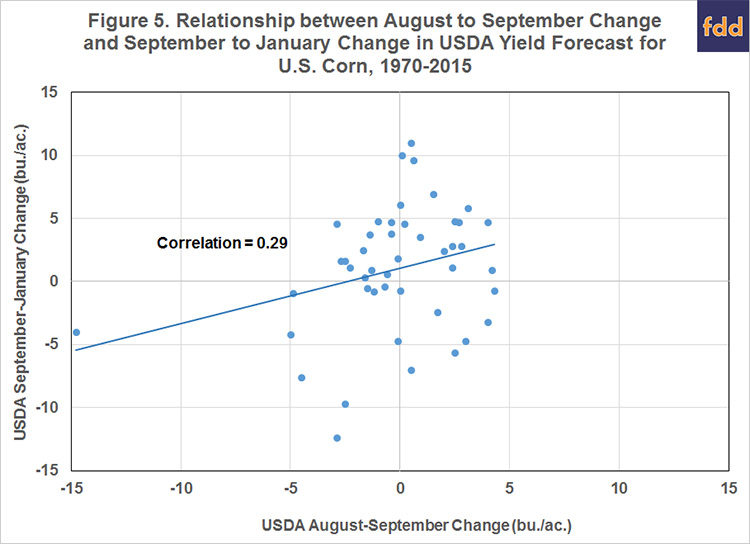 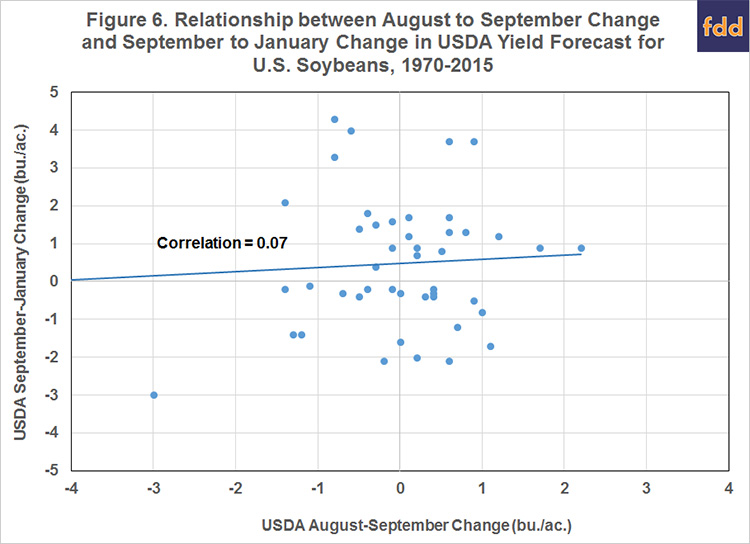 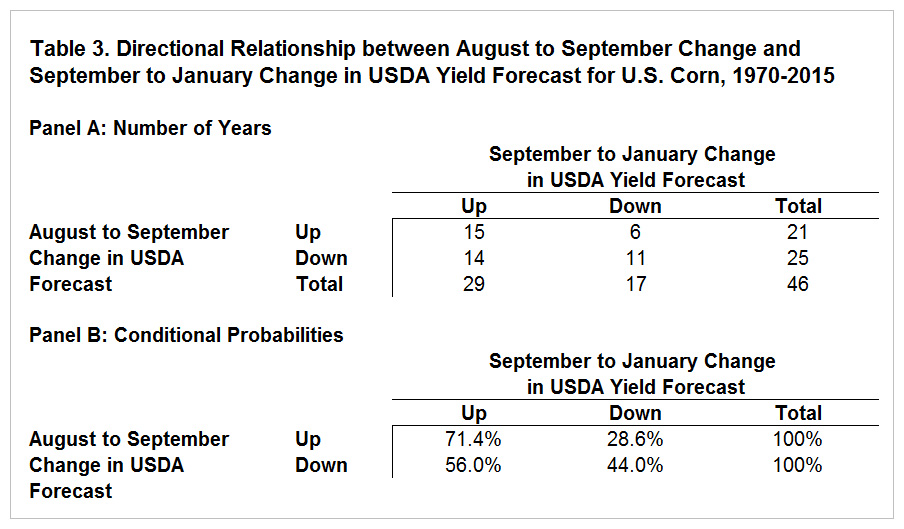 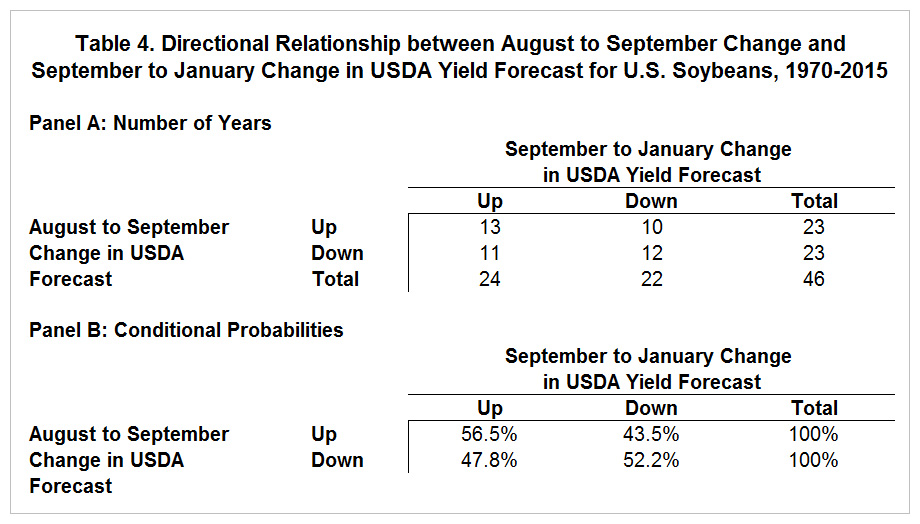 The September 2016 NASS yield forecasts of 174.4 bushels for corn and 50.6 bushels for soybeans are both well above trend value. Many are arguing that these forecasts will become larger based on the old adage that “big crops get bigger and small crops get smaller.” Our analysis clearly suggests that expectations for the direction and magnitude of change in those yield estimates between September and January should not be influenced by the fact that early (September) forecasts are above trend. The evidence usually cited as justification for this marketing adage is actually backward-looking and biased because it is based on information (final January yield estimates) that is not available in real-time. In other words, the variability of September to January changes in NASS corn and soybean yield estimates is too large in most years to reliably determine whether the crop is truly “large” or “small” early in the forecasting cycle. One is then left with forming yield expectations based on a careful analysis of growing season weather conditions, end-of-season crop conditions, August to September changes in NASS forecasts, and early yield results. Those factors (particularly early yield results) this year point to a slightly smaller corn yield estimate and a larger soybean yield estimate in January. The USDA’s next Crop Production report to be released on October 12 will provide additional insight into the likely magnitude of the final 2016 yield estimate for corn and soybeans.

Isengildina, O, S.H. Irwin, and D.L. Good. "Do Big Crops Get Bigger and Small Crops Get Smaller? Further Evidence on Smoothing in U.S. Department of Agriculture Forecasts." Journal of Agricultural and Applied Economics 45(2013):95-107.