Since 1973, crop commodity programs in the farm bill have largely been transformed to policies that make payments to farmers from policies that support and increase market price. Payment was usually triggered by low price, with the goal of helping farm income during multiple years of low or depressed prices. The last two farm bills have included a policy option that makes payment triggered by low revenue using a combination of price and yield declines. By taking into account yield as well as price, revenue arguably is a more inclusive payment policy. We explore this matter further by comparing changes in price, yield per planted acre, and revenue per planted acre in the current low price environment and one from the late 1990s.

Because multiple year price declines (and increases) extend across crops, the index of prices received for all crops is used to identify periods of multiple year declines. No comparable index exists for revenue. Two multiple year decline periods have occurred since the use of price support policies was minimized by the 1985 and 1991 farm bills: 1997-2001 and 2013 through at least September 2016. Although the all crop price index bottomed in calendar year 2000, the 2001 crop year was used as the last year because the price of rice, soybeans, and upland cotton bottomed in that crop year. Note that 1997-2001 contains 5 crop years while 2013-2016 contains 4 crop years. Percent change in revenue, price and yield is calculated relative to the average revenue, price, and yield for the 3 crop years that end in the peak year of 1996 and 2012. A 3 year average provides a more accurate measure of the underlying strength of the revenue and price increase that preceded the multiple year declines. A composite average percent change is calculated for barley, corn, oats, rice, sorghum, soybeans, upland cotton, and wheat. Corn, soybeans, and wheat are also examined individually. The data used in this analysis are from the US Department of Agriculture’s QuickStats data base and the September 2016 World Agricultural Supply and Demand Estimates. See data note 1 for a discussion of the calculation of yield per planted acre. See data note 2 for a discussion of the decline that occurred during the early to mid-1980s and why it was not included in the analysis.

Yield has increased strongly during the current period of revenue and price decline (see Figure 1). As a result, decline in revenue/acre is notably smaller than decline in price. For example, the currently expected yield and price for the 2016 crop year results in a composite revenue decline of 22% compared with a composite price decline of 34%. In contrast, composite yield increased only 2% to 3% during 1997-2001, resulting in little difference between the declines in composite revenue and price (see Figure 2). Overcompensation is thus a bigger potential policy issue during the current decline period than during the 1997-2001 decline period. 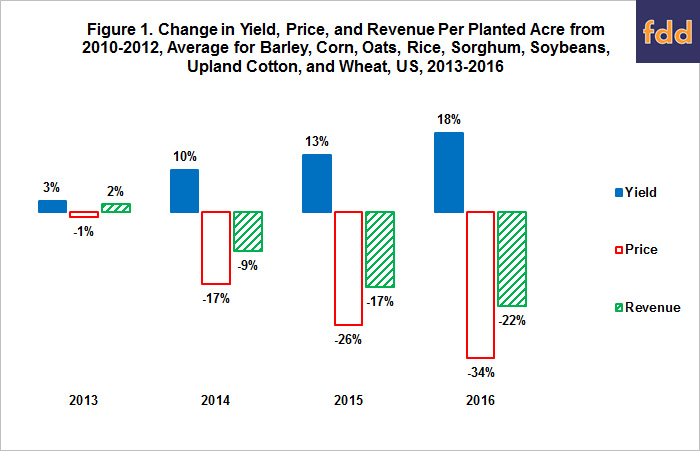 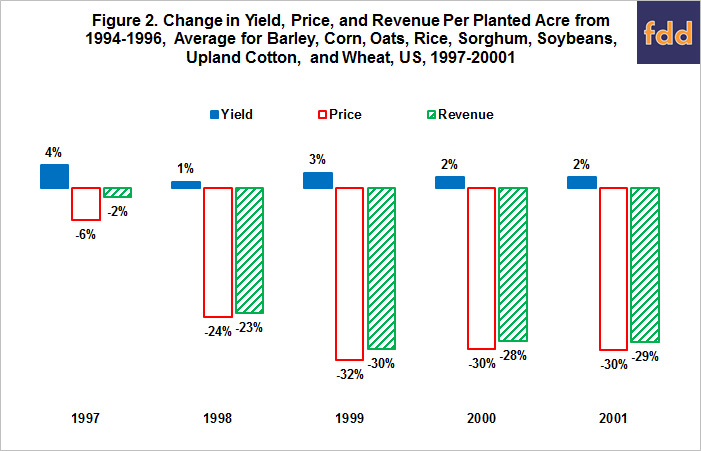 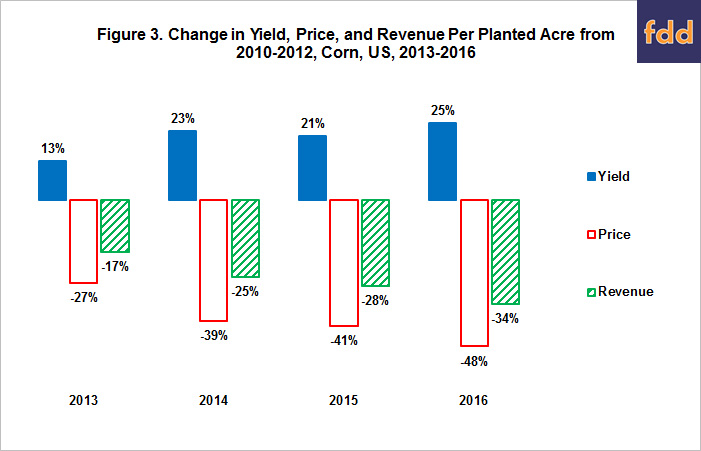 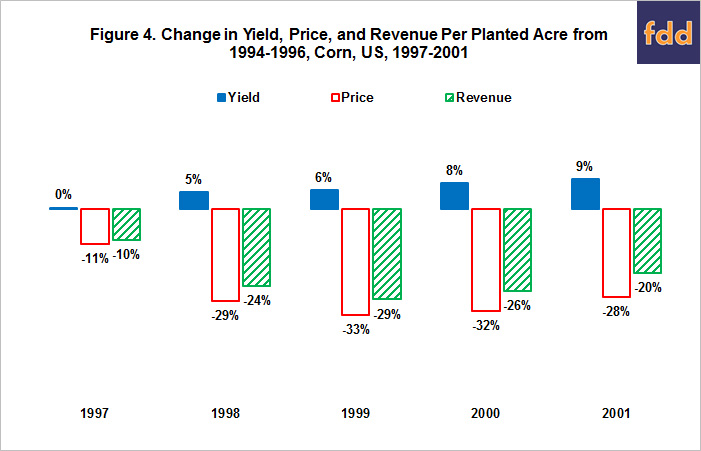 Like corn and the crop composite, soybean yields have increased strongly during the current decline period (see Figure 5). As with the crop composite, yield changes during 1997-2001 were minimal, resulting in similar declines in soybean revenue/acre and price (see Figure 6). In fact, yield of the 1999 and 2000 soybean crops was slightly lower than in its baseline period. As a result, the decline in revenue was slightly larger than the decline in price for these crop years. 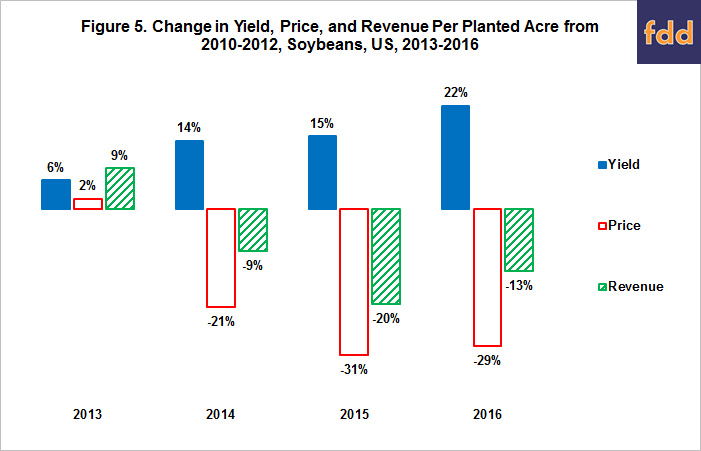 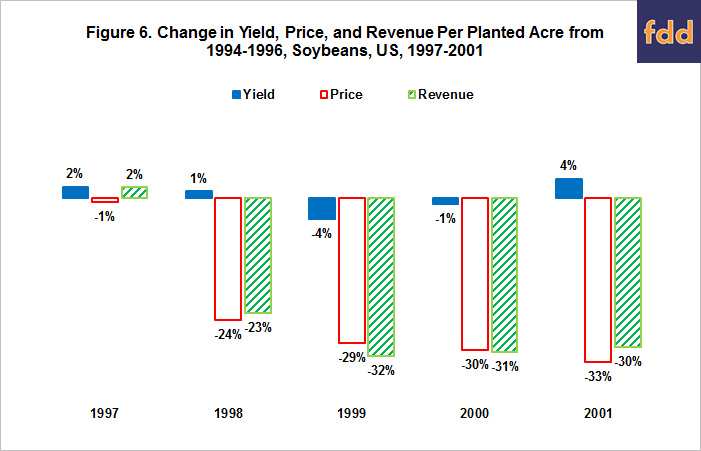 Yield declines have been a feature of US wheat during the current decline period (see Figure 7). Relative to the 2010-2012 baseline, average US yield was lower in 2013, 2014, and 2015. As a result, revenue declines exceeded price declines, especially in 2013. For all but 2001 during the 1997-2001 decline period, substantial yield increases resulted in revenue/acre declines that were smaller than the declines in price (see Figure 8). 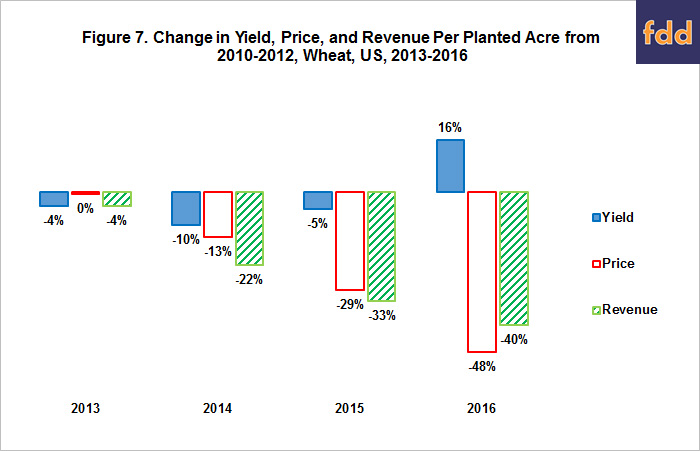 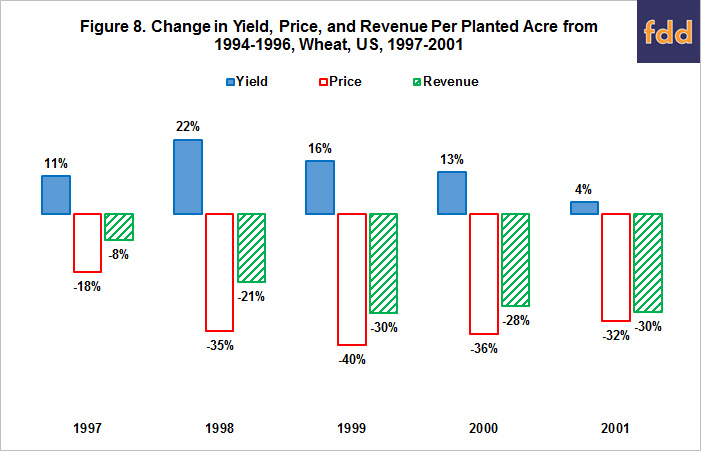 1. Yields are calculated per planted acre by dividing production by acres planted for a crop year. For corn and sorghum, acres harvested for silage are subtracted from planted acres. Yield per harvested acre is used for oats since a large share of oats is planted as a cover crop.