Figure 1 shows current ratios averaged for Illinois farms enrolled in Illinois Farm Business Farm Management (FBFM) who completed usable balance sheets. A current ratio equals current assets divided by current liabilities. Current assets include cash and cash equivalents; crop, feed, and market livestock inventories; and prepaid expenses. Current liabilities include operating loans; current portions of longer-term debt; accounts payable; and accrued items such as income taxes. A current ratio measures the farm’s ability to pay back short-term liabilities with short-term assets. Ratios below 1.00 suggest that a firm will be unable to pay back its obligations without resorting to financial restructuring. Having additional abilities to meet obligations, as indicated by having higher current ratios, is desired. A textbook benchmark for an acceptable current ratio is something above 2.00. 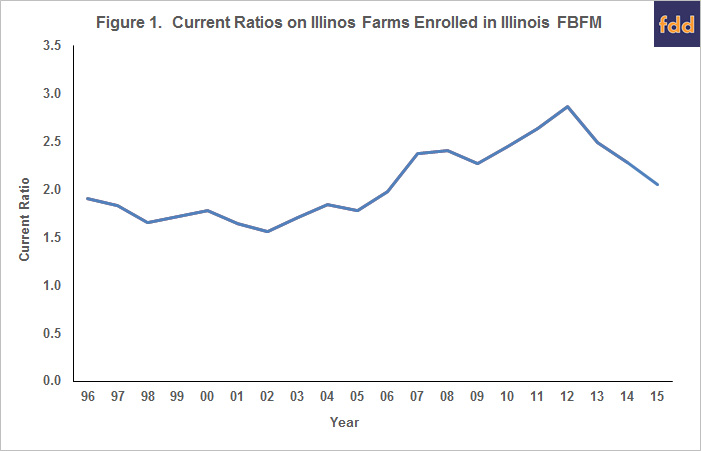 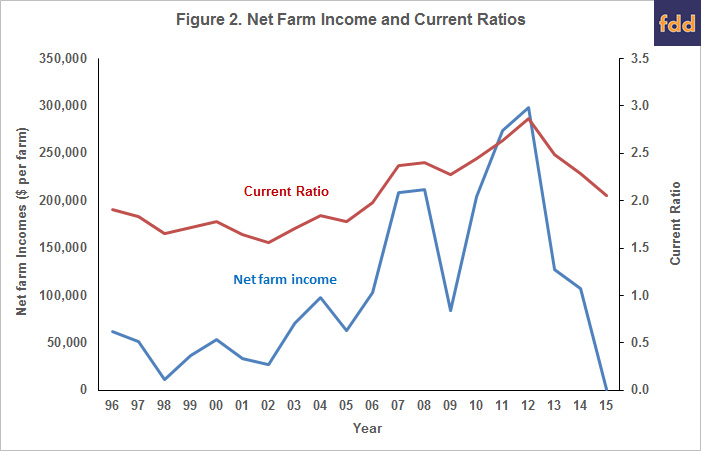 Net income on grain farms enrolled in FBFM averaged $500 per farm in 2015. It is reasonable to expect low net farm incomes in 2016, likely somewhere near $10,000 per farm. Net incomes at this level would result in another decline in the current ratio. If the decrease was the same as last year, the current ratio will be 1.81 at the end of 2016, near the 1.76 level that occurred between 1996 through 2006. 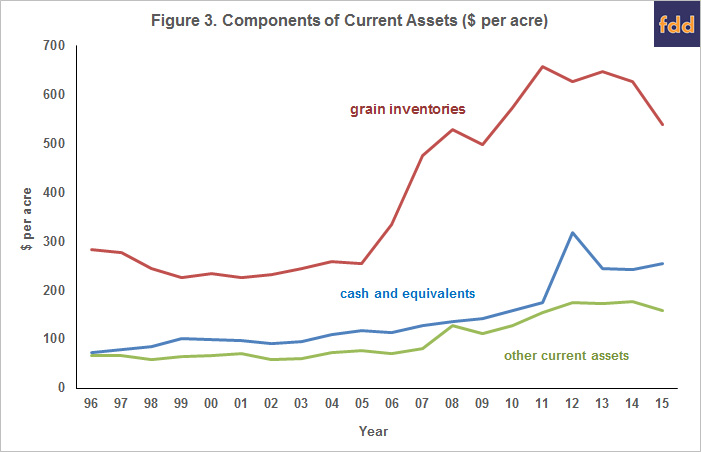 Somewhat surprisingly, cash balances have remained relatively constant in recent years: $242 per acre in 2014 and $255 per acre in 2015. On average, farmers have not reduced cash. Rather working capital changes have occurred elsewhere.

Operating note balances increased from $303 per acre in 2014 to $315 per acre in 2015. The other components of current liabilities have remained relatively steady. 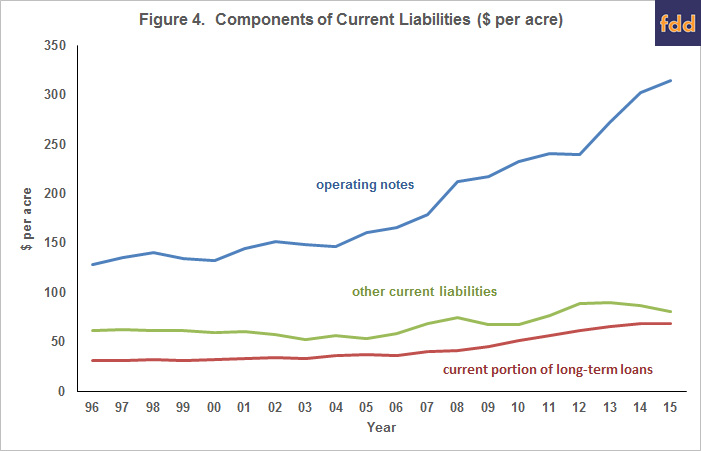 So far, much of the financial adjustments occurring on Illinois grain farms have occurred in two areas: lower grain inventories and increasing operating notes.

In the sections above, averages for working capital have been presented. There will be large variations in working capital across farms as previous decisions will impact current levels of working capital. Moreover, some of these differences are structural. For example, current ratios tend to decrease with less farmland owned. For example, farms that own less than 10% of their land had a current ratio of 1.78 at the end of 2015. The 1.78 ratio compares to a 2.33 a ratio for farms that own between 26 and 50% of their farmland. More detail on how financial ratios vary by farm type is available in the Financial Benchmark Section of farmdoc.

A gauge of whether low incomes will continue are commodity prices. As long as corn prices remain below $4.00, working capital and financial situation on grain farms in the Midwest can be expected to deteriorate. More rapid deteriorations will occur with lower commodity prices. Large cash shortfalls will occur on most farms when corn prices are $3.50 per bushel or below.

How many years of prices below $4.00 is an open question. At this point, it seems reasonable to expect low incomes into 2017 as bid prices for corn in the fall of 2017 are near $3.50 per bushel. Hence, continuing cuts in non-land costs and rents are in order.