In recent years, soybean yields in Illinois have been exceptional, leading to questions on whether technologies have caused a “jump” in soybean yields. While the 2016 state yield will be an outlier, it is too early to say that a new regime of soybean yields exists. Relative to corn yields, soybean yields must increase more to have the same relative yields as in the early 1970s.

Comparisons to trend further illustrate how high recent yields have been in Illinois (see Figure 1). Fitting a linear trend through soybean yields results in an increase of .48 bushels per year. The 2014 through 2016 yields are significantly above the trend: 5.1 bushels in 2013, 4.6 bushels per acre in 2015, and 10.1 bushels per acre in 2016. The 2016 yield is a statistical outlier. Only one other yield has been 10 bushels away from the 1972-2016 trend, that being in the 1988 drought year when the actual yield was 11.5 bushels below trend. 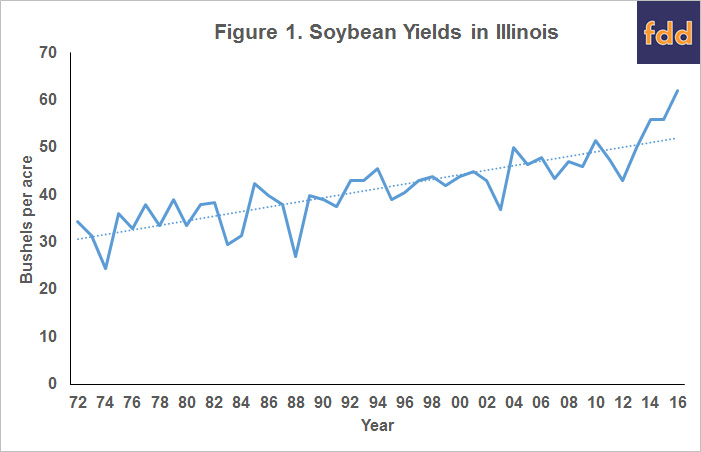 Why are Soybean Yields High?

Recent high soybean yields then lead to the question of what is causing the high yields. Have growing conditions been abnormally good in the past three years, leading to the high yields? Or has technology changed such that a higher yield should be expected in the future? Perhaps genetics have improved, or farmers’ use of fungicides and other inputs have been leading to higher yields.

This question – is it good weather or technology changes – is difficult to answer from just observing time series of data. Two contradictory thoughts. Recent yields have been high, and the 2016 yield is a statistical outlier, suggesting technology changes. On the other hand, historical jumps in yields or trends have rarely occurred in the last 50 years. For example, corn yields appeared to be increasing at a faster rate after 1995 than before 1995. Belief in an increasing yield trend decreased after the poorer yields of 2010, 2011, and 2012. The recent high soybean yields in recent years may simply be a signal of exceptional growing conditions. 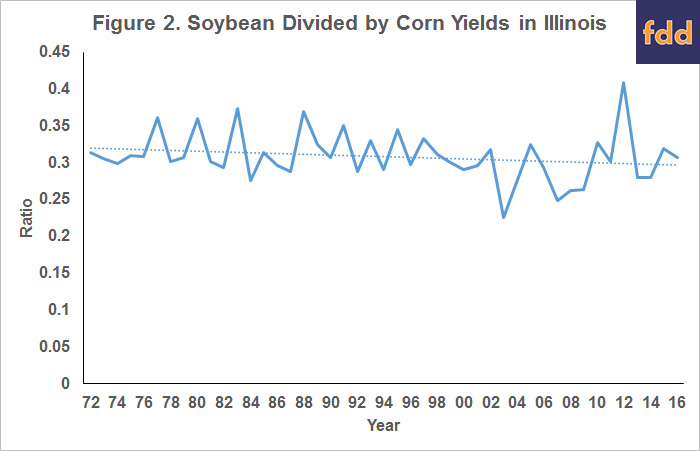 Over time, soybeans-to-corn yields have been trending downwards. An expected level of soybean-to-corn yields in 1972 was .32. The .31 value in 2016 is below the expectation in 1972. The Illinois state yield for 2016 is projected at 202 bushels per acre. For a .32 soybean-to-corn yield ratio to result in 2016, soybean yield would have to be 64.6 bushels, 2.6 bushels higher than currently projected.

Soybean yields in Illinois have been exceptional in recent years, with yields being much higher than trend yields. It is too early to say that a permanent change has occurred, and history suggests permanent changes occur rarely.