The variability in payments from the ARC-CO program for the 2015 crop year has led to much discussion and, in some cases, criticism of the county-based revenue program. Much of the attention has focused on large variations in payment amounts for the same crops in different counties. This has been particularly notable when neighboring counties receive different payment amounts. The issue of ARC-CO payment variability was first discussed in the context of 2014 crop year payments in the farmdoc daily article from August 27, 2015. Today’s article, using 2015 ARC-CO payments for corn in Illinois as the example, looks closer at these issues in a further discussion of the ARC-CO program and revenue-based farm policy.

Many examples of 2015 ARC-CO payment variability across counties exist. The farmdoc daily article from October 18, 2016 summarized ARC-CO payments for corn, soybeans, and wheat on all counties with available data. Figure 1 illustrates the variability for 2015 crop year ARC-CO payments for Illinois counties. The payments reported in figure 1 are on a per base acre basis and account for the sequester reduction, so the payment rate has been reduced by 6.8% (sequester) and the 85% payment rate has been applied. 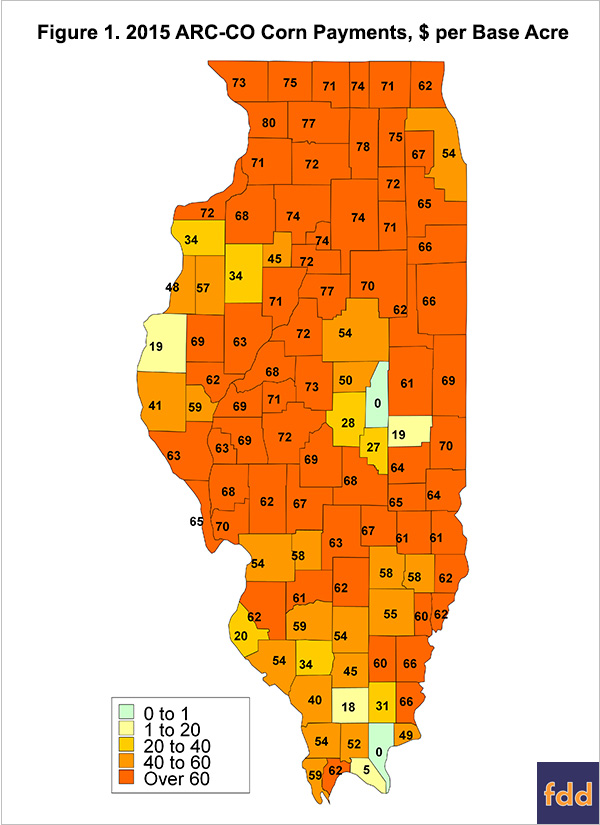 Overall, the county-level payments for corn in 2015 varied from $80 per acre in Carroll county to $0 per acre in Pope and Piatt counties. These counties are in very different regions of the state, with Carroll in the northwest, Piatt in east central and Pope in the southeast. Payment differentials are more of an issue for neighboring counties and Figure 1 also illustrates this issue. For the 2015 crop year, ARC-CO triggered a $61 per acre payment for corn in Champaign County which neighbors Piatt County where no payment was triggered. In this case, neighboring farmers can receive very different payments and some farmers with farms in both counties may receive payments for only some of their base acreage.

This is by design because ARC-CO is a revenue support program. Payments are determined by national average prices and county average yields. ARC-CO triggers payments when actual revenue (as it is defined by the program) falls below 86% of the benchmark revenue for that county. Payments will help bring revenue back up towards, but not above, 86% of benchmark revenue for the year. Therefore, high yields – where “high” is defined relative to the individual county’s benchmark yield – can offset, partially or fully, low prices and vice versa. Furthermore, since the ARC-CO program includes a payment limit equal to 10% of the benchmark revenue in the county, large revenue declines may only be partially offset by program payments.

The high yield-low price scenario is what has been experienced in both 2014 and 2015 for corn, as well as other crops such as soybeans and wheat in many counties. Actual MYA prices for these crops in 2014 and 2015 were well below the benchmark levels based on the Olympic average of the previous five years. For corn, the 2015 MYA price was $3.61 per bushel, more than 31% below the $5.29 per bushel benchmark price for corn. The revenue program, however, does not trigger assistance on price declines alone. If a county’s yield was equal to the benchmark yield, ARC-CO would trigger payments based on this price decline. However, many counties experienced average yield levels well above their 5-year Olympic moving average benchmarks yields which tended to offset the effect of the price decline on revenue. 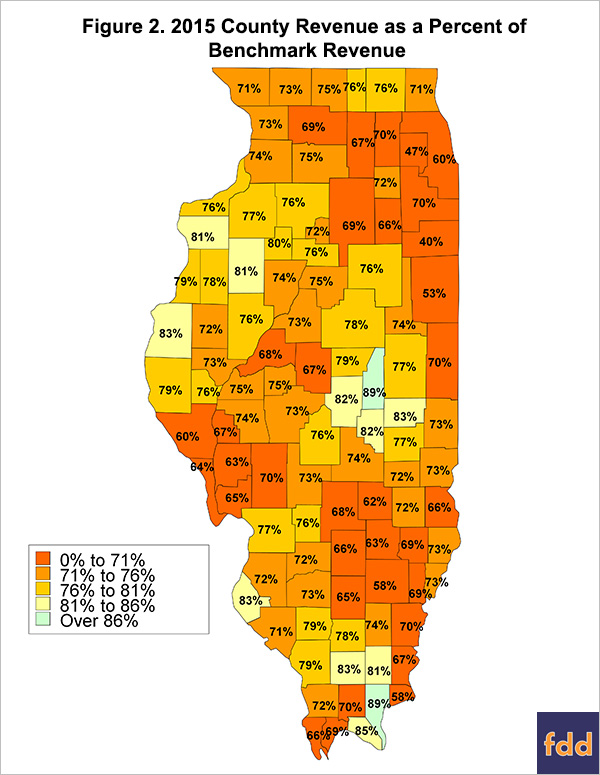 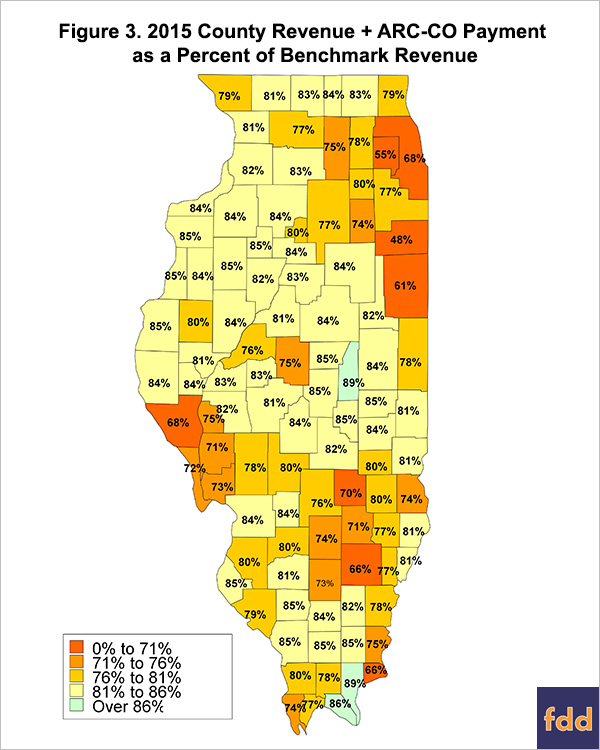 Despite some controversy over large variations in payment levels across counties, ARC-CO is working as designed by Congress in the 2014 Farm Bill. Given the revenue-based design of the program, farmers in counties with “high” average yields in a crop year are viewed as experiencing a smaller revenue loss than farmers in counties with “low” average yields. The way ARC-CO determines whether yields in a county are “high” or “low” is by comparing them to a county-specific benchmark yield. Combining the yield information with actual and benchmark price levels, ARC-CO ultimately compares actual revenue (county yield times national MYA price) to a benchmark revenue (benchmark county yield times benchmark national MYA price). Both the actual and benchmark revenue measures vary by county due to the use of county yields. Thus, payment variability across counties is a natural result since payments are triggered only when revenues in a county are sufficiently low relative to a benchmark revenue specific to that county.

This design helps manage the cost of the program by targeting assistance to the areas and farmers that have experienced more significant revenue losses. It also helps support the argument for Title I support that it is intended to be a risk management tool or safety net, providing support only when actual data indicates that losses have occurred in an area.

While the program might be working based on its design, there are always opportunities for improvements to that design. For the next Farm Bill, experience with the current design of ARC-CO will likely lead to discussions over whether the current definitions for benchmark yields, prices, and revenues are appropriate and effective in terms of measuring revenue losses and providing risk protection for farmers.

Zulauf, C., and G. Schnitkey. "Variation in ARC-CO Payment per Program Base Acre by County." farmdoc daily (5):157, Department of Agricultural and Consumer Economics, University of Illinois at Urbana-Champaign, August 27, 2015.