Understanding the timing of Agricultural Risk Coverage at the county level (ARC-CO) payments is important when making cash rent bids. ARC-CO payments related to 2017 production should be used in budgets when evaluating 2017 cash rent bids. Great uncertainty surrounds the ARC-CO payments related to the 2017 crop year. However, these payments are highly likely to be lower than payments just received in the fall of 2016 and are likely to be close to $0 per base acre if yields and prices are near current levels.

Both ARC-CO and Price Loss Coverage (PLC) farm program payments are received in the year following harvest. For example, land owners and farmers received ARC-CO payments for crops harvested in 2015 in the fall of 2016. These payments were related to 2015 production. Farm Service Agency used 2015 county yields and 2015 benchmark yields, prices, and revenues in the calculation of 2015 ARC-CO payments. 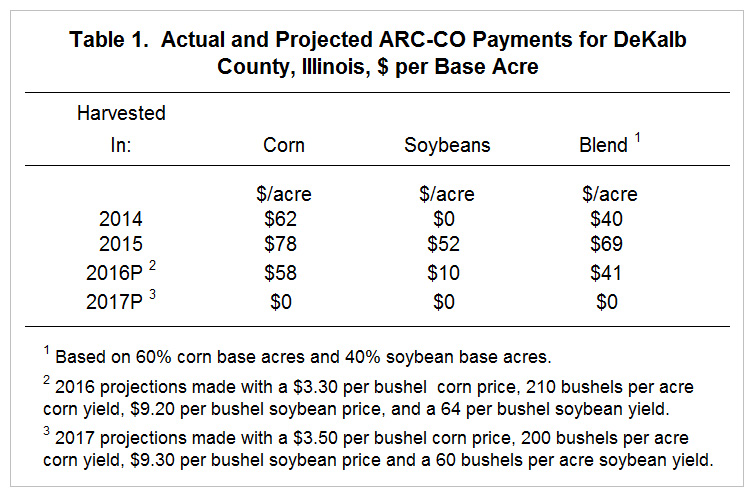 Table 1 also contains payments for a blend containing 60% base acres of corn and 40% of soybeans. For the corn and soybean crops harvested in 2015, average ARC-CO payment was $69 per base acre. This was the payment recently received in fall of 2016. The projected blended payment for the corn and soybean crops just harvested in 2016 is $41 per base acre, $28 less than the 2015 payment. If a payment is made for the crops just harvested in 2016, it will not be received until the fall of 2017. Overall, farmers and land owners should recognize that ARC-CO payments likely will decrease in future years, unless county yields and MYA prices are considerably below current expectations