Ethanol was a factor in both the price run-up that began in 2006 and the price run-down that began in 2013. Tepid growth replaced explosive growth. The question for the future is, “What is ethanol’s organic growth rate (growth without government policy stimulus)?” Recent history suggests growth will continue in the corn ethanol market, but it likely will be notably lower than the growth in yields. Thus, upward pressure on corn prices is less likely.

US Department of Agriculture data on US corn processed into US ethanol begin with the 1980 crop. It is reported monthly in the World Agricultural Supply and Demand Estimates. Corn processed into ethanol grew at an average annual rate of 6% between 1985 and 2000, exploded to a 24% annual growth rate between 2000 and 2010, then slowed to 1% per year after 2010 (see Figure 1). The explosive growth in the first decade of this Century largely coincides with the impact of government policies. These policies first led to the use of ethanol as an oxygenate additive in gasoline, then to the use of ethanol as a substitute for gasoline and by extension oil The latter was accomplished through mandates on market size enacted by Congress in 2005 and 2007. 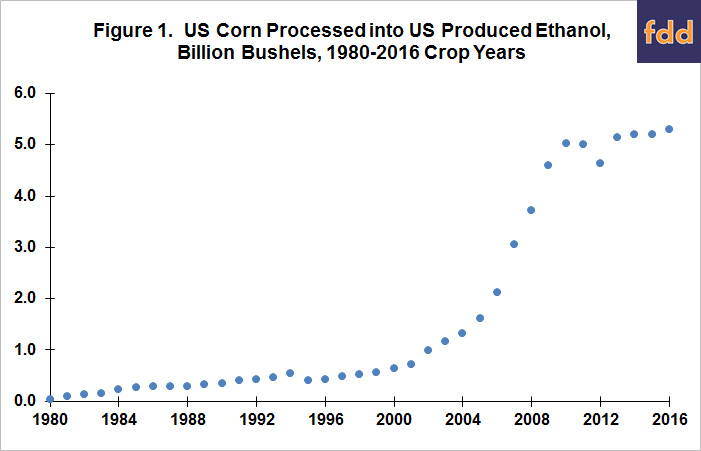 Return to Equity for Processing Corn into Ethanol

Since January 2005, Iowa State University has issued a monthly report on the costs and returns to processing corn into ethanol. The report is based on (1) a model plant created using best available information and (2) current prices for corn, ethanol, natural gas, and distillers dried grain. Among the measures calculated is a return on equity. Figure 2 reports the average of monthly returns to equity by crop year. Even though growth in the ethanol market slowed dramatically after 2010, average return on equity remained positive for the 2011-2015 crop years (13%). As expected, return on equity was higher for the 2005-2010 crop years (30%). For additional discussion of the return to processing corn into ethanol, see Irwin, 2016. 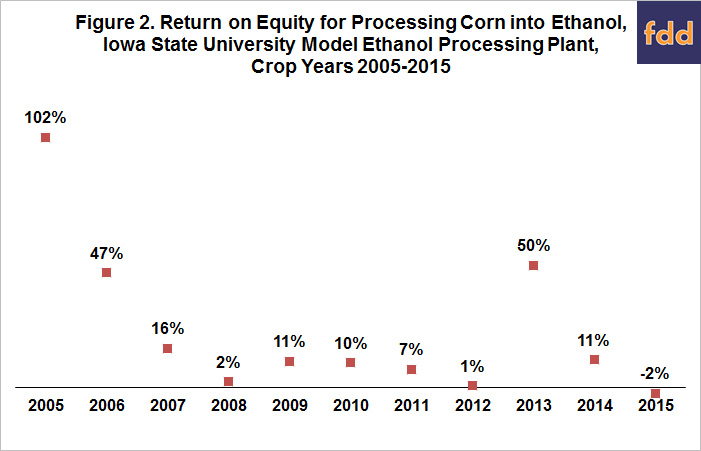 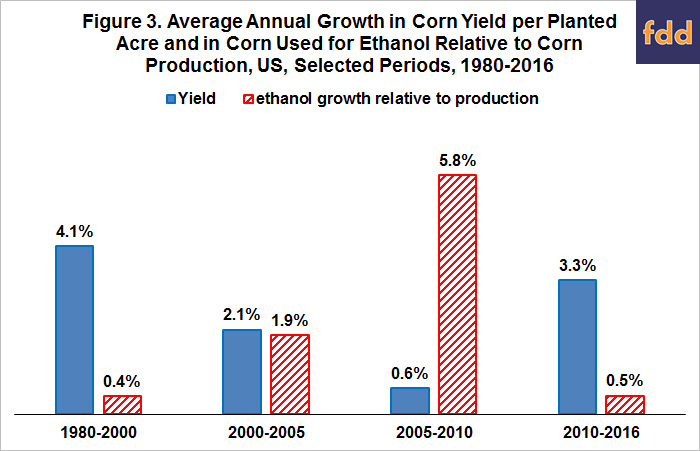 Zulauf, C. "Soybeans, China, and the Rest of the World: Changing of the Guard?" farmdoc daily (6):202, Department of Agricultural and Consumer Economics, University of Illinois at Urbana-Champaign, October 26, 2016.