In the farmdoc daily article of November 2, 2016, we started a series of articles that evaluate the history of corn and soybean yields and deviations from trend yield in Brazil and Argentina. The objective of the yield analysis is to provide a basis for forming expectations about the likely yields of the 2017 crops. Last week’s article focused on the alternative sources of historical yield estimates and the selection of the appropriate series to use in the analysis. We selected the yield estimates provided by the USDA’s Foreign Agricultural Service (FAS) as the most appropriate estimates. This week the focus is on appropriate corn yield trend estimates for Brazil and Argentina.

Figures 1 and 2 show the annual corn yields in Argentina and Brazil for the period 1961 through 2016. Yields have obviously trended higher over time, as is the case for the U.S. For the U.S., we have previously argued (most recently in the farmdoc daily article of March 2, 2016) that a linear trend is the best fit to actual average yields beginning in 1960, as shown in Figure 3. Corn yields in the U.S. have increased by an average of 1.83 bushels per year, implying that yield increases in percentage terms have declined over time as yields have increased. The linear trends in Figures 1 and 2, respectively, indicate annual average yield increases of 1.85 bushels for Argentina and 1.04 bushels for Brazil. While a linear trend statistically fits both the Argentine and Brazilian yield estimates reasonably well (R2 of 0.89 and 0.83, respectively), the fit is not as visually persuasive, particularly for Brazil, as the linear fit is for U.S. yields. There are extended periods of deviations both below and above the linear trend in both Argentina and Brazil that suggest average yields have not actually increased by a constant bushel amount per year over the entire time period. There may be an alternative form of the trend that provides a better fit to actual yields. In addition, there appears to be a structural shift in the trend in corn yields in Brazil beginning sometime in the late 1980s or early 1990s. 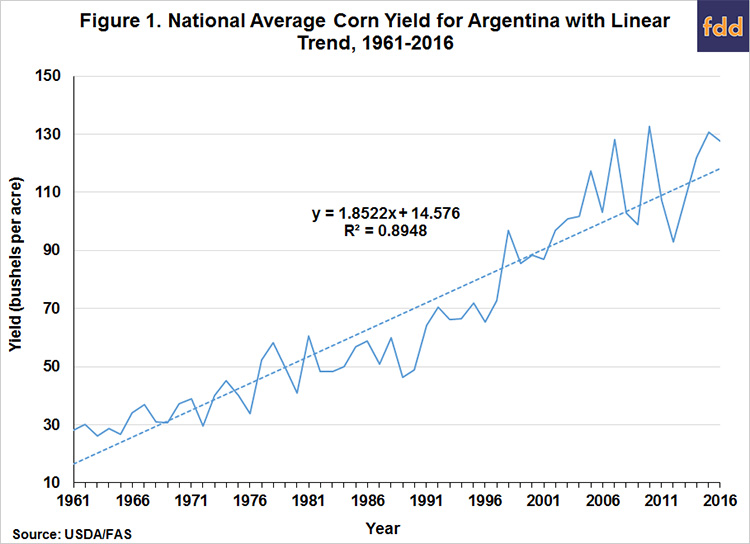 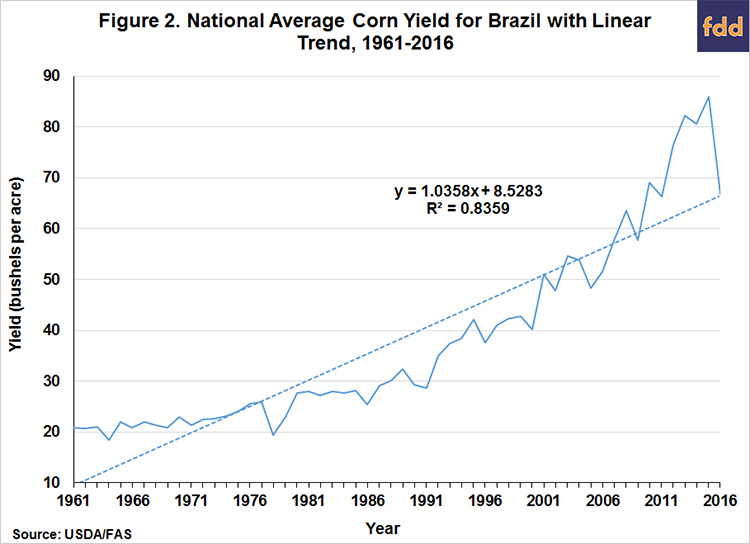 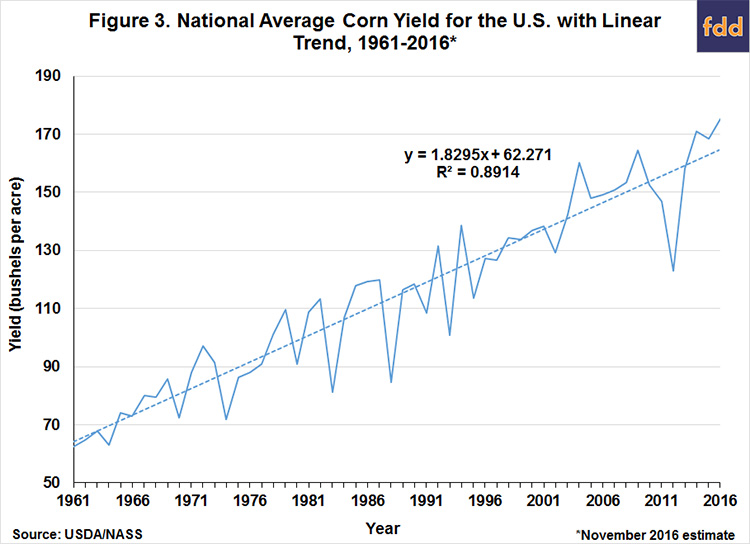 The yield history presented in Figures 1 and 2 suggest that the trend in Argentine and Brazilian corn yields is curvilinear rather than linear. That is, it appears that yields have increased at an increasing rate, in terms of bushels per acre, over time. This seems plausible if corn production technology and advance management techniques have been developed and adapted at an increasing rate over time. In addition, the rapid expansion of second crop corn production in Brazil beginning in the late 1980s may have contributed to the more rapid rate of yield increase in that country.

As an alternative to a linear trend, we fit a logarithmic trend to the corn yield data for Argentina and Brazil in Figures 4 and 5, respectively. In this model, the natural logarithm of yield is regressed on a time index. The trend (slope) coefficient for this regression estimates the constant percentage rate that yields have increased rather than a constant bushel rate over time. We also estimated the trend for Brazil for two time periods, 1961 through 1988 and 1989 through 2016, in order to reflect what appears to be a trend change in the late 1980s. That trend change may have been associated with the timing of rapid expansion of second crop corn area. No trend change is apparent in the yield data for Argentina. 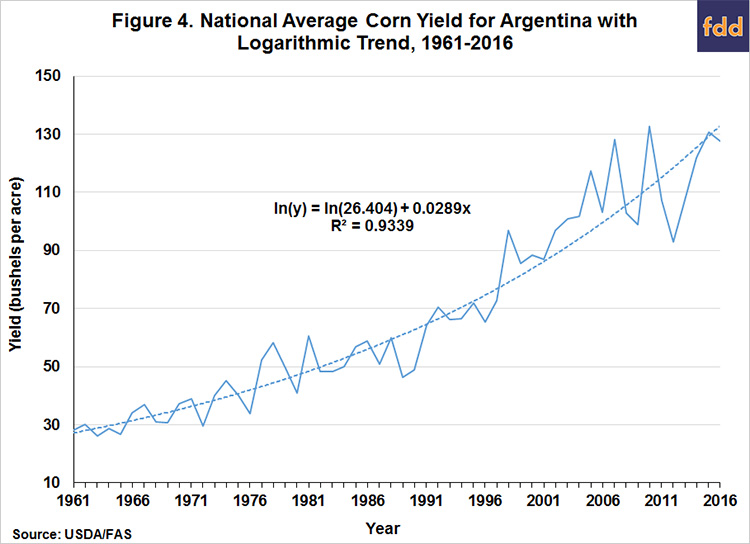 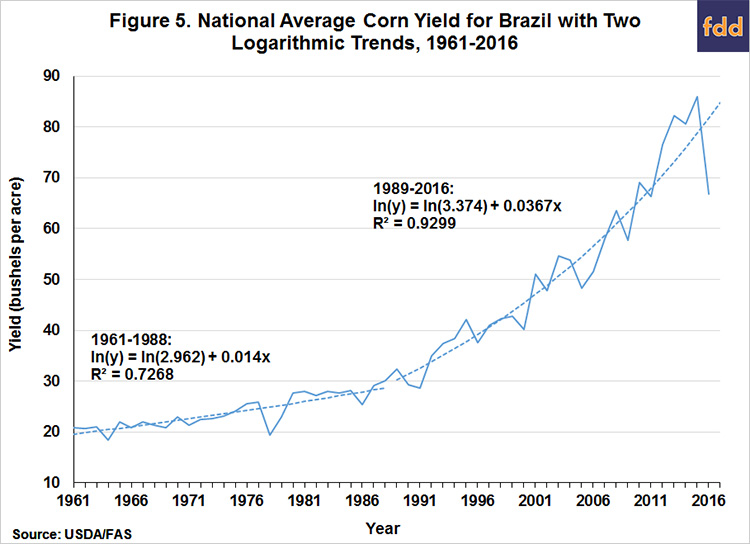 For Argentina, the logarithmic trend estimates an average 2.9 percent annual increase in yields from 1961 through 2016. The fit of the trend is quite high, with an R2 of 0.93. That is, trend explains 93 percent of the annual yield variation over the 56 year time period. Average yields in that country have been in a wide range above and below trend over the past dozen years, with some flattening of yields apparent during that period. Only time will tell, but it would not be completely surprising if the rate of increase in yields has slowed as yields have become higher and as technology becomes more fully adapted.

For Brazil, the logarithmic trend estimates an average 1.4 percent annual increase in yields from 1961 through 1988. The trend estimate increased to an average 3.7 percent per year in yields from 1989 through 2016. The fit of the trend in this later period is quite high, with an R2 of 0.93, so that trend explains 93 percent of the annual yield variation over the 56-year time period. While the average yield in 2016 was nearly 15 bushels below trend due to drought conditions in second crop corn areas, a flattening of yields in recent years is not apparent.

We can use the logarithmic regressions in Figures 4 and 5 to project trend yields for 2017. The estimated logarithmic corn yield trends point to a 2017 average corn yield of 137.1 bushels per acre in Argentina, 9.65 bushels above the 2016 average yield and 4.4 bushels above the record yield of 2010. For Brazil, the trend yield value for 2017 is 84.8 bushels per acre, 18.05 bushels above the 2016 average, but 1.23 bushels below the record yield of 2015. It should be noted that these are “unconditional” trend regression estimates that are known to result in a slight under-estimate of trend yield due to the asymmetric effect of weather on actual yields (Swanson and Nyankori, 1979; Tannura, Irwin, and Good, 2008). That is, poor weather reduces yields more than good weather improves yields so that the impact of technology (trend) is under-estimated due to sharp reductions in yield from poor weather years. (For those with a statistical bent this is more formally known as an omitted variables bias). Our previous research on U.S crop weather models that adjust for the asymmetric effect of weather on crop yields indicates the downward bias is about one-tenth of a bushel for the trend coefficients (Irwin, Good, and Tannura, 2009). Adjusting for this bias would add roughly 1-2 bushels per acre to our trend estimates. However, we do not make this adjustment, as we do for the U.S., because we have not estimated crop weather models for corn yields in Argentina and Brazil.

An examination of the average corn yields in Argentina and Brazil for the period 1961 through 2016 reveals an upward yield trend in both countries, with substantial annual variation. Unlike the U.S., the trend in corn yields in those two countries has not been linear over the past 56 years. That is yields have not increased by a constant bushel value per year, but have increased by a constant percentage value. In addition, the trend in yields appears to have increased in Brazil beginning in the late 1980s, coinciding with a rapid increase in second crop corn area. Yields in Argentina increased at an average rate of 2.9 percent while the average yield in Brazil since 1989 has increased at an average rate of 3.7 percent.

Next week, we will examine soybean yields to determine the form of the trend that best fits historical yield estimates. Future articles we will then analyze the historical deviations from trend yield as a basis for evaluating yield risk in 2017.