A critical framing element for the next farm bill debate will be the baseline for the crop programs in the commodity title (Title I). Commentary on the baseline has been appearing as early work on the next farm bill commences. Some commentary explicitly or implicitly implies a small baseline, often attributed to declining payments by the ARC-CO (Agricultural Risk Coverage – county) program if prices remain near current levels. In contrast, this article argues that, should prices remain near current levels, the crop commodity program baseline could exceed $10 billion per year. More broadly, this article presents three reasons for why the baseline for crop commodity programs is unlikely to be close to zero: (1) use of probabilistic scoring by the Congressional Budget Office (CBO), (2) ARC-CO’s yield component, and (3) the high probability farmers will be allowed to shift between programs for the 2019 and subsequent crops.

Under current Federal budget rules and procedures, funding available for the next farm bill will depend on CBO estimates in 2018, the year in which authority for most current farm bill programs expire. CBO will assume the expiring authorities continue for the next 10 years, then forecast expected spending given this assumption. This 10-year expenditure forecast is the baseline available to the House and Senate Ag Committees for programs authorized by the farm bill. Unless Congress as a whole adds new money to the baseline, which is unlikely but has happened in the past; any addition to spending, whether for new or existing programs, will need to be offset by cuts elsewhere in the baseline. This offset requirement often means that the CBO baseline has an outsized influence on the writing of a farm bill.

CBO uses probabilistic scoring, or in their terminology stochastic scoring, to forecast the baseline. Thus, for crop commodity title programs, what matters is not only the point estimates of revenue, prices, and yield (for example, $3.50 corn) over the 10 years in the baseline but also the distribution of potential values around the point estimates. It is impossible to forecast expected expenditures without knowing by year the point estimates and the exact form of the distributions of potential revenue, price, and yield. Nevertheless, it is reasonable to conclude that nontrivial spending will be forecasted for both ARC and PLC for any point estimates close to current values and any distributions similar to the ones that underlay current values. Reasons for confidence in this statement are (1) the use of fixed reference prices in the calculation formulas for both programs and (2) current price levels that are near or below the reference price for many crops.

ARC is a revenue program. It can make payments due to low yields as well as low prices. It is difficult to disentangle the size of payments due to low yields. One perspective is to look at ARC payments when crop year price is within 3% of ARC’s benchmark price for the year. Payment in this type of year is largely triggered by low yields. Barley and oats fit within this situation for the 2014 crop year. ARC-CO payments as reported by the Farm Service Agency (FSA) for the 2014 crop year were 1.9% and 0.8% of the barley and oats ARC benchmark revenue calculated using US yields. Average value is 1.4%. Assuming all base acres are in ARC and using this average value along with the sum of ARC benchmark values calculated using the reference prices and US yields for barley, corn, oats, peanuts, rice (by type), sorghum, soybeans, and wheat implies ARC payments of $1.4 billion per year. This calculation suggests that, even if ARC is the only program, the baseline will be at least $10 billion over 10 years, assuming ARC yield related payments for barley and oats are similar to those for the other crops and prices equal the reference prices.

An important feature of the 2014 farm bill is that farmers were given a choice between ARC and PLC. However, the decision applies only through the 2018 crop. History suggests farmers will be allowed to make a new choice for the 2019 crop, either in a new farm bill extending over several crop years or in a temporary 2014 farm bill extension, as happened when the 2008 farm bill was extended through the 2013 crop. History also suggests farmers will choose the program expected to pay the most at the time of the decision. Should prices remain near current levels, the choice is likely to be PLC for a number of reasons. ARC’s reference revenue is moving lower as the high price years of 2009-2013 move out of its 5-year Olympic average calculation window. PLC’s coverage starts at 100% of the reference price while ARC’s coverage starts at 86% of its reference revenue, which in a low price environment will depend on the reference price. The cap on per acre payment by PLC, which is set by the difference between the reference price and marketing loan rate, is much larger than the 10% cap on per acre payment by ARC.

Because PLC payments depend upon a reference price fixed by Congress for the length of the 2014 farm bill, annual payments by PLC will not change if current prices continue into the future. Hence, one perspective on the baseline should current price levels continue is to estimate PLC payments for the current 2016 crop. The estimate is made using price estimates for the 2016 crop year currently posted on FSA’s website, the smaller of updated base yield for participants in ARC or PLC as reported on the FSA website, and assuming all base acres are in PLC. The payments are adjusted for the 85% base acre payment factor and a sequester amount of 6.8%. Estimated payments for barley, corn, oats, peanuts, rice (by type), sorghum, soybeans, and wheat total $10.45 billion for the 2016 crop year (see Figure 1). Corn and wheat account for 83% of projected payments. These payments are expected to continue if prices remain at current projected levels for the 2016 crop and if the mechanics of the PLC program, including its fixed reference prices, do not change. 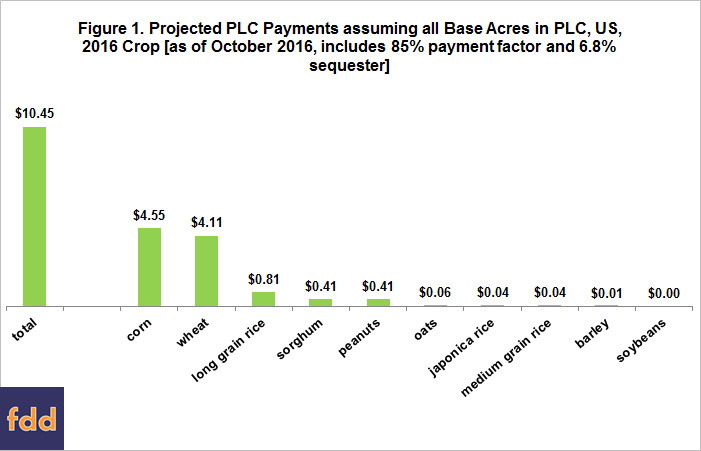