Cash rent as a percent of farmland price sometimes is used as a benchmark for determining the appropriateness of a cash rent level. Over time, cash rents as percentages of land prices have declined, with declines corresponding to decreases in returns of interest bearing financial assets. Until interest rates increase, cash as a percent of land price likely will remain at historically low levels.

An approach sometimes used in evaluating the appropriateness of a cash rent begins with two pieces of data: 1) land price and a 2) desired percent return. The desired return is the current, cash return desired from farmland and does not include capital gains (losses) due to increases (decreases) in farmland prices. A $9,000 per acre farmland price and a 3.0% desired return gives a benchmark cash rent of $270 per acre ($9,000 land price x .03 return).

This downward trend corresponds to decreases in yields on interest bearing financial assets. For example, yields on the ten-year constant maturity Treasury note fell during the same period. Ten-year notes averaged a 10.62% yield in 1985, falling to 2.14% in 2015.

Yields on ten-year Treasury notes provide an indication of returns of competing investments to farmland. Moreover, ten-year yields provide an indicator of changes in interest rates on farm mortgages. Between 1985 and 2015, the correlation coefficient between cash rents as percentages of land values and ten-year yields is .93. When returns on interest-bearing assets are low, cash rent as a percent of land price should be expected to be low as well.

Interest rates have been on a declining trend from 1985 to the present, with rates being particularly low since the 2008 financial crisis. Since 2008, U.S. Federal Reserve Bank (FED) actions have been designed to encourage low interest rates.

Now a question exists on how long “low” interest rates will persist. The FED has stopped increasing its aggregate holdings of bonds and seems poised to increase rates the Federal funds rates. The aggressiveness of FED actions remains to be seen.

Even if FED begins increasing short-term rates, there are reasons to believe longer-termed rates will remain relative low into the foreseeable future. Growth is occurring in the U.S. economy, with real Gross Domestic Product (GDP) increasing by 2.9% in the third quarter of 2016. While the U.S. economy has been growing for the past several years, growth rates have not reached levels that occurred during the 1960s through 1980s. Moreover, much of the growth currently taking place does not appear to require much capital. Low demand for capital then leads to low interest rates. Furthermore, interest rates are higher in the U.S. than in many countries. For example, Germany and Japan currently have negative yields on some sovereign debt issues. 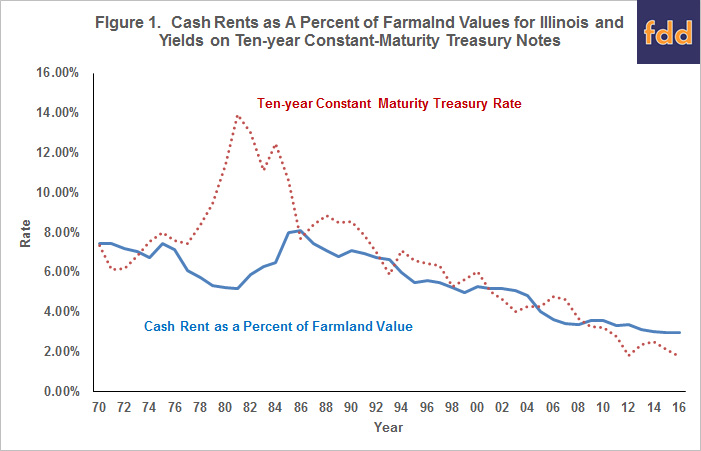