After lying largely dormant for the last few years, US trade policy is now back in the spotlight. In particular, concerns have been raised about our trade relations with Mexico and China, who together are the market for almost one-third of total U.S. agricultural exports. Given this recent scrutiny, I thought it would be useful to review the current state of trade in US agriculture.

For all the talk about the US trade deficit, agriculture is one industry where the US has a trade surplus – in FY2016, we exported $129.7 billion while importing $113.1 billion of agricultural goods. And despite a global slowdown in overall trade, US agricultural exports are increasing. In this coming year, this growth is expected to be led by increases in wheat and corn exports and an increase in raw soybean exports.

Potential trade disputes with China and Mexico are of particular concern in agriculture, given that they involve or largest (China) and third largest (Mexico) export markets. Canada comes in as a close second. These are also the markets where we’ve seen the most growth: the largest expansion in exports over the past 25 years have been to China, followed by North America. And this growth is expected to continue. Our exports to both China and Mexico are predicted to increase in FY 2017, with exports to China expected grow to $21.8 billion from $21.5 billion and exports to Mexico expected to increase to $18.3 from $18 billion.

As anyone in the Midwest knows, a large fraction of US agricultural exports come in the form of oilseeds and feed grains. Almost half of the U.S. soybean crop is exported. China is by far our largest importer, buying 1,085 million bushels of a total 1,940 million bushel of exports in 2014/15, making up an estimated value of $21.2 billion estimated for 2017. Soybean export volumes are setting records, mitigating against the expected declines in soybean meal, soybean oil and other oilseed products for a total expected export value of $31.0 billion.

The United States is the world’s largest corn exporter, accounting for 40% of all international corn trade. That said, exports are still less than one fifth of US production, at $9.154 billion for FY2016. Japan is the world’s largest corn importer, using our exports to feed its substantial livestock industry. US corn exports are expected to increase slightly this year, particularly to Japan and South Korea.

Along with corn and soybeans, one of the largest changes over the last 20 years has been the large increase in US consumer-oriented agricultural exports (see figure 1). These products include dairy products, meats, poultry, live animals, oilseed meals, vegetable oils, fruits, vegetables, and beverages. US horticultural exports now make up the largest export category at $33 billion. Livestock exports closely follow oilseeds for a total $25.6 billion. This year we’re expected to see a notable increase in dairy products, particularly to developed countries. 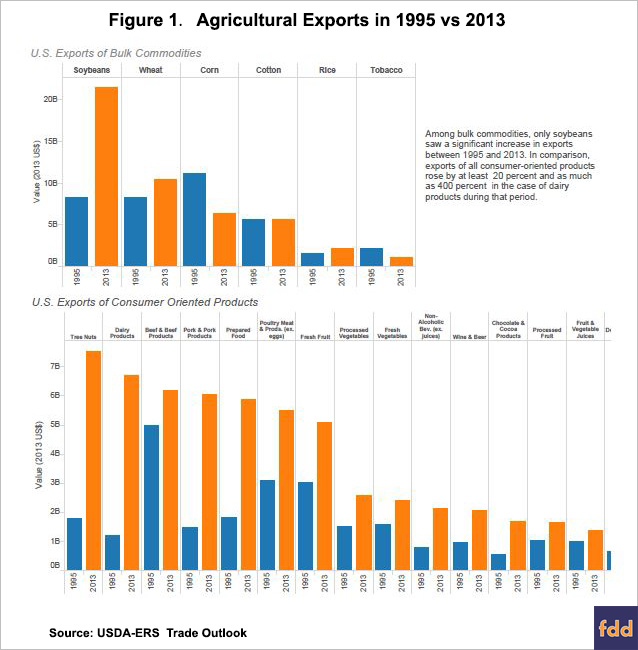 This overall increase in agricultural trade has been facilitated by trade agreements. As illustrated in figure 2, the USDA ERS estimates massive growth in agricultural trade under NAFTA, growing from $16.7 billion in 1993 to $82 billion in 2013. Taking inflation into account, this increase amounts to a growth of 233 percent over those 20 years (Zahnister et al 2015). The same report estimates that NAFTA had a small, but positive effect on US agricultural employment. 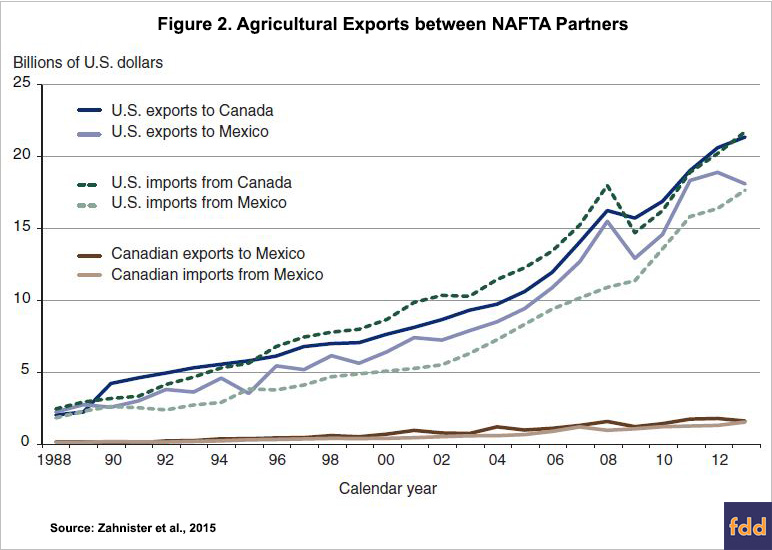 Over and above the effect of increased trade, NAFTA has led to the regional integration of agricultural production, facilitated by regulatory harmonization as much as by lower tariffs. For example, the livestock market has become dramatically more integrated across all three NAFTA countries, where livestock trade had previously been hampered by non-tariff measures (Ghazalian et al 2011). Poultry and hog industries have rapidly grown in Mexico since the mid-1990s and are increasingly relying on imports of feed (Zahnister et al 2015).

These increases in trade and market integration come with a cost, and farmers in some regions have gone out of business or had to dramatically change their production in response to these new trade forces. That said, much of those production shifts have already occurred, and any dramatic changes to trade agreements would impose new adjustment costs on the industry and its participants.

Despite being a large country with a substantial domestic market for agricultural production, much of US agriculture has traditionally relied on international markets. In this coming year, US export may be hampered by the high US dollar combined with slow global economic growth. Despite these headwinds, US agricultural exports are expected to be a bright spot.