We recently began a series of articles to evaluate the history of corn and soybean yields and deviations from trend yield in Brazil and Argentina. The objective of the yield analysis is to provide a basis for forming expectations about the likely yields of the 2017 crops. The first three articles focused on the alternative sources of historical yield estimates, the selection of the appropriate series to use in the analysis for both corn and soybeans, and the selection of the best-fitting trend model for each commodity and country (farmdoc daily, November 2, 2016; November 9, 2016; November 16, 2016). Yesterday’s article focused on first and second crop corn yield trend estimates and trend deviations in Brazil (farmdoc daily, December 14, 2016). Today’s article examines corn yield trend estimates and trend deviations in Argentina. Over the last decade, Argentina is the third largest exporter of corn in most marketing years.

As previously discussed in the farmdoc daily article of November 9, 2016, we chose a logarithmic trend to fit the corn yield data for Argentina over the 1961-2016 period. The yield estimates are provided by the USDA’s Foreign Agricultural Service (FAS) and are based on past trends, expert opinion, industry intelligence, and estimates from the Argentina Ministry of Agribusiness. We use average corn yield estimates, not adjusted for varying weather conditions from year-to-year, for the period 1961 through 2016 to determine the form of the trend that best fits those yield estimates and to calculate the trend yield for 2017. We did not find evidence for a trend shift during this sample period as we did for Brazil. It also should be noted that using yields that are not adjusted for varying weather conditions actually results in a slight under-estimate of trend yield due to the asymmetric effect of weather on actual yields (Swanson and Nyankori, 1979; Tannura, Irwin, and Good, 2008). That is, poor weather reduces yields more than good weather improves yields so that the impact of technology (trend) is under-estimated due to sharp reductions in yield from poor weather years. Our previous research on U.S crop weather models that adjust for the asymmetric effect of weather on crop yields indicates the downward bias is about one-tenth of a bushel for the trend coefficients (Irwin, Good, and Tannura, 2009).

Figure 1 shows corn yield trends in Argentina with the logarithmic trend. A logarithmic trend implies that yields have increased at a constant percentage rate rather than a constant bushel rate over time. For Argentina, the logarithmic trend estimates an average 2.9 percent annual increase in yields from 1961 through 2016. The fit of the trend is quite high, with an R2 of 0.93. That is, trend explains 93 percent of the annual yield variation over the 56-year period. Average yields in that country have been in a wide range above and below trend over the past ten years, after a sustained period of above average yields beginning in 1997 and running through 2007. The last ten years do provide an indication of a flattening yield trend during this volatile period. Only time will tell, but it would not be completely surprising if the rate of increase in yields has slowed as yields have become higher and as advanced technology becomes more fully adopted. 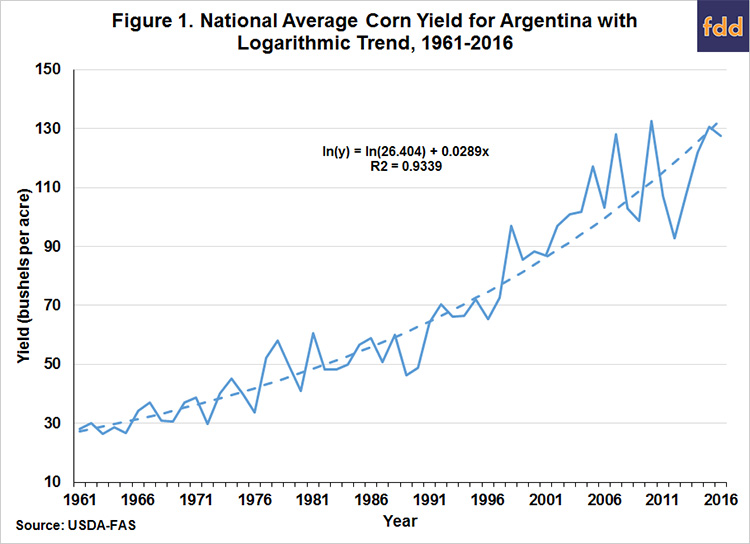 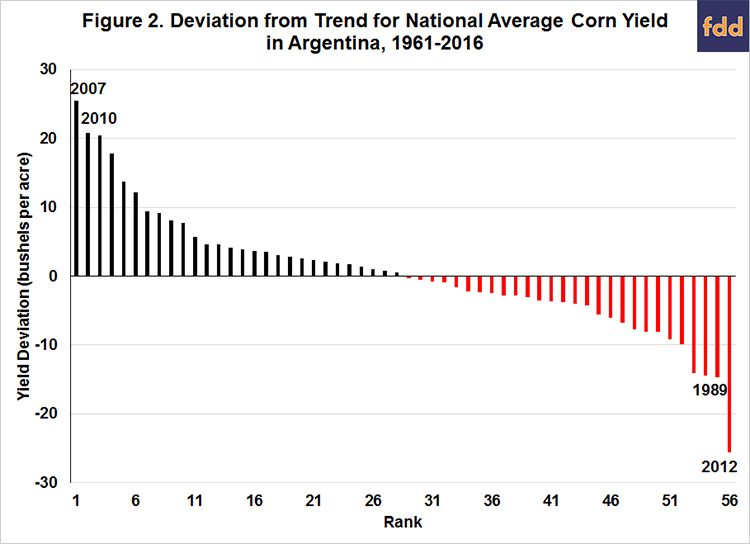 An examination of the national average corn yields in Argentina for the period 1961 through 2016 reveals an upward yield trend with substantial annual variation. Yields have not increased by a constant bushel value per year, but have increased by a constant percentage value. The estimated logarithmic corn yield trends point to a 2017 average corn yield of 137.1 bushels per acre, 9.65 bushels above the 2016 average yield and 4.4 bushels above the record yield of 2010. Based on the projections of harvested acreage in the USDA’s December 9 World Agricultural Production report, yields at trend value would result in 2017 Argentine corn production of 1.525 billion bushels, 460 million bushels (43 percent) larger than the estimate for the 2016 crop. This projection is contingent on Argentine corn yields continuing on the logarithmic trend despite the noticeable flattening of corn yields in this recent volatile period. Current World Agricultural Production report projections calculate a 25.9 percent increase in Argentine corn production for 2017.