This year, downside price risk on soybeans is a larger concern than usual. For those farmers who are particularly concerned about downside price risk, Area Risk Protection (ARP) at the 90% coverage level may be a good alternative. For most farmers, this would result in a shift from Revenue Protection (RP) to ARP. Using ARP allows moving to a higher coverage level than RP. However, ARP uses county yields in its indemnification process rather than farm yields.

For soybeans, most farmers are purchasing Revenue Protection (RP) at relatively high coverage levels. To Illustrate, Figure 1 shows 2016 crop insurance use for Warren County, Illinois. Warren County is in west central Illinois and is a high producing county. As can be seen in Figure 1, RP was used on 86.4% of the insured acres in 2016, with 11.0% insured at the 75% coverage level, 32.5% at the 80% coverage level, and 36.8% at the 85% coverage level. Figure 1 can be produced for other counties and crops in the “Product Use” section of the 2017 Crop Insurance Decision Tool. Doing so for other counties in northern and central Illinois will show similar usage to Warren County. 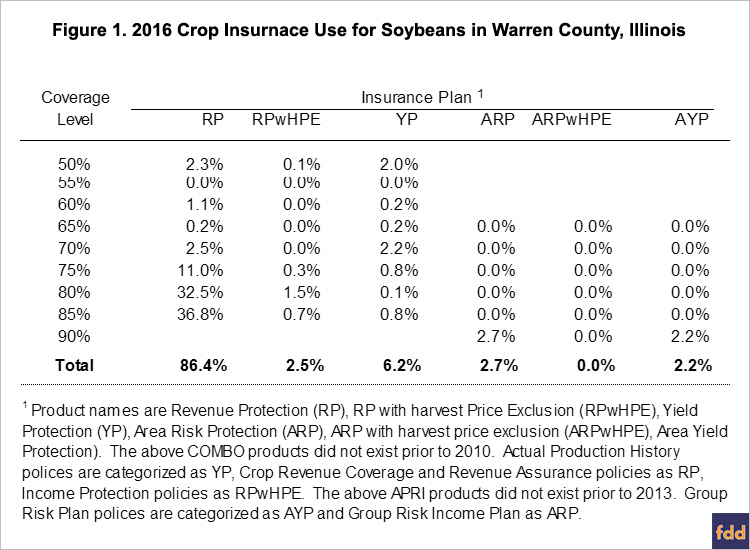 Few payments have been received on RP policies in the past ten years, as can be seen in the “Product Performance” section of the 2017 Crop Insurance Decision Tool, which presents historical loss data from the Risk Management Agency (RMA). From 2005 to 2015, the loss ratio on RP policies for soybeans in Warren County averaged .18. A loss ratio equals insurance payments divided by total premium. The .18 value over the 2005-2015 period means that payments equaled .18 of the total premium. Loss ratios did not vary much with coverage level: .17 for RP 75%, .16 for RP at the 80% coverage level, and .27 for RP at the 85% coverage level. These are relatively low loss ratios indicating that farmers have received few crop insurance payments from soybean policies since 2005.

ARP is the county alternative to RP. Rather than using farm yields, ARP uses county yields in its calculations of guarantees and payments. ARP’s highest coverage level is 90% compared to 85% for RP. Use of a 90% coverage level offers the ability to increase the guarantee, thereby obtaining additional protection against low prices. Obtaining additional protection seems prudent in 2017 as risks of downward movements in soybeans seem more of a concern than in a typical year (see farmdoc daily, January 23, 2017). 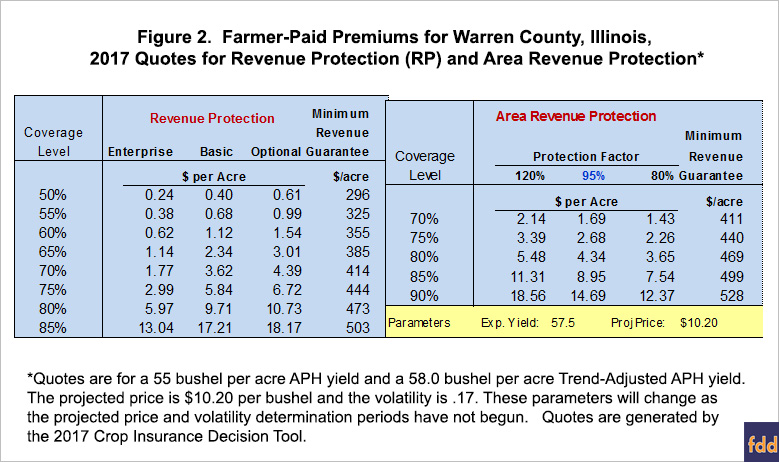 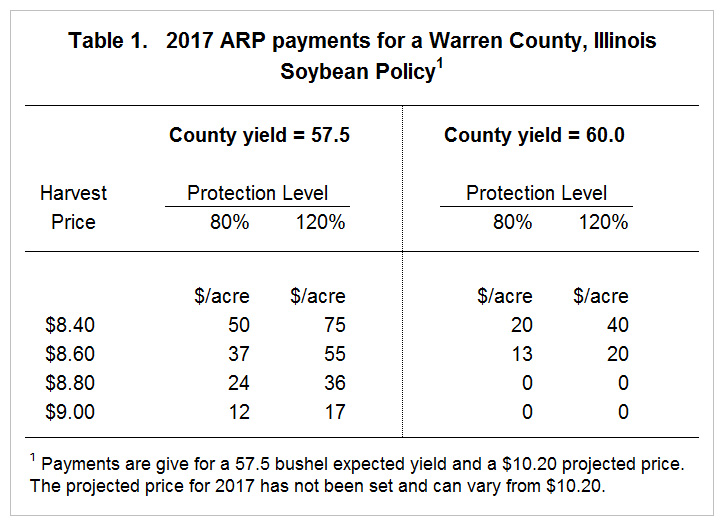 Other factors to consider if switching to ARP include:

Hubbs, T. "Weekly Outlook: Is it Time to Sell Some 2017 Soybeans?" farmdoc daily (7):11, Department of Agricultural and Consumer Economics, University of Illinois at Urbana-Champaign, January 23, 2017.