From the 2017 Crop Insurance Decision Tool, users will select “product performance” from the menu and make the following selections (see Figure 1):

Figure 1 shows a Logan County, Illinois example where corn is selected. RP performance will be given for all coverage levels, meaning that data over the 50% to 85% coverage levels are averaged and reported.

Figure 2 shows output from selections in Figure 1. All data comes from Summary of Business, which is maintained by the Risk Management Agency (RMA). The 2017 Crop Insurance Decision Tool provides results from 1995 to 2015. Yearly performance rows will be blank if no use of the chosen product occurred during the year. 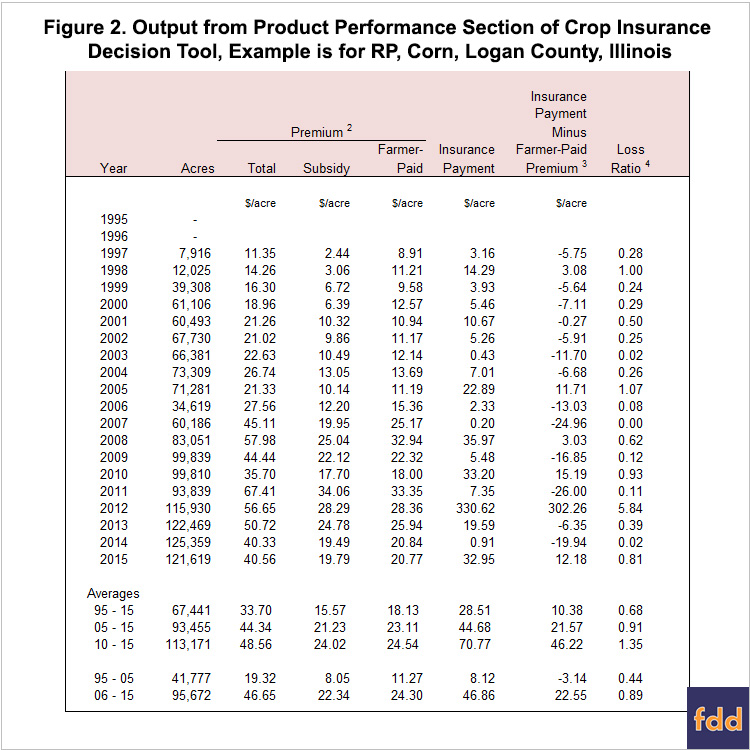 RP along with YP and RPwHPE came into existence in 2011. As a result, RP performance is reported from 2011 onward. Before 2011, Crop Revenue Coverage (CRC) and Revenue Assurance (RA) plans where in use. RP, CRC, and RA all are revenue insurances that allow guarantees to increase if harvest price is higher than projected price (RA had an option that excluded the guarantee increase, but this option was used rarely). Therefore, CRC and RA performance are reported for years prior to 2011.

The “product performance” section first reports acres insured using the selected combination. RP type products were first introduced in 1997 and 7,916 acres were insured in Logan County (see Figure 2). Use grew to 125,359 acres in 2014, decreasing slightly to 121,619 acres in 2015. RP is now the most used crop insurance product, having over 90% use in many counties (see farmdoc daily, January 4, 2017).

Past performance will not be entirely reflective of how the products will perform in the future. RMA makes adjustments to premiums over time. For example, continuing high payments on products will result in increasing premiums and vice versa. Moreover, RMA continually conducts studies of its rating procedures, which can cause premium changes. As a result, current premiums will vary from historical premiums even given identical conditions. As a result, future performance will not match historical performance.

Moreover, values are averages across many farms in a county. In 2015, average RP premium in Logan County were $20.77 per acre. Some farmers paid higher premiums depending on crop insurance choices and historical yields, and vice versa. The average RP payment in 2015 was $32.95 per acre. Again, payments vary across farms in the county. Some farmers did not receive payments in 2015 while other farms received payments much larger than $32.95 per acre.

Importance of 2012 in Illinois

The drought has similar impacts on many Illinois counties. To illustrate, Panel A of Figure 3 shows average RP loss ratios for corn in each Illinois county for 2006 to 2015. The 2012 drought particularly impacted farms in southern and eastern Illinois, causing many counties to have loss ratios above 1.0. Panel B shows loss ratios for 2006-2015 with 2012 excluded. Without 2012, most counties had loss ratios well below 1.0. 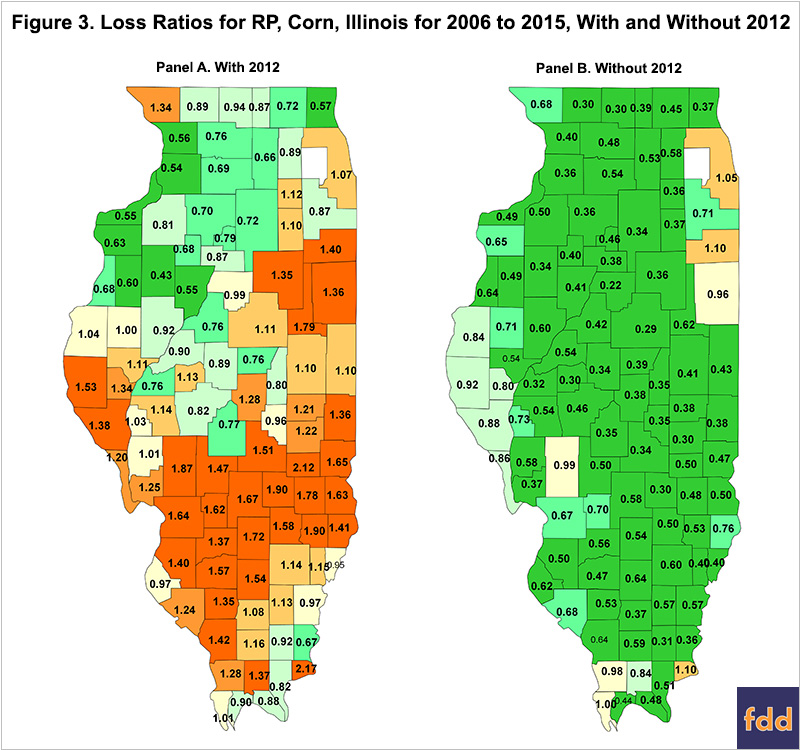 These comparisons point out the importance of “extreme” years on overall crop insurance performance. Severe droughts like 2012 occur in the Midwest occasionally, with much debate concerning their frequency of droughts. The last drought of comparable magnitude to 2012 happened in 1988, 25 years previous to 2012, suggesting infrequent droughts. However, two additional, large yield shortfalls occurred in the 1980s: 1980 and 1983. Three severe events in a decade give a very different perspective on the frequency of droughts than the more recent history of the passing of 25 years. Which represents the future the best is an open question, with a blend of the 1980s experience and the recent more moderate losses likely to be the most appropriate answer.

Schnitkey, G. "Revenue Protection (RP) Use on Corn in the Midwest." farmdoc daily (7):2, Department of Agricultural and Consumer Economics, University of Illinois at Urbana-Champaign, January 4, 2017.