This is a presentation summary from the 2016 Illinois Farm Economics Summit (IFES) which occurred December 12-16, 2016. A complete collection of presentations including PowerPoint Slides (PPT) and printable summaries (PDF) are available here.

Corn and other grain prices have declined sharply since 2013 and have recently been as low as $3 per bushel on a monthly average basis for the state of Illinois. The low level of prices has prompted some observers to declare that the “new era” in grain prices that began late in 2006 has come to an end. Whether the new era is indeed over depends on the mix of factors that have driven prices so low. If these factors are unlikely to be reversed, then there is little chance for a major price recovery. If at least some of these factors can be reversed then there is a possibility of price recovery within the new era price range shown below. The answer has obvious and important implications for farm incomes, land prices, crop input prices, land rental rates, and marketing strategies. The answer will also have important policy implications for U.S. agriculture.

The first major factor on the demand side is economic growth. The average rate of global economic growth was 4.25 percent over 2000-2008 compared with 3.25 percent over 2009-2016, a drop of 30 percent in the growth rate. Whether the world can return to the higher growth rates is certainly an open question, but it is at least plausible and would do much to help corn prices recover. The second major factor on the demand side is ethanol. Our original argument was that the new era was primarily driven by the rise of ethanol production. There has been a plateauing in U.S. corn use for ethanol production since 2010, but the plateau is at a very high level, above 5 billion bushels. Nonetheless, there is little prospect of ethanol driving a major recovery in corn prices.

Turning to the supply side, the boom in corn prices led to almost a 25 percent increase in corn acreage around the world. History shows that reversing this acreage response will be a very slow process. But, total corn acreage has been flat since 2013. Yield is, of course, the other major factor in determining supply, and weather around the globe has generally been favorable since 2013. In fact, the global average corn yield exceeded 85 bushels per acre in each year over 2013-2016. The previous high yield on a global basis was 83 bushels. So, good yields have certainly contributed to the current surplus in the corn market and low prices.

The influence of the recent run of good weather on corn yields may be under-appreciated. One way of looking at this question is to ask what would have happened in the last four years if global corn yields had been at trend values instead of the high averages actually observed. On net, the above-trend yields since 2013 have added about 1.7 billion bushels to world corn ending stocks, or about one-third of the average level of ending stocks over 2000-2012.

So, what are the odds that the current run of good weather will end in the near future and lift corn prices? Long-term data on U.S. corn yields provides a useful perspective on this particular question. The above chart shows the percentage deviations from U.S. corn trend yields over 1895-2016, and these deviations can be considered the net impact of weather on yields. This data suggests the last 20 years have been among the best runs of favorable weather in the modern history of U.S. corn production. For all practical purposes, the U.S. has only had one truly bad corn crop (2012) in the last 20 years. There have been other years of below-trend yields but these have been relatively modest from a long-term perspective. 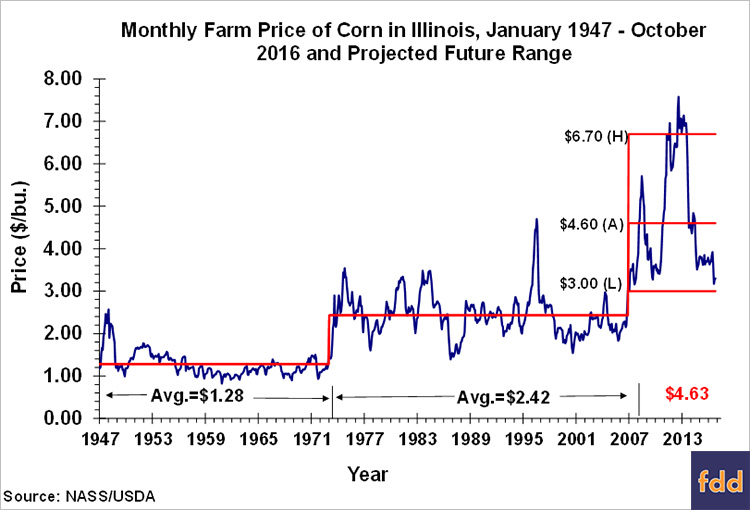 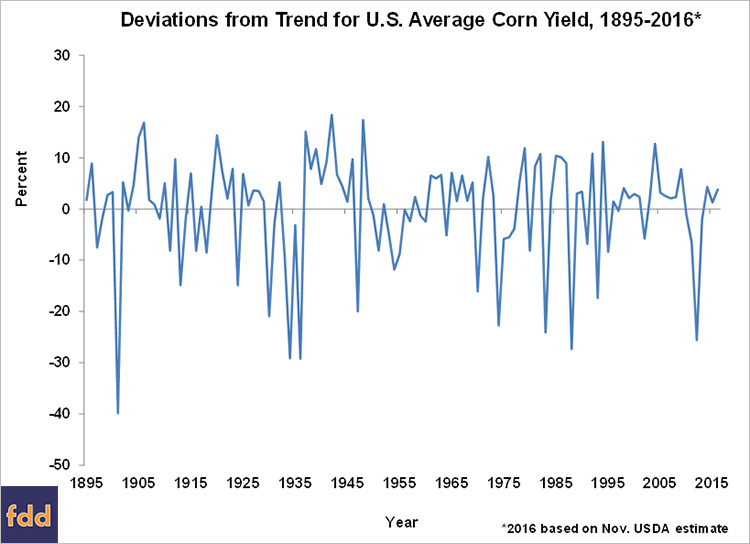 The slides for this presentation can be found at: