The term “sweat equity” is used frequently in discussions of the contributions of an off-farm heir to the value of the family owned business. Sweat equity arises in part when an on-farm heir is paid less than their true opportunity cost to work for the business. The term also arises in situations where the business has grown substantially in value due to the managerial ability and efforts of the on-farm heir. This article describes why sweat equity is commonly used on farms that include multiple generations, and discusses how to measure sweat equity.

Why Does Sweat Equity Occur?

As noted above, sweat equity may arise when an on-farm heir is paid less than their true opportunity cost to work for the business and/or the business has grown substantially due to the abilities and efforts of the on-farm heir. Let us look at these two items one at a time. Suppose a returning family member has the opportunity to work for a local retailer that with benefits would pay them $75,000 per year. The farm is currently not able to match this offer. Instead of a $75,000 salary with benefits, the farm is willing to pay the returning family member a salary and benefit package of $50,000 per year. Benefits are widely defined here and may include; but are not necessarily limited to; insurance, housing, and vehicle use. In this instance, sweat equity can be computed by examining the difference between the agribusiness and farm opportunities.

How Can We Measure Sweat Equity?

Let’s use an example to illustrate a few key points. The example outlined below was modified using an illustration made by David Goeller from the Department of Agricultural Economics at the University of Nebraska-Lincoln.

In this example, Mom and Dad want to keep the farm in the family. The youngest of three children, Michael, came back to the farm in 1990. Unfortunately, if the farm business was divided into three equal pieces, it would not be of an adequate size to create a viable farm business for Dad, Mom, and Michael. When Michael came back to the family farm in 1990, the fair market value of the business (i.e., owner’s equity) was $420,000. At that time, Mom and Dad agreed that the contribution of each child up to 1990 was equal. Dividing the $420,000 by three results in a contribution of each child of $140,000. Today’s fair market value of the business is $1,680,000. If we divide by three, $560,000 would be left to each child. However, the contributions of the three children have not been equal since 1990. There were very few promises made to Michael when he returned to the farm. However, decisions were made because he came back (e.g., land was rented and purchased). Mom, Dad, and Michael know that his contribution to the family farm has resulted in Michael developing a sizable investment in “sweat equity” in the farm business.

There are two potential dilemmas present in the example outlined above: treating each child fairly and farm equity has increased dramatically. With regard to the first dilemma, Mom and Dad do not want the non-farm heirs to feel that they have been mistreated or slighted. A couple of questions come to mind. If you were divide the farm business into three equal pieces, would each slice by large enough to create a viable business? What about the contribution of the on-fam heir to the growth or success of the business? With regard to the second dilemma, Michael has likely not earned enough since 1990 to pay for the increased value of the land and other assets. For Michael to be successful, both the income the business generates and the market value of the farm assets has to be considered.

Let’s examine one possible resolution of the two dilemmas noted above. After careful consideration, Mom and Dad decided that they would equally divide the 1990 value of the farm business between the three children. They also decided that Michael was responsible for 50 percent of the farm growth since 1990 (value of business grew from $420,000 to $1,680,000 or $1,260,000). Table 1 outlines the resulting equity distribution in the estate plan. At this point, Mom and Dad want to establish procedures for how the equity would be split. The amounts presented will likely be changed to reflect future changes to the farm’s equity position. A couple caveats should be noted. First, it is often difficult to determine how much “sweat equity” contributed to the increase in the value of the business. Second, the level of Michael’s annual compensation is an important consideration when valuing “sweat equity”. If Michael was paid something close to his opportunity cost when he returned to the farm, the computations in table 1 would likely be different. 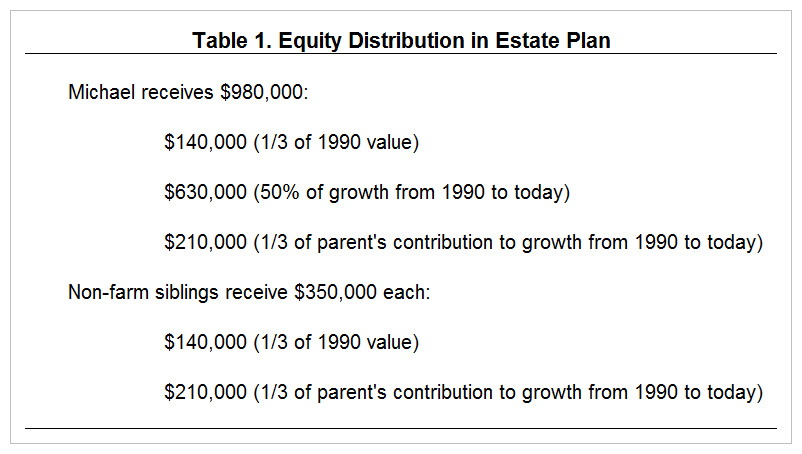 What is missing from the example above? The answer could be quite a bit. For example, should the compensation for the three family members presented in table 1 be changed if one of the family members has had a big hand in taking care of Mom and/or Dad? Usually, but not necessarily, these services are provided by the on-farm heir. It is also important to note that Mom and Dad may be able to stay on the farm longer because one of the family members is close by. For some parents, this is extremely valuable. As another example, what if Mom and Dad made it more feasible for Michael’s spouse to work off the farm? Should this fact be accounted for? Obviously, valuing sweat equity and determining an equity distribution plan can be complicated. Notice that I did not say impossible. Having an outline of a plan is preferable to no plan.