This is a presentation summary from the 2016 Illinois Farm Economics Summit (IFES) which occurred December 12-16, 2016. A complete collection of presentations including PowerPoint Slides (PPT) and printable summaries (PDF) are available here.

Incomes likely will be up in 2016. However, the increase is from a very low 2015 farm income. Net income on Illinois grain farms enrolled in Illinois Farm Business Farm Management (FBFM) was at $500 per farm in 2015. This was the lowest level since 1990.

Net income in 2016 will be higher for three reasons. First, corn yields are projected to be above average. In 2016, the U.S. Department of Agriculture (USDA) is projecting an Illinois state corn yield at 202 bushels per acre, a record high that is 2 bushels above the previous 200 bushels per acre record set in 2014.

Second, soybeans are going to be profitable. USDA is projecting a record state soybean yield in 2016 of 62 bushels per acre, 6 bushels higher than the previous record set last year. Soybean prices have not fallen as much as corn prices have. In 2016, soybeans prices that average in the mid to high $9.00 range can be expected. This leads to soybeans being more profitable than corn in 2016.

Third, Agricultural Risk Coverage at the county level (ARC-CO) payments are projected for the 2016 crop in some counties. At most, these payments will be half the size of payments for the 2015 crop.

At this point, reasonable expectations of 2017 prices are $3.60 per bushel for corn and $8.75 per bushel for soybeans. For the 2017 crop, ARC-CO payments should not be expected. These prices, and no ARC-CO payments, lead to very low 2017 income projections. Projected incomes using trend yields would be below those actual 2015 net incomes.

Profitability is the Problem

The major issue facing Illinois farmers is a profitability problem particularly, on corn production. Revenue from corn production does not exceed the sum of non-land costs and average cash rents. As long as this situation exists, there will be a problem with generating sufficiently large cash flows to cover all the debt repayment needs and other cash obligations.

Fortunately, most Illinois grain farms are in good to strong financial position. There is equity and solvency such that short-term profitability issues can be withstood.

Most farmers, however, will be eroding working capital. After building liquidity from 2006 through 2012, many farms will be faced with working capital that is back to levels before the buildup. Dealing with the underlying profitability problem will be a key to future financial success. 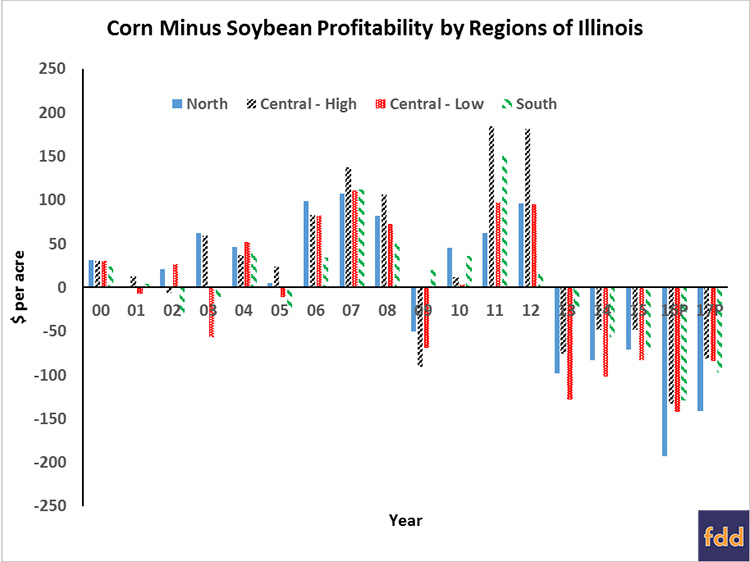 The slides for this presentation can be found at:

Schnitkey, G. “Break-Even Levels for Corn and Soybeans to Have the Same Profitability.” farmdoc daily (6):169, Department of Agricultural and Consumer Economics, University of Illinois at Urbana-Champaign, September 7, 2016.