Net incomes for Illinois grain farms are projected lower in 2017 than for 2016. If these projections hold, weakening of financial position will continue in 2017. Trend yields and commodity prices of $3.80 per bushel for corn and $9.90 per bushel for soybeans are used in 2017 projections. Deviations in yields or prices from these assumptions will change 2017 incomes. Net incomes on grain farms likely will remain at low levels as long as corn prices remain below $4.00 per bushel. 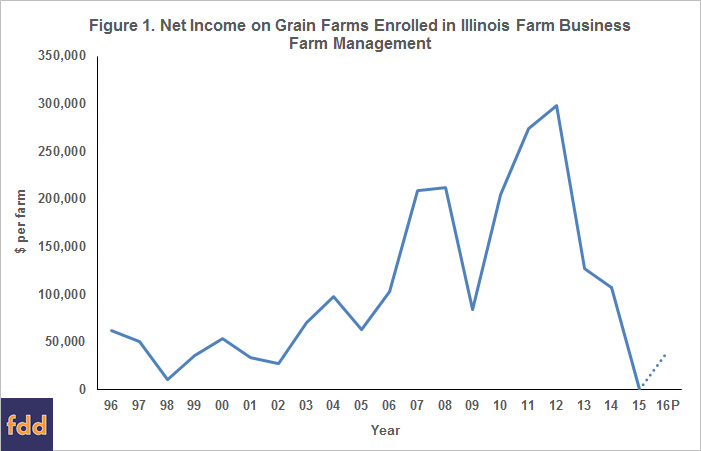 After being at higher levels from 2010 to 2012, net incomes decreased each year from 2012 to 2015. In 2015, net incomes averaged $500 per farm, the lowest level of any year between 1995 and 2015, and well below an income level needed to result in stable financial positions on grain farms. From income, farmers must provide for debt repayments, expansion, and family living. Most farms did not cover these requirements in 2015, resulting in reductions in working capital on most farms.

As usual, farm incomes will range considerably across farms. Those farms that had average yields or below will face considerably lower incomes, as appears to be the case in southern Illinois. Other farms with exceptional yields will have higher incomes,

While higher than 2015 incomes, the projected 2016 incomes do not result in the building of financial reserves on most Illinois farms. Most farms will continue to see erosions of working capital, potentially leading to the need to refinance outstanding operating loan balances.

Net incomes for 2017 are projected using trend-line yields and commodity prices of $3.80 per bushel for corn and $9.90 per bushel for soybeans. These prices are near fall delivery bids for 2017.

As revenue has declined, costs have been reduced. However, revenue continues to be projected lower each year since 2012. In 2017, lower ARC-CO payments contribute to lower projected revenues.

While projected low, a potential for higher incomes could come if corn prices increase. The $9.90 soybean price used in income projections results in profitable soybean production while the $3.80 corn price results in, at best, break-even levels for corn production. Having corn prices above $4.00 per bushel, which is not that far away from current levels, would lead to improved net incomes on grain farms.

Given trend yields, net incomes for 2017 continue to be projected low. As long as corn prices are below $4.00 per bushel, incomes on Illinois grain farms will remain low, resulting in continuing erosion of financial positions on many grain farms.

The author thanks the local Farm Business Farm Management (FBFM) Associations across the State of Illinois for the use of this data. Without their cooperation, information as comprehensive and accurate as this would not be available. FBFM, which consists of 5,700 plus farmers and 62 professional field staff, is a not-for-profit organization available to all farm operators in Illinois. FBFM field staff provide on-farm counsel with computerized recordkeeping, farm financial management, business entity planning and income tax management. For more information, please contact the State FBFM Office located at the University of Illinois Department of Agricultural and Consumer Economics at 217-333-5511 or visit the FBFM website at www.fbfm.org.