On February 23rd, the National Agricultural Statistical Service (NASS) released county yields for the 2016 crop year. With these yield estimates, fairly accurate estimates of 2016 Agricultural Risk Coverage at the county level (ARC-CO) payments can be obtained. We present maps showing estimated payments per base acre for corn, soybeans, and wheat. Also shown are maps giving 2016 county yields relative to benchmark yields. A table showing estimated payments per county in Illinois also is presented.

Payments for 2016 are still estimates and will vary from those presented here for the following reasons: 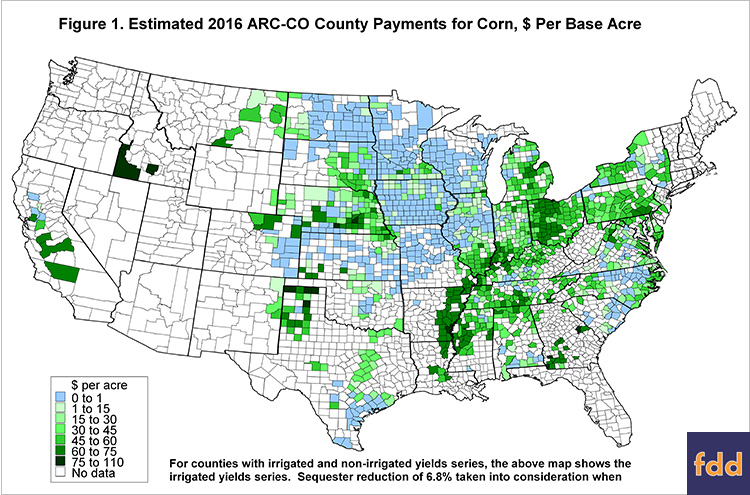 Many counties in Illinois, Iowa, Missouri, Wisconsin, Minnesota, and North Dakota are projected not to receive payments.

In Figure 2, counties with the two darker shades of blue have projected yields that are at least 1.17 times the benchmark yield. As can be seen, lower yields predominate in areas projected to receive county payments including the eastern United States, southern United States, and along the Mississippi River. 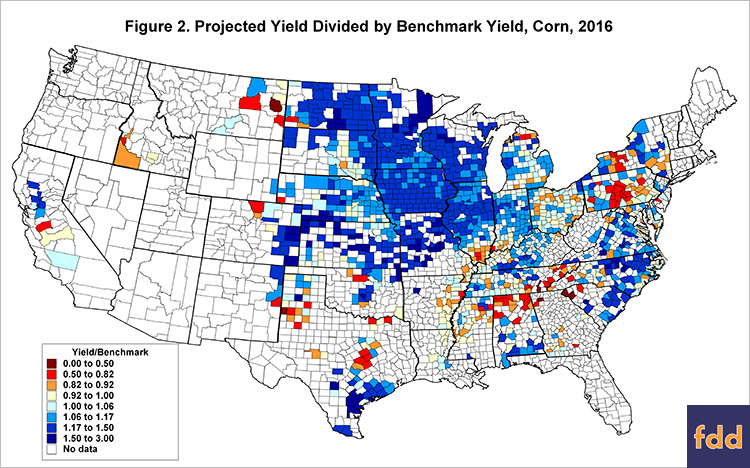 Sizable ARC-CO payments occur in some counties in eastern seaboard states: New York, Pennsylvania, Maryland, Delaware, Virginia, and North Carolina. Payments also occur in Louisiana, Mississippi, Alabama, and Tennessee (see Figure 3). Most counties in the Midwest are not projected to receive a payment. 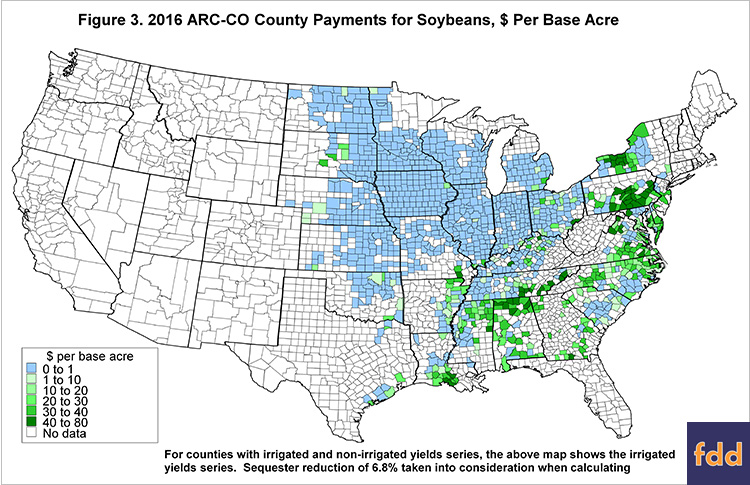 The 2016 MYA price used in projections is $9.60 per bushel, 19% below the benchmark price of $11.86. To receive a payment, the 2016 county yield must be higher than .92 of the benchmark yield (see the corn discussion for how this factor is determined. Most counties in the Midwest had exception yields, resulting in county yields significantly above benchmark yields (see Figure 4). As a result, ARC-CO is not projected to make payments in the Midwest. Those areas with lower yields are projected to receive payments. 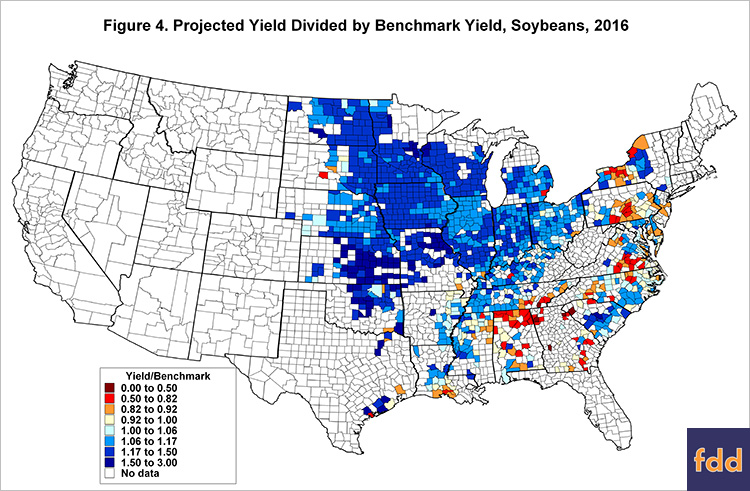 Many counties in the United States are projected to have ARC-CO payments for wheat (see Figure 5). Exceptions are the heart of the wheat belt in Nebraska, Kansas, Oklahoma and Texas. 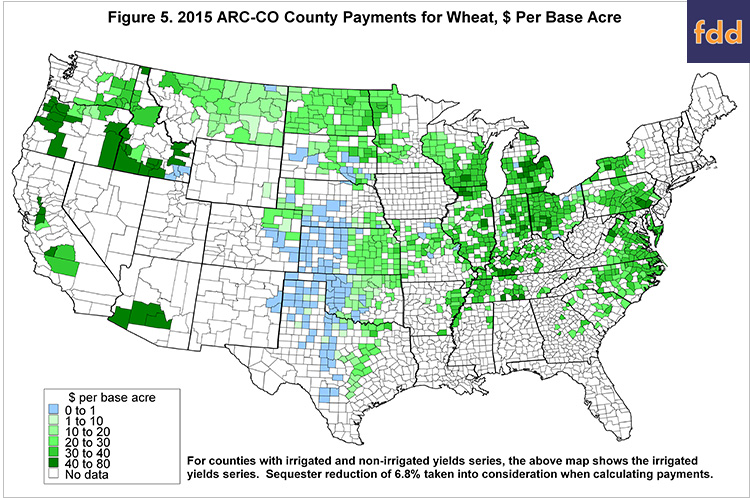 The 2016 projected price is 3.85, well below the benchmark price of $6.70. Those counties not having ARC-CO payments have 2016 county yields that are 1.50 higher than the benchmark yield (see Figure 6) Obviously, these areas having exceptional yields are in the areas where no ARC-CO payments are occurring. 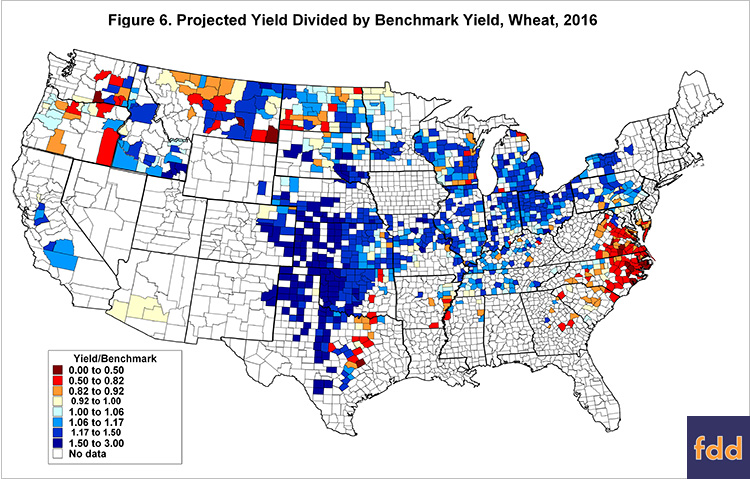 Estimated corn, soybeans, and wheat payments for Illinois counties are shown in Table 1. 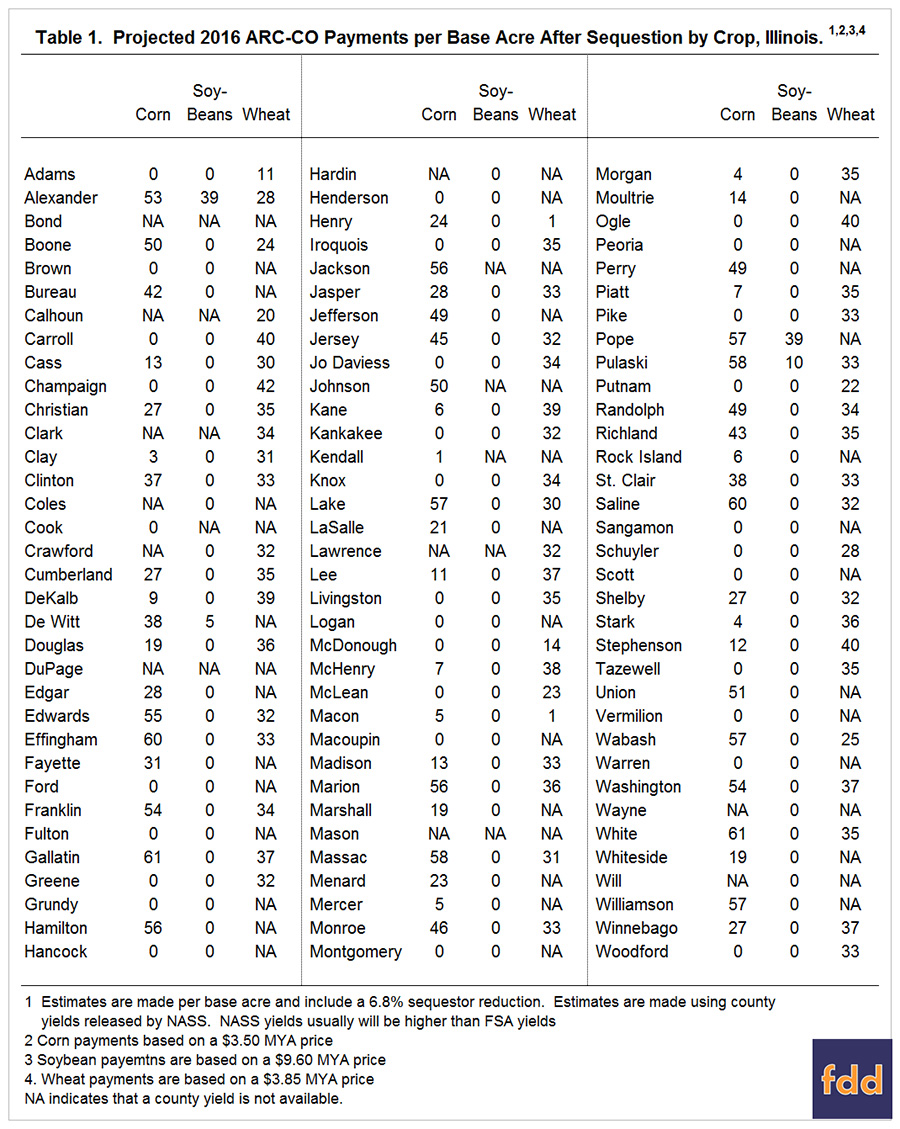 Because final yields and prices are not yet known, actual ARC-CO payments are likely to vary from the estimates shown in this article. The final yields used in calculating payments can differ from the yields released by NASS, and will also cover additional counties in the US. The final MYA price levels for corn and soybeans will not be known with certainty until the marketing year ends in August. However, where NASS yields are available, estimates for the 2016 ARC-CO payment levels can be helpful for planning purposes.