The House Agriculture Committee of the new Congress began preparation for the 2018 Farm Bill reauthorization debate with a hearing titled “Exploring the Economic Outlook in Rural America” on February 15. In preparation for the reauthorization debate, this article examines the geographical distribution of the members of the House Ag Committee and compares it to the political footprint for the traditional farm commodity coalition (farmdoc daily August 11, 2016).

USDA classifies each of the lower 48 states into ten Farm Production Regions (farmdoc daily? December 5, 2013). The regions provide rather simple and consistent groupings that are agriculturally and economically similar. As shown in Figure 1, these regional definitions share many similarities to the political footprints of the farm coalition as outlined in our previous posts. For example, corn production dominates the Corn Belt region, and wheat production is concentrated in the Northern and Southern Plains regions. Similarly, cotton production is predominately found in the Southern Plains, the Delta States, and the Southeast, with some production occurring in the Appalachia Region (in eastern Virginia and North Carolina). Also, as previously discussed, all three major commodities of the historic coalition are produced in the Delta States region. 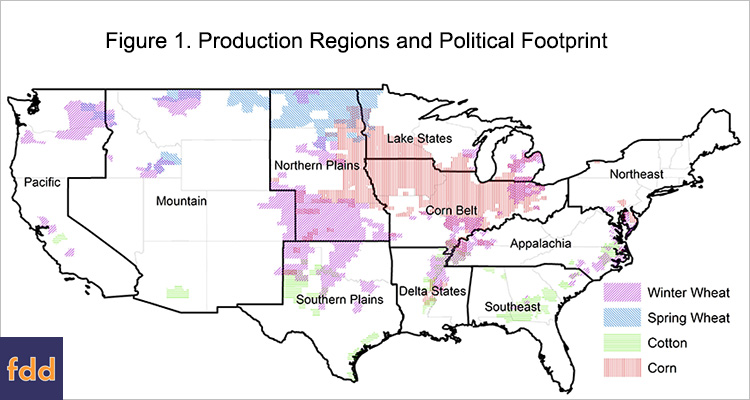 The House and Senate Ag Committees will manage the process for reauthorizing the farm bill, which includes drafting the legislation to be considered in committee and on the respective floors. The partisan and geographic make-up of the committee will influence the direction the bill takes and can provide indications of policy priorities. Figure 2 illustrates the geographical and partisan make-up of the House Ag Committee. It adds color-coding for the district of each member of the House Ag Committee using the standard red to indicate Republicans and blue to indicate Democrats (note: as a non-voting member, the Representative from the Virgin Islands is not included). 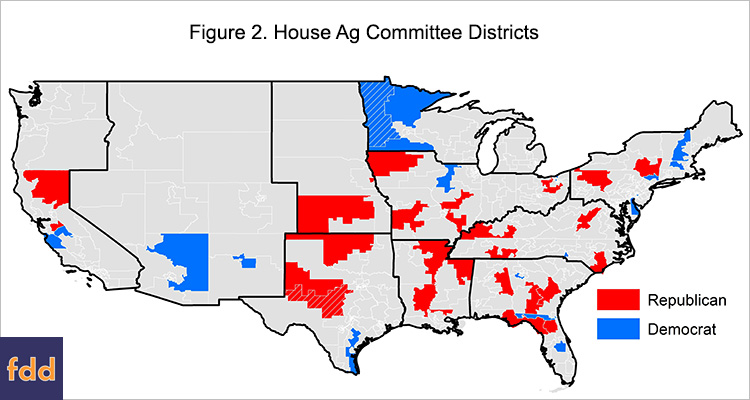 First, the map makes clear the Republican majority on the Committee, reflecting the party’s majority in the House. The map also highlights the district of Chairman Conaway (R-TX) and that of Ranking Member Peterson (D-MN). Second, it also provides a valuable picture of the geographic distribution of committee members. For example, Republicans clearly dominate the Southern regions (Southern Plains, Delta States and Southeast), as well as having the only seats from the Northern Plains. They also hold most of the Corn Belt seats. Democrats appear to dominate only the Lake States and the Northeast. Democratic members are otherwise scattered throughout the remaining regions. Figure 3 confirms this partisan and geographic breakdown numerically. 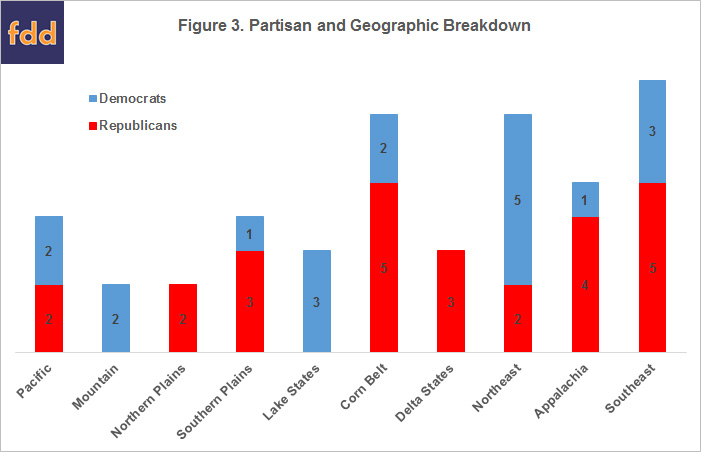 Ultimately, legislating comes down to vote counting. Republicans hold a 26 to 19 vote edge in the Committee. Additionally, cotton has a strong position in terms of votes. Among the footprints for the traditional farm coalition, cotton’s footprint holds the largest bloc of votes with 20 members, 15 of them Republicans and including the Chairman. By comparison, the major corn producing districts on the committee carry 11 votes (Lake States plus Corn Belt and the one seat from Nebraska), 6 of whom are Republicans. Notably, the major corn production districts also include Ranking Member Peterson (D-MN).

Combined, these figures provide some potential initial perspective on the farm bill debate in the House Ag Committee. Location is an indicator of the policy preferences, as well as which commodities within the traditional coalition can be expected to take priority. The vote counts by footprint or region are indications of political strength in the debate. In other words, the footprint is likely to determine the priorities and the vote count is a measure of ability to achieve the priorities.

As indicated by the hearing, a big focus of the farm bill debate is likely to involve the increasing financial pressures on some farmers due largely to the impact of relatively lower crop prices on net farm income (see, testimony of USDA Chief Economist Dr. Robert Johansson). Dr. Johansson informed the committee that four years of record (or near-record) crops have exceeded worldwide demand, holding down prices. This is especially true for wheat after four consecutive years of record-breaking production in the U.S. pushing prices to their lowest levels since 2005/2006. Corn is also experiencing the largest carryover stocks since the late Eighties and prices are expected to fall another 10 cents. Comparatively, cotton and soybeans are the only potential bright spots with USDA expecting better returns thanks to expected increases in exports. Finally, Dr. Johansson concluded by pointing out the need for farmers to adjust to the lower prices, including reductions in land rent and other operating costs.

The economic outlook adds further to the expectations for the farm bill debate in terms of priorities and vote strength. Of the three commodities in the traditional coalition, wheat appears to possess the most significant economic concerns, followed by corn and then cotton. The maps indicate, however, that the wheat footprint has a lower number of votes than cotton or corn, even if the Delta is added to its count. By comparison, cotton has the strongest vote count of the three (including the Chair) but with the best economic outlook. It is also the only commodity without base acres in the major farm payment programs (ARC and PLC). Finally, corn stands in the middle in terms of both votes and economic outlook. At this stage of the process, it is too early to make accurate predictions and much remains to be determined, but the vote counts and commodity footprints can add to our understanding of the coming farm bill debate.

Kuethe, T., and J. Coppess. "Mapping the Fate of the Farm Bill." farmdoc daily (3):231, Department of Agricultural and Consumer Economics, University of Illinois at Urbana-Champaign, December 5, 2013.

Back To Top
×Close search
Search
×