The two Federal safety net program providing risk protection to crop farmers are crop insurance and the commodity title of the farm bill, with commodity title payments coming through Agricultural Risk Coverage (ARC) and Price Loss Coverage (PLC) programs. Crop insurance guarantees will be higher in 2017 than in 2016, particularly for soybeans. Commodity title program payments likely will be limited in 2017. The “transitional” payments associated with ARC likely are ending with the 2017 crop year.

With higher projected prices, higher revenue guarantee can be obtained for the same coverage level, given that the Actual Production History (APH) yield has not gone down. On many Illinois farms, 2017 APH yields will increase as 2016 yields were exceptional. Including these higher 2016 yields and dropping a lower yields that are at least ten years old will increase APH yields.

Many farmers in Illinois have not received crop insurance payments on soybeans in the past decade. As a result, some farmers are considering dropping soybeans insurance for 2017 as a cost-saving measure. The relatively high 2017 projected price should cause reconsideration. Soybean prices could come under considerable pressure if farmers switch acres to soybeans, potentially resulting in lower soybean prices. If soybean prices decrease, the revenue protection offered by crop insurance may be a valuable.

For soybeans, some farmer may wish to switch from RP to Area Revenue Protection (ARP) at the 90% coverage level. So doing will increases price protection. More detail on 2017 product selection decisions is discussed in the following YouTube video: https://youtu.be/jlNkMtZZPOA

ARC at the county level (ARC-CO)

Well over 90% of the corn and soybean base acres were enrolled in ARC-CO during the 2014 Farm Bill signup. ARC-CO has made sizable payments related to the 2014 and 2015 crops. For 2016, ARC-CO payments will be lower than in 2015 and many farms will receive no payments. For the 2017 crop, ARC-CO payments should not be expected.

Expected 2016 and 2017 payments are illustrated in Figure 1, which shows ARC-CO payments for corn in DeKalb County, Illinois. Figure 1 is a screen shot from the ARC PLC Payment Tool, a Microsoft Excel spreadsheet that can be downloaded from the FAST section of farmdoc. ARC-CO payments for corn were $62.07 per acre in 2014 and $77.94 per base acre in 2015 (see Figure 1). The 2016 marketing year is not over and the Farm Service Agency (FSA) has not released county yields. The National Agricultural Statistical Service (NASS) yield for 2016 is used to estimate the FSA yield. As a result, the 2016 payment is an estimated. The 2016 payment is estimated at $26.28 per base acre. 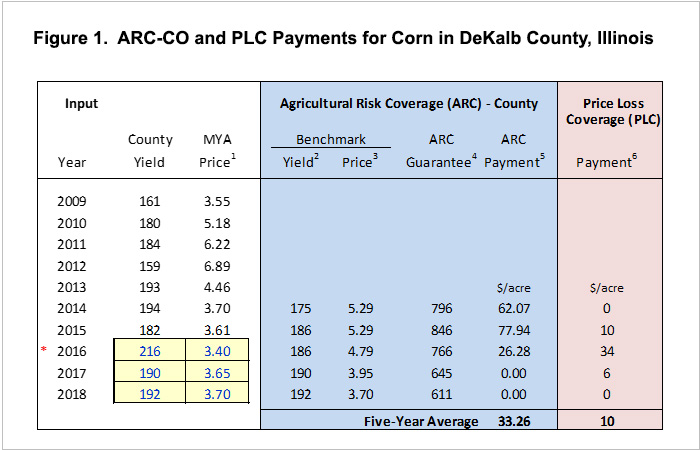 For 2017, the ARC-CO payment is estimated at $0 per acre. This estimate is made at a yield of 190 bushels per acre and a $3.65 market year average price. Payments could occur if either county yield or MYA price is lower. At a 190 bushel county yields, payments would occur if prices are below $3.36 per bushel.

It seems reasonable to expect no ARC-CO payments for the 2017 crop. ARC-CO is designed to make “transitional” payments aiding farmers in adjusting to lower revenue. Payments in previous years aid in making those adjustments. As a result, no payments in 2017 are as expected.

More detail on ARC-CO payments is provided in the following YouTube video: https://youtu.be/oPSYQFEkhi0

Crop insurance offers higher guarantees in 2017 than in 2016, particularly for soybeans. ARC-CO payments likely will be limited. ARC is designed to make payments when revenues decrease over a longer period. Prices have been reduced for several years, and the payments offered by ARC can be expected to have come to an end. We are then left with the within year revenue protection offered by crop insurance.