With hearings underway in the House and Senate Ag Committee, the process for writing the next farm bill is taking its initial steps. Echoes of the difficult process for the 2014 Farm Bill are being heard in calls for reductions in Federal spending, but the outlook is much different. The Congressional Budget Office (CBO) released an updated estimate for the outlays from the 2014 Farm Bill and this article reviews those estimates for farm programs, crop insurance and conservation (see CBO January Baseline).

With the introduction of Congressional budget discipline in 1974, the role and impact of CBO on farm bill debates and program development has grown significantly (CBO website). Under budget rules, CBO estimates Federal outlays for 10 years as if existing programs continued without change; this is the baseline (farmdoc daily November 3, 2016). This baseline establishes the spending parameters for the House and Senate in the next bill and under budget rules any increase in spending has to be offset by a corresponding decrease, all estimated by CBO against the baseline. The baseline as estimated by CBO in the year the committees begin writing a bill will set the parameters. Given that the current bill does not expire until 2018, the estimates next March are likely to constitute the applicable baseline. The recently released estimates from January, however, can provide important indicators for the direction CBO is headed and what it might mean for the debate, process and policy development.

There are three key developments in the January baseline. First, CBO’s price forecasts for the major supported commodities are shown in Figure 1, along with each commodity’s reference price. CBO forecasts crop prices for corn, soybeans, wheat and cotton at lower levels than for the previous farm bill debate, which aligns with recent market experience. Importantly for baseline purposes, CBO forecasts prices for wheat to be below the reference price. This forecast should result in expectations for significant payments under the Price Loss Coverage (PLC) program. Comparatively, corn prices are forecast to be near the reference price. CBO would estimate payments under PLC but recall that the vast majority of corn acres elected the Agriculture Risk Coverage, County Option (ARC-CO) program (farmdoc daily, June 16, 2015). Soybean prices are forecasted to be well above the reference price. This would substantially limit any PLC payments, but most of the soybean base also elected ARC-CO. Noticeably, cotton does not have a reference price because cotton base was not eligible for either ARC or PLC in the 2014 Farm Bill due to the WTO dispute with Brazil. Also notable, CBO is forecasting a slight upward trend in cotton prices throughout the baseline in what appears to be a relative recovery from recent prices. 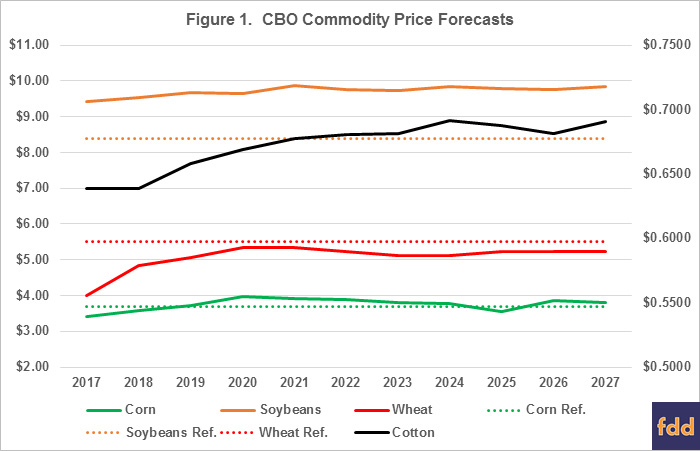 As indicated, the price forecasts CBO uses are important because they determine estimates for program outlays, which are shown in Figure 2. This figure breaks CBO outlay estimates down by PLC, ARC-CO, crop insurance and conservation. 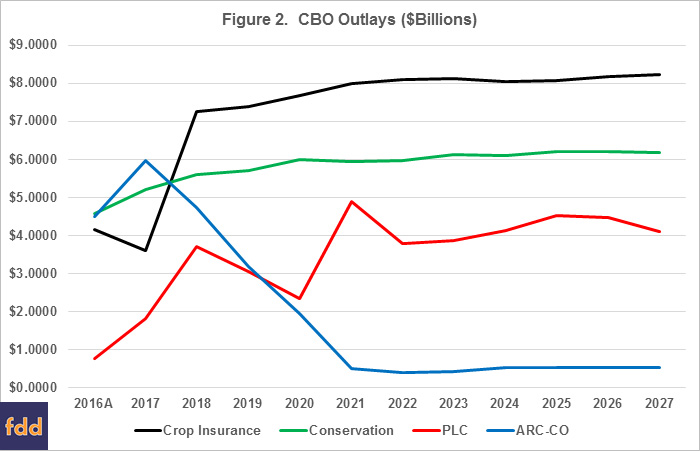 Figure 2 highlights the significant increase in commodity program spending in recent years and that it is largely driven by ARC-CO payments and relatively lower prices. Spending for that program is estimated to decrease considerably in the out years. By comparison, spending for PLC is initially low but is estimated to increase significantly after 2020. CBO continues to estimate that crop insurance outlays will grow and that they will outpace commodities program outlays for much of the baseline. Finally, conservation expenditures are also estimated to exceed commodities program spending in the out years of the baseline. These estimates do somewhat align with the original estimates for the 2014 Farm Bill’s spending (farmdoc daily May 22, 2014).

Figures 3 and 4 provide the CBO breakdowns by covered commodity and program (ARC-CO or PLC) in the baseline. 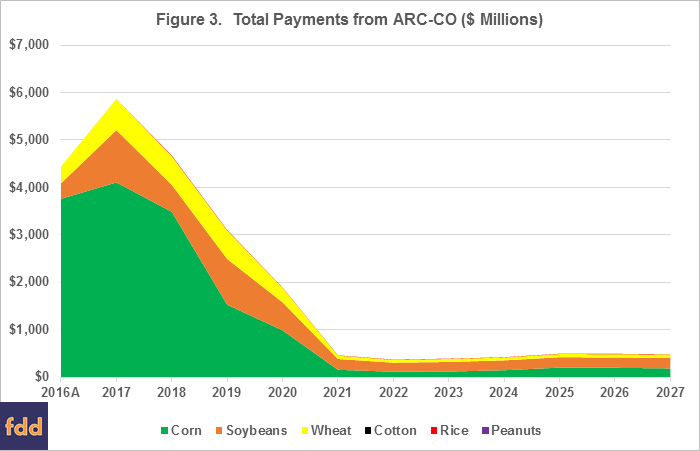 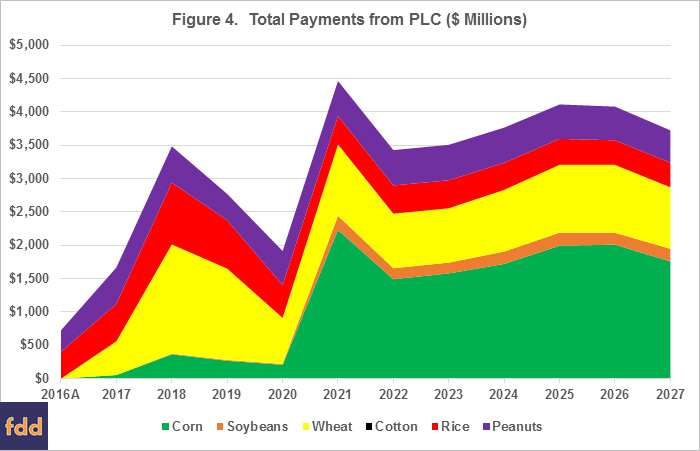 Figures 3 and 4 more clearly show the shift from ARC-CO to PLC and that it is largely driven by spending on corn as CBO revises participation assumptions from one program to another. There are two forces at work in these spending estimates. First, because ARC-CO uses a 5-year Olympic moving average for prices in the revenue calculation, the program benchmark and guarantee are adjusting to the lower forecasted prices. That adjustment would be expected to result in reduced payment estimates under CBO scoring and can be seen in the decrease for fiscal years 2018 through 2020. Second, and arguably more consequential to these estimates, CBO is assuming that after the 2018 crop year farmers holding corn base will re-evaluate their farm program election in the lower price forecast and switch their acres out of ARC-CO to PLC. In fact, CBO is assuming that beginning with the 2019 crop year 82 percent of corn base will be in PLC and only 17.6 percent in ARC-CO. This compares to 93 percent in ARC-CO through 2018 and only 6.6 percent in PLC. CBO is also assuming similar participation numbers for wheat (82 percent in PLC beginning in 2019 compared to 42.5 percent through 2018), while 48.7 percent of soybean base makes the change (compared to 96.6 percent in ARC-CO). Given the timing shifts and marketing year average calculations for these programs, the revised participation assumptions show up in fiscal year 2020 (farmdoc daily November 22, 2016).

The January 2017 CBO estimates are not expected to be the baseline for the next farm bill. The estimates do, however, provide important indicators of CBO assumptions about price forecasts, program and farmer responses, as well as expected Federal outlays. If these assumptions and forecasts hold into next year, they will likely result in a baseline similar to the January estimates. The January baseline also adds more context to the expectations for the next debate. First, the baseline is likely to complicate writing the farm bill because lower prices are expected to result in a lower baseline. Second, the lower price forecasts are also shifting spending estimates out of ARC-CO and into PLC, especially for corn base. Third, both the crop insurance and conservation titles are expected to have higher outlays than the commodities title in the later years of the baseline. The baseline creates a zero-sum process for any new programs or any increases in existing programs; new spending has to be offset by reductions in estimated spending in the baseline. CBO’s current estimates indicate that for increased spending within the commodity title, offsets will have to come out of PLC. While crop insurance and conservation have higher expected outlays than commodities, experience teaches that finding offsets from those programs creates political challenges and opposition.

Zulauf, C. "2014 Farm Bill: the Big Picture As Seen Through Spending." farmdoc daily (4):95, Department of Agricultural and Consumer Economics, University of Illinois at Urbana-Champaign, May 22, 2014.