Recent news from the Trump Administration has sowed confusion about the President’s intentions with respect to the North American Free Trade Agreement (NAFTA) (see e.g., Appelbaum and Thrush). Early this week, President Trump suggested that the United States would pull out of NAFTA. Later in the week, he said the US will stay in NAFTA, but that the agreement would be reopened for renegotiations (see e.g., Landler and Appelbaum). NAFTA is a trade agreement between the Canada, Mexico, and the United States and was put in place in 1994 (see e.g., USTR). For Midwest farmers, renegotiating NAFTA is a concern because Canada and Mexico import significant amounts of corn and soybeans.

Imports of Corn and Soybeans by Canada and Mexico 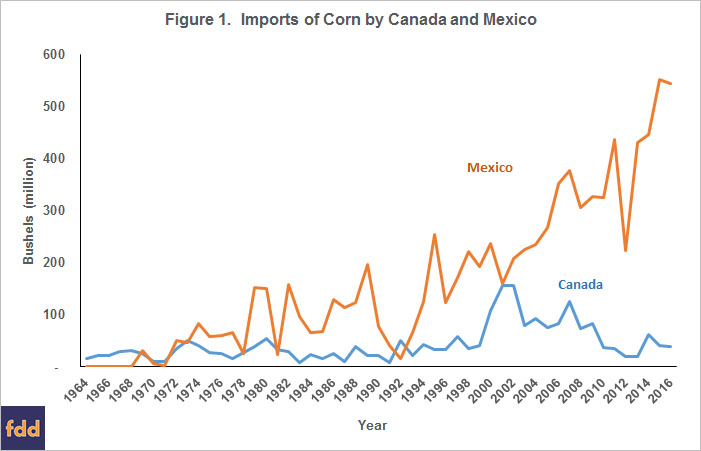 Not all of these imports of corn by Canada and Mexico came from the U.S., but it is safe to assume that a large portion of the imports did. From 2014 to 2016, the U.S. produced an annual average of 14,322 million bushel of corn. Exports were 1,996 million bushels, or 14% of total production. Together Canada and Mexico’s imports of 560 million bushels constitutes 28% of total US corn exports. Reduction of these imports would have a disproportionately large impact on corn prices, as the relationship between demand quantities and prices are inelastic: a percentage quantity change results in a larger percentage change in price. 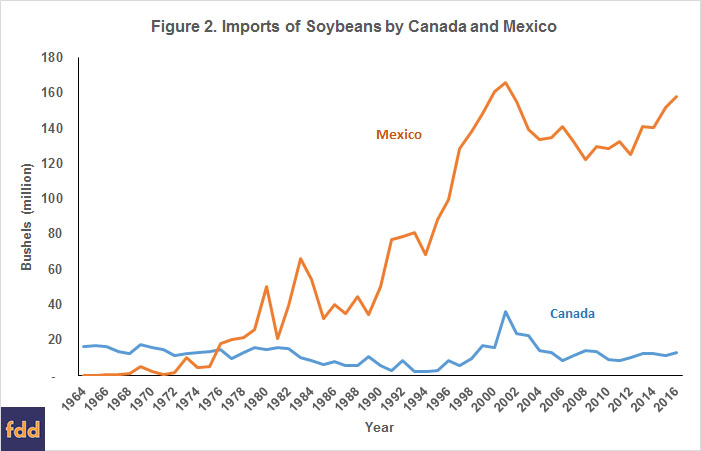 Soybean production in the U.S. averaged 4,053 million bushels from 2014 to 2016. For the same time period, exports averaged 1,931 million bushels of soybeans representing 48% of production. If trends continue, over 50% of the soybean crop produced in the Unites States will be exported in the near future. Taken together, Canada and Mexico’s soybean imports of 162 million bushels represent 8% of the exports from the U.S. Similar to corn, a reduction in soybean exports would result in a large change in soybean prices.

Exports are important sources of use of corn and soybeans, and particularly so for soybeans. Mexico and Canada are important customers of U.S. products. Potential disruptions in the movements of grains could have negative impacts on prices.

The importance of export to domestic agriculture is likely to grow in the future. Technological changes will continue to occur in the United States, leading to higher yields and more corn and soybean supply. At this point, one of the areas of continued growth in use of U.S. corn and soybeans is likely to be exports. If exports do not grow, negative impacts can be anticipated for corn and soybean prices.

Being a reliable supplier is an important characteristic of agricultural exporters. If an exporter is not viewed as reliable, other countries may look elsewhere for grain supplies. Some reactions along these lines have taken place because of trade discussions coming from the U.S. Early in 2017. For example, Mexico has threatened to place a tax on U.S. corn imports in response to the President’s comments about NAFTA and has also begun to buy corn from Argentina and Brazil (see e.g., Rapoza). Whether these efforts have long term negative impacts on U.S. agricultural trade remains to be seen.