Over the past 25 years, there have been shifts in crops planted in the United States. Overall, acres in feed grain crops decreased while acres in oilseed crops increased. Feed grain crops losing acres were wheat, oats, barley, and sorghum. The only feed grain crop with a large acre increase was corn. Within oilseed crops, soybeans accounted for 90% of the acres in the category. Over time, U.S. Farmers have tended to specialize production in corn and soybeans in the United States.

Acre changes are reported for all crops that the U.S. Department of Agriculture (USDA) categorized as “principal crops” in its 2017 Prospective Planting Report. In addition, acres are reported for six other crops for which National Agricultural Statistical Service (NASS) has crop data: flaxseed, lentils, mustard, peas, rapeseed, and sunflowers. The principal crops along with the additional six crops can be roughly categorized as field crops. Not included in this analysis are changes in vegetables, fruits, and tree bearing crops.

In 2016, there were 322 million acres planted in these field crops. Modest variations in total acres in field crops occurred, with a range from 315 million acres in 2011 to 335 million ACRES in 1996. A trend of increasing or decreasing acres devoted to field crops does not exist (see Figure 1). 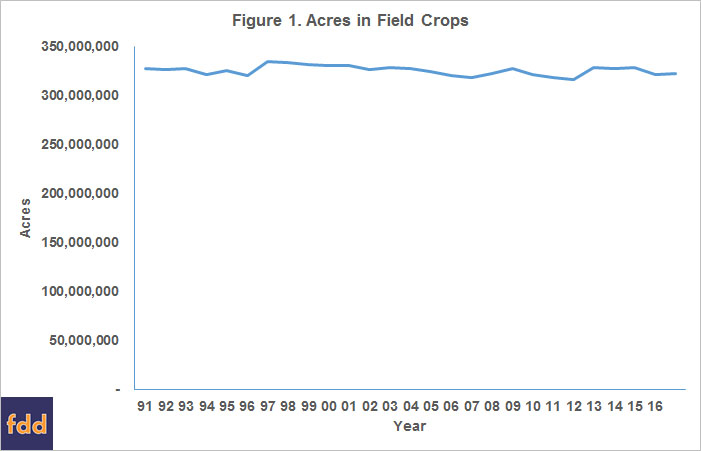 To make acre change comparisons, acres are averaged from the years from 1991 to 1993 (1991-93) and from 2014 to 2016 (2014-16). Three-year averages are used to minimize the influences of anomalous factors impacting acreages. The year 1991 is selected for the first year as that is the first year that NASS reported acres for several of these crops.

Table 1 shows a list of crops for which acre changes are reported. These crops are divided into four categories for making comparisons: 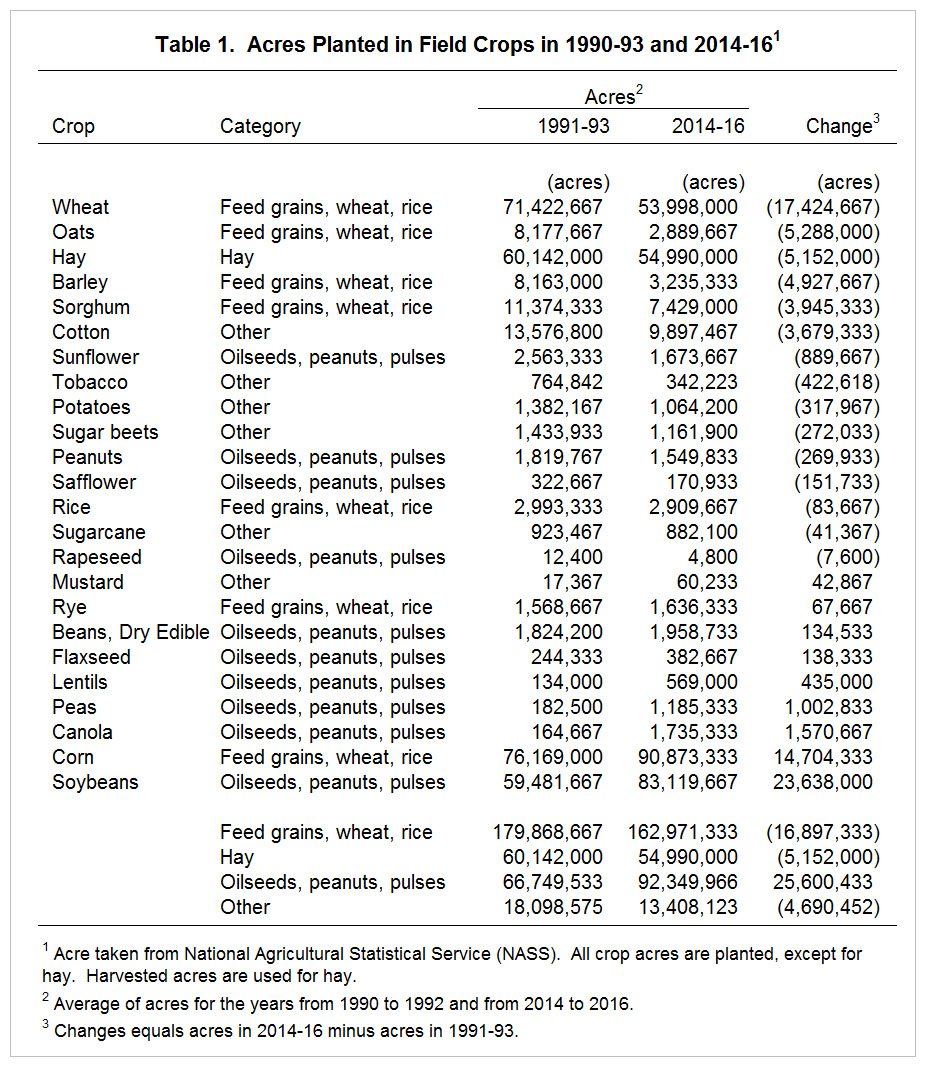 Between 1991-93 and 2014-16, six crops lost more than 1,000,000 acres; wheat, oats, hay, barley, sorghum, and cotton (see Table 1). By far, the crop with the largest loss in acres was wheat, with a loss of 17 million acres. Wheat was followed by oats, hay, barley, sorghum, and cotton. Of these highest acre losing crops, four to the crops are categorized as “feed grains, wheat, and rice”: wheat, oats, barley, and sorghum. 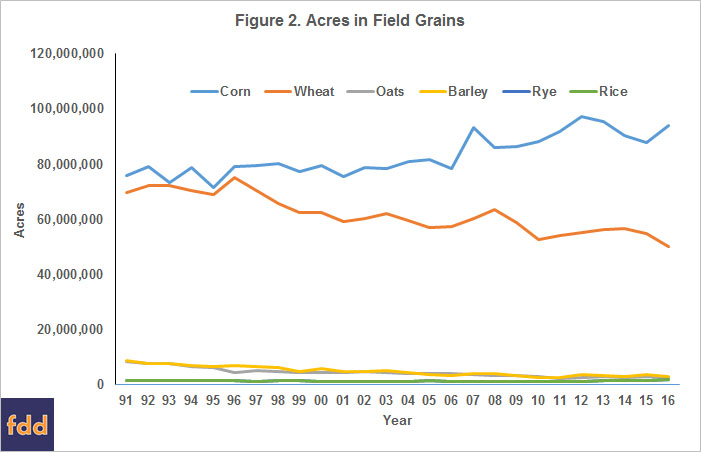 These acre shifts can be attributed to two factors. First, much of the animal feed use shifted away from other feed grains to corn. Prices and supply of corn relative to other crops likely impacted these factors. The second is the increased use of corn in the production of ethanol.

Soybeans was by far the leading “oilseed, peanuts, and pulse” crop. In 2016, there were 83 million acres of soybeans compared to 8 million acres in the other oilseed. Overall, soybeans account for 91% of acres planted to oilseeds in the U.S.

Soybeans acres have increased since 1991 from 59 million acres to 83 million acres. Other crops in the “oilseed, peanuts, and pulse” category have remained stable at 8 million acres (see Figure 3). 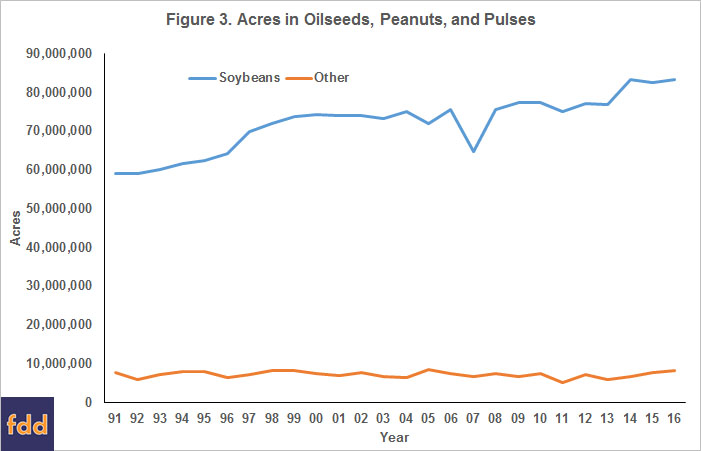 Concentration in Corn and Soybeans

The above acre changes resulted in a continuing concentration into corn and soybeans (see Figure 4). In 1991, corn and soybeans accounted for 41% of the acres in field crops. This percentage has been increasing at a steady rate over time, reaching 55% in 2016. 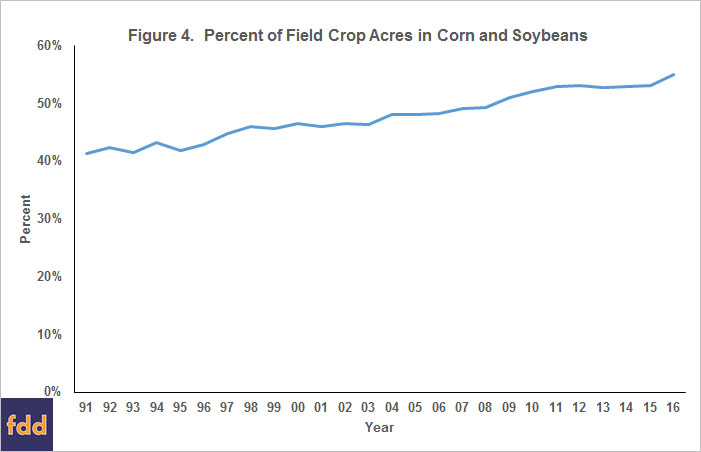 During the last 25 years, acres have shifted away from “feed grains, wheat, rice”, “hay”, and “other” categories to “Oilseeds, peanuts, pulse” category. Within the “feed grains, wheat, rice” category, corn has become the dominate feed grain in terms of acres. Soybean is the dominant oilseed in terms of acres. Overall, these trends have led to a specialization in corn and soybeans.