The Price Loss Coverage (PLC) program was the overwhelming choice of producers with peanut base acreage (99.7% of peanut base enrolled in PLC), due mainly to the fact that the fixed reference price guarantee was above projected market prices for peanuts at the time of the decision (see farmdoc daily January 27, 2015). Payment expectations in both 2014 and 2015 provided a strong incentive to plant peanuts without regard to falling market prices. Based on data reported by the FSA (2014 and 2015 program payment data here, and base acre data here), the average ARC/PLC payment received for 2014 was $162 per peanut base acre and $125 per generic base acre attributed to peanuts. In 2015, the average ARC/PLC payments were $265 per peanut base acre and $181 per generic acre attributed to peanuts. Current projections for 2016 are for more large PLC payments on peanut base, and thus also generic acres attributed to peanuts and covered by the PLC program (the 2015 PLC payment rate for peanuts was $0.0745/lb, the projected payment rate for 2016 is currently $0.0725/lb).

More than 50% of the acreage planted to peanuts since 2014 has been on farms with generic base acreage (see Table 1). In 2014, 53% of peanut plantings were attributed to generic acres. This percentage increased to 57% in 2015, and 60% in 2016. This has significantly increased the number of acres eligible for peanut program payments from the peanut base level of around 1.96 million acres to over 2.6 million in 2014 and more than 2.9 million in 2016. In 2014 and 2015 combined, over $1 billion in PLC and ARC program payments went to producers with peanut base acreage and generic acres attributed to peanuts. At the very least, the existence of and flexibility associated with generic acres seems to have influenced on what Farm Service Agency farms peanuts are planted. 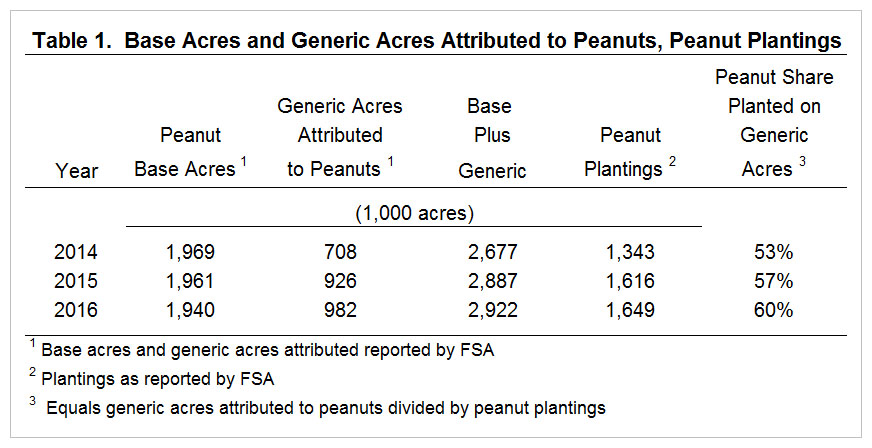 A question then is: does the existence of the potential for large peanut program payments influence plantings and prices? Some evidence is provided by looking at a history of peanut acreage and peanut prices. As shown in figure 1, peanut prices and planted acreage both trended downward from peaks in the early 90s through the mid-2000s (note the end of this period captures the impacts of the elimination of the peanut allotment program in the 2002 Farm Bill). Prices recovered from 2005 to 2011, while planted acreage continued to trend down but exhibited more year-to-year variability. Since 2011, the marketing year average price for peanuts has again trended downward, falling below the PLC reference price of $0.2675/lb ($535/ton) since the PLC program took effect in 2014. At the same time, acreage planted to peanuts has increased each of the past 4 years, from less than 1.1 million acres in 2013 to over 1.75 million acres in 2017 – the highest level of planted acres since 1990 (1.8 million) and 1991 (more than 2 million). 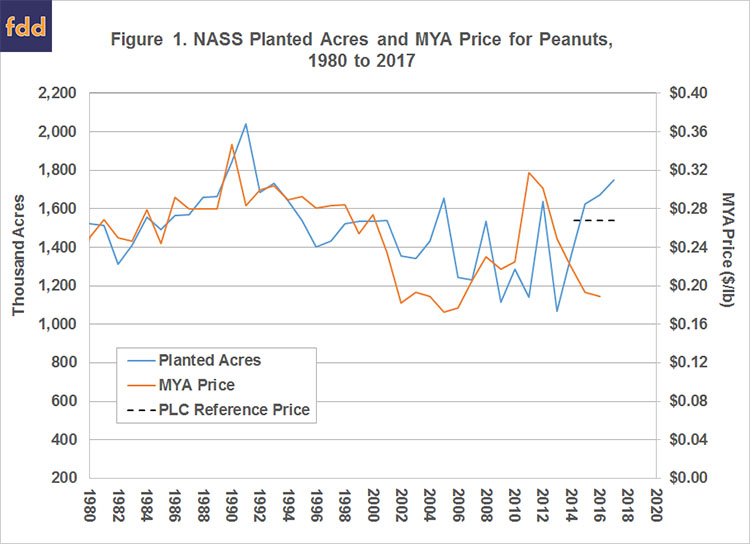 Over the previous Farm Bill, from 2008 to 2013, planted acres to peanuts averaged 1.3 million acres. Since 2014, planted acreage has averaged 1.68 million acres – an increase of 30%. Many factors could be contributing to this seemingly counterintuitive acreage response to declining prices from peanut growers. For example, declining prices over the past 3-4 crop years is not unique to peanuts; planting decisions are ultimately made based on comparing returns across the menu of crops a producer may choose to plant. Peanut returns relative to other crops such as soybeans, cotton, and corn in the peanut producing regions of the US have reportedly improved even with falling peanut prices.

However, recent attention has been giving to the relatively high reference price for peanuts, which was increased by the 2014 Farm Bill, and the potential for farmers to plant peanuts to generic base acres and receive program payments for peanuts (see here for an example). In fact, the Congressional Budget Office recently analyzed the savings that would be created by eliminating ARC and PLC payments on generic base acres. These estimated savings would come from reduced payments to all commodities attributed to generic base acres, but the report specifically notes the impact on acres planted to peanuts and peanut prices.

Since the 2014 Farm Bill took effect, acres planted to peanuts have increased each year, averaging 30% more planted acres than over the 6-year period covered by the 2008 farm bill. At the same time, peanut prices have been falling from highs of more than $0.30/lb in 2011 to less than $0.20/lb over the past three crop years. The increased acreage during a time of falling prices has been associated with improvement in peanut returns relative to other crops, but also with the relatively high reference price level provided to peanuts – $0.2675/lb – via the PLC program and ability of growers to plant peanuts to generic base acreage and receive peanut program payments. The data on peanut plantings, and the share of those plantings on generic base acreage tends to support the hypothesis that the higher price trigger for the PLC program recoupled to planting decisions via generic base may be impacting the planting decisions of peanut growers.