Planting conditions in Illinois have been less than ideal in 2017. Rains have delayed planting in some areas. Cool and wet weather has led to emergence problems and hard-to-make replant decisions. While the planting season has been difficult, there are not strong relationships between state-level corn yields and variables used to gauge crop progress at this point of the year: planting progress, surplus moisture, and crop conditions. As is typical, summer weather will play the largest role in determining final corn yield in 2017.

In its May 22nd Illinois Crop Progress and Condition report, the National Agricultural Statistical Service (NASS) indicated that 89 percent of the corn was planted in Illinois, roughly the same as the 90% average for the past five years. From 1980 through 2016, planting percent averaged 82% by this point in the year (i.e., 20th week of the year for NASS reporting). Overall, 2017 planting progress is close to average.

Figure 1 shows planting progress and detrended average corn yields for Illinois. Average corn yields in Illinois were obtained from NASS and then stated in terms of 2017 bushels by detrending. The detrending process added 1.8 bushels times the number of years from 2017 to that year’s state yield (1.8 bushels was added to the 2016 yield, 3.6 was added to the 2015 yield (3.6 = 1.2 x 2 years from 2017), and so on). Detrending controls for the 1.8 bushel per acre increase in corn yields over time. The average of the detrended corn yields from 1980 to 2016 is 177 bushels per acre. This 177 bushel average is an estimate of expected 2017 corn yield for Illinois. 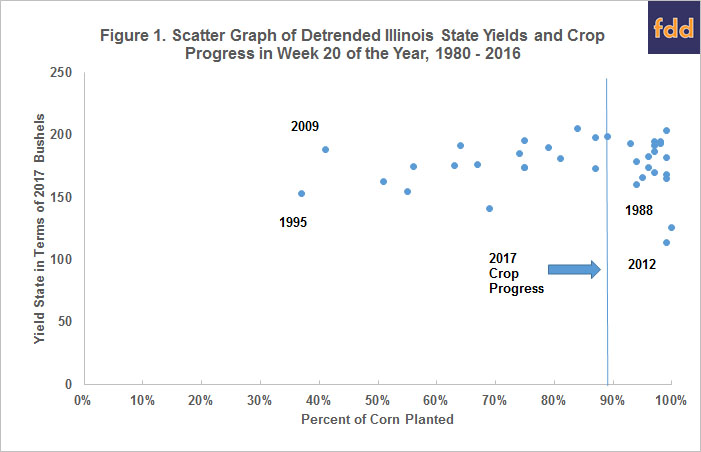 Rain has fallen in recent weeks causing concerns that excess moisture will hinder crop progress. The May 22nd Illinois Crop Progress and Condition report indicated that 35% of the farmland in Illinois had surplus moisture in the topsoil. From 1980 to 2016, the average surplus moisture at this time of the year was 30%. 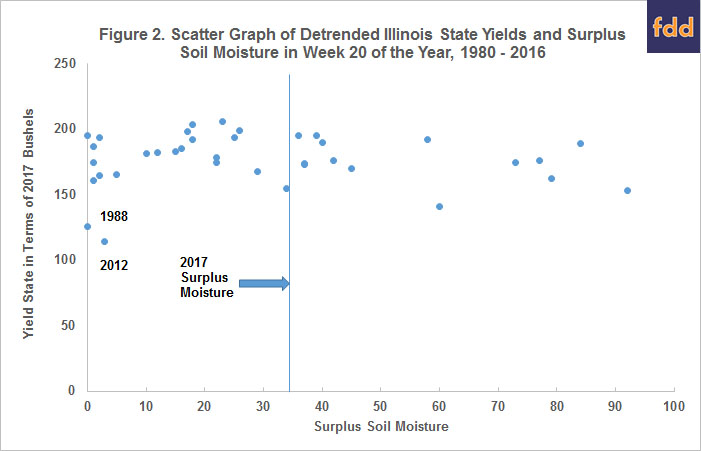 In its May 22nd Illinois Crop Progress and Condition report, NASS indicated that 51% of the corn crop was categorized as being in the good and excellent categories of crop condition ratings. From the Quickstats website, crop condition statistics are available for 11 years from 1986 to 2011. Average of the crop in the good and excellent categories at this time of year was 76%. The 51% reported for May 22nd was the lowest of the eleven years (see Figure 3). 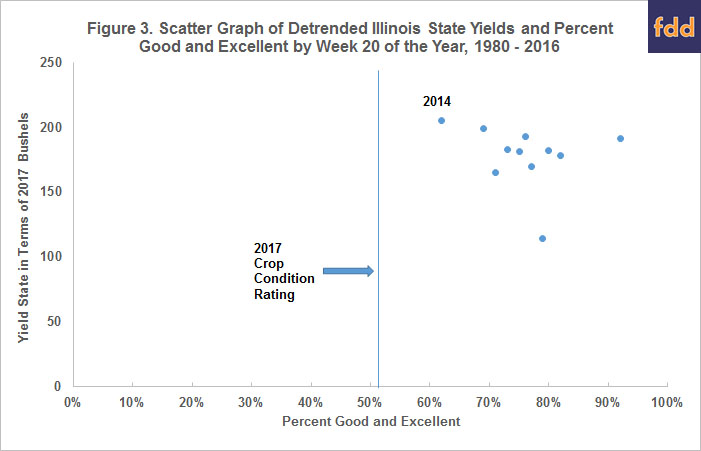 While the low percentage is troubling, crop conditions at this point of the year do not have a statistical relationship with detrended state yield (see Figure 3). Note that the highest detrended yield of 205 bushels per acre occurred in 2014 when 62% of the crop was rated as good to excellent. The 2014 crop condition was the lowest up to that point. While the low percentage in 2017 may indicate the potential for low yields, much depends on growing conditions from this time forward.

While planting has been less than ideal, little can be said about 2017 average corn yields in Illinois. Since planting has begun, prices on futures contracts for corn have not exhibited sustained movements up or down. Little predictive information on corn yields suggests that the non-response in futures prices probably is warranted.

Perhaps the highs and lows of the state yield distribution for 2017 have been eliminated. The two lowest yields since 1980 occurred in the drought years of 1988 and 2012. By this time, dry conditions existed in both years. Planting conditions so far this year do not appear conducive for over 200 bushels per acre average yields in Illinois. Again, there is little data to support this contention, particularly at the high end.

Of course, individual farms and fields can vary from the analysis presented here, particularly those fields with poorer population counts. On those fields, replant decisions still are being faced.