This article continues discussion of cotton support, a key contemporary farm policy issue (see farmdoc daily, January 28, 2016; March 9, 2017; April 13, 2017; April 20, 2017; April 27, 2017; May 11, 2017). Cotton is not a covered commodity under the ARC (Agriculture Risk Coverage) and PLC (Price Loss Coverage) commodity programs enacted in the 2014 farm bill. This decision was largely in response to a successful World Trade Organization suit by Brazil against U.S. cotton support programs. The 2014 farm bill also converted former cotton base acres into generic base acres. Generic base can receive payments for covered commodities planted on generic base. ARC-CO plus PLC payments to generic base for the 2014-2016 crop years are estimated at just over $1 billion (farmdoc daily, May 11, 2017). Concern exists that generic base payments are affecting farmers’ planting decisions. The concern was discussed in the April 20 article, which focused on peanuts. The discussion is extended to other covered commodities in this article. In particular, a regression analysis finds that the generic base program is likely associated with higher planted acres of other covered commodities as well. The higher plantings of covered commodities are likely increasing the cost of commodity programs, creating winners and losers within the agribusiness community, and causing frictions within the cotton sector.

Covered Commodities Planted on Generic Base

As the April 20, 2017 article noted, the U.S. Department of Agriculture (USDA), Farm Service Agency reports 10.2 and 9.8 million acres of generic base were planted to covered commodities in 2014 and 2016 (see data note 1). The aggregate 0.4 million acre decline masks notable changes for individual covered commodities. Wheat, sorghum, and soybean acres decreased 0.6, 0.5, and 0.3 million while corn and peanut acres increased 0.7 and 0.3 million (see Figure 1). In aggregate, 12 crops had a combined decline of 1.4 million acres while 4 crops had a combined increase of 1.0 million acres. 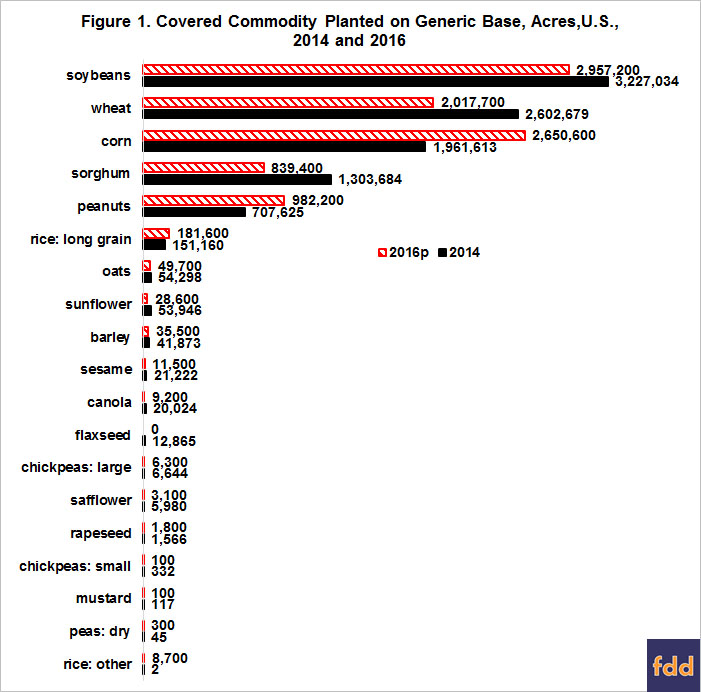 Economic theory suggests net return to production is likely to be a factor in acres planted to individual crops, including acres planted on generic base. Cost of production data compiled by the USDA, Economic Research Service reveals that U.S. net cash return is highest for rice, corn, and soybeans, followed by cotton (see Figure 2 and data note 2). The crops listed in Figure 2 are the only ones for which cost of production is compiled. They however account for 99% of the covered commodities planted on generic base. 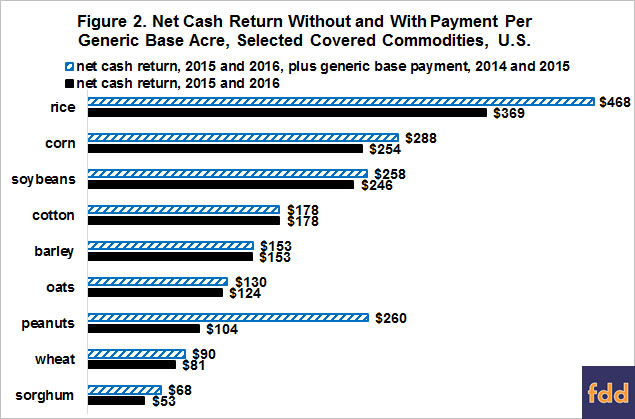 Impact of Generic Base Payments on Net Cash Return

Analysis of Generic Base Payments

Consistent with economic theory, both explanatory variables are significant (see Table 2). Statistical confidence in this finding is 98% for both variables. Both variables have a positive coefficient, which means that more generic base acres are planted to the crop in response to increases in net cash returns from the market for the crop and increases in commodity program payments for the crop (see data notes 4 and 5). The two variables explain 77.8% of the observed variation in the percent change in acres of a covered commodity planted on generic base.

Coppess, J., C. Zulauf, G. Schnitkey, and N. Paulson. "Beneath the Label: A Look at Generic Base Acres." farmdoc daily (7):68, Department of Agricultural and Consumer Economics, University of Illinois at Urbana-Champaign. April 13, 2017.