On July 28, 2017, the U.S. Court of Appeals for the D.C. Circuit handed issued its decision in the lawsuit over EPA’s interpretation of the Renewable Fuels Standard (RFS) and its waiver authority (Americans for Clean Energy v. EPA, 2017 U.S. App. LEXIS 13692 (July 28, 2017)). After years of litigation, the decision may add much-needed clarity to the RFS, albeit a result that falls short of the original goals for 36 billion-gallons by 2022.

The Renewable Fuels Standard (RFS) created by Congress and signed by President George W. Bush in 2005 and 2007, established increasing Federal mandates for blending renewable fuel into the transportation fuel market (see, farmdoc daily, August 9, 2017). Figure 1 illustrates the statutory RFS as designed by the 2007 legislation; mandates that increase to 36 billion gallons in 2022. Specifically, the statute created a schedule for total renewable fuel, advanced biofuel, cellulosic biofuel and an abbreviated schedule for biomass-based diesel. Conventional biofuels (e.g., corn-based ethanol) levels are implied using the difference between the total renewable fuels and the total advanced biofuels. Total advanced biofuels consist of cellulosic with the remainder implied as undifferentiated advanced biofuels, within which biomass-based diesel (BDD) is included. The BDD schedule ended in 2012 after which EPA has the discretion to set the levels each year after but not less than the 2012 level of 1 billion gallons. 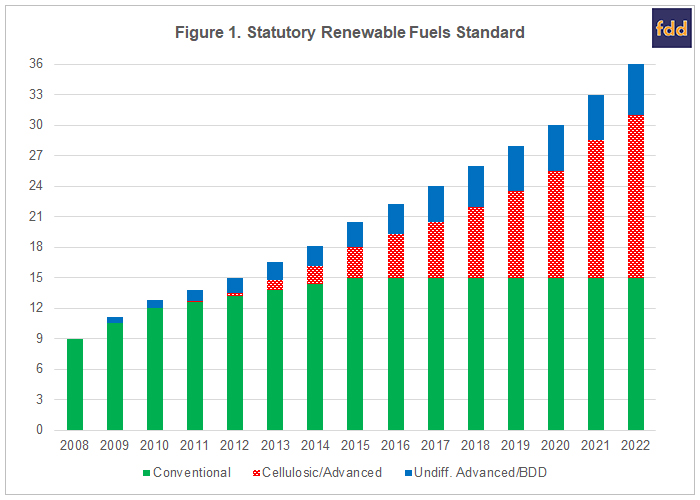 EPA was charged with administering the RFS and the statute granted the agency specific authority to waive the statutory requirements and lower the mandate in any year. EPA can only reduce the statutory mandate if it found severe harm to the economy or that there was an “inadequate domestic supply” of the renewable fuel. EPA was also provided broader discretion to write down the cellulosic biofuels portion of the RFS but limited authority in terms of the entire RFS. EPA’s 2015 rule covered the 2014, 2015 and 2016 calendar year requirements. It lowered the statutory mandates and EPA justified its decision based on its interpretation of the phrase “inadequate domestic supply” in the waiver authority. This was the central basis for the lawsuit. The appellate court overwhelmingly rejected EPA’s interpretation of its waiver authority.

The Court’s Decision on Waiver Authority

EPA argued that the waiver provision permitted it to consider factors such as the availability of renewable fuel to the ultimate consumer, as well as similar constraints on demand for renewable fuel. These constraints are generally known as the E10 blend wall. The DC Appeals Court thoroughly rejected EPA’s interpretation of the statutory waiver authority. The court opened with a discussion of Congressional intent in the statute. The RFS mandates applied only to refiners, blenders and importers (obligated parties) and did not place any mandates or compliance burdens on the ultimate consumer or fueling stations (Americans for Clean Energy, at *26). The RFS was intended to be a market-forcing policy that would create demand pressure and increase consumption. The court reminded EPA that the provision is only a waiver. It permits easing of the “requirements when complying with those requirements would be infeasible” and therefore “EPA’s reading of the provision makes little sense” (Id., at *35). In other words, the mandate to increase demand should control implementation; reductions are extraordinary, to be used only when necessary. EPA’s argument was the exact opposite of Congressional intent because it permitted lack of demand and consumer consumption to control the mandate.

The court also found the statutory waiver provision to be not at all ambiguous. The phrase “inadequate domestic supply” in the statute “authorizes EPA to consider supply-side factors affecting the volume of renewable fuel that is available to refiners, blenders, and importers to meet the statutory volume requirements” (Id., at *4 (emphasis in original)). The provision does not permit EPA to “consider the volume of renewable fuels that is available to the ultimate consumers or the demand-side constraints that affect the consumption of renewable fuel by consumers” (Id. (emphasis in original)). Use of the waiver depends only on the supply of renewable fuel to the obligated parties; because obligated parties use the statutorily-required volumes, they are the only ones who must have access to an adequate supply of it. Table 1 provides a summary of the court’s conclusions as to matters that are permissible for “inadequate domestic supply” waiver and those that are not. 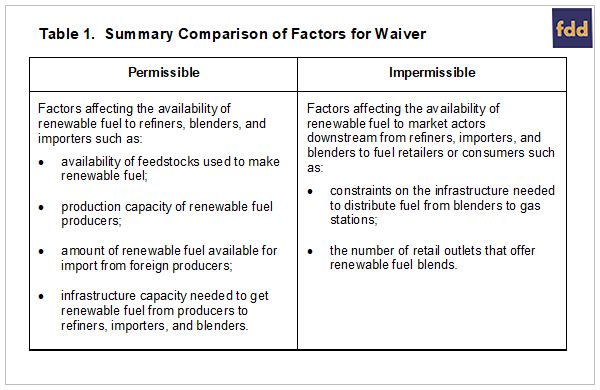 The court further supported its interpretation by looking to other waiver provisions in the statute. For example, Congress specifically permitted consideration of distribution constraints for the oxygenated fuel requirements. This demonstrated to the court, and should have to EPA, that when Congress intended to give EPA the authority to consider “downstream distribution capacity in addition to supply” it was very clear about doing so (Id., at *36-*37). Additionally, Congressional drafting history supported this interpretation. The court discussed how the House version of the 2005 bill included waiver language regarding distribution capacity but it was dropped in the Senate version and agreed-to by the House in conference. To the court, “Congress’s decision to drop the ‘distribution capacity’ language counsels against EPA’s reading in this case, which in effect would add that language back into the waiver” contrary to Congressional intent (Id., at *38). The court also clarified that EPA was not required to consider the carryover supply of RINs in its calculations of the supply of renewable fuels (Id., at *52).

Summarizing other Components of the Court’s Decision

While central to its decision, the interpretation of the general waiver authority was not the sole matter before the court. It also had to address challenges based on the lateness of EPA’s rulemaking. This was a matter that had been decided twice before, however; the court followed precedent in finding that EPA is authorized to issue late rules, “so long as EPA reasonably mitigates any burdens that its lateness imposes on obligated parties” (Id., at *59). Importantly, the mitigation requirement permits EPA to adjust the mandates to “the actual volumes of renewable fuel that were introduced and available for compliance during those years” as measured by RINS available (Id., at *60-*63). In effect, issuing a late rule permits EPA to set the mandate at actual supply levels which could be (and were) lower than the mandate. This creates the potential for additional concerns if EPA continues to issue late regulations. It is possible that EPA could continue to produce delayed or late rules and use that delay to write down the mandate to actual volumes. This could effectively provide an alternative method to reduce the mandate but should be an unlikely scenario. The court added to previous decisions, all of which have made it clear that any lateness has to be reasonable and cannot be “an excuse to shirk its statutory duties” (Id., at *63).

In a similar manner, the court concluded that EPA also had “statutory authority to issue the delayed biomass-based diesel volume requirements” and that EPA acted reasonably in setting the requirements (Id., at *69-*74). The issue was requirements above both the statutory minimum (1.0 billion gallons) and the 1.28 billion gallon level from 2013. The court concluded that the obligated parties had months to acquire the necessary RINs to comply with the 2016 requirements and that EPA had retroactively established the 2014 and 2015 requirements at actual volumes. These were reasonable approaches to mitigate hardship for obligated parties and were upheld by the court.

The National Biodiesel Board (NBB) and the obligated parties also challenged EPA’s decision on the advanced and cellulosic requirements; this included interpretation and use of the waiver authority for cellulosic biofuels. The court rejected the obligated parties’ argument, noting that EPA added biogas to the cellulosic category in 2014 and the addition increased the amount of cellulosic biofuel available to meet RFS mandates. The court approved of EPA’s projection methodology as both reasonable and reasonably explained (Id., at *84-*94).

Looking Ahead from the Decision

After years of litigation and regulatory uncertainty, the long and detailed decision by the appellate court adds much-needed clarity to the RFS; it could potentially bring about better certainty. Based on this ruling, in conjunction with previous RFS decisions, Figure 2 illustrates what can be presumed to be the effective RFS mandate going forward; the minimum levels of renewable fuel blended into the transportation fuel supply. 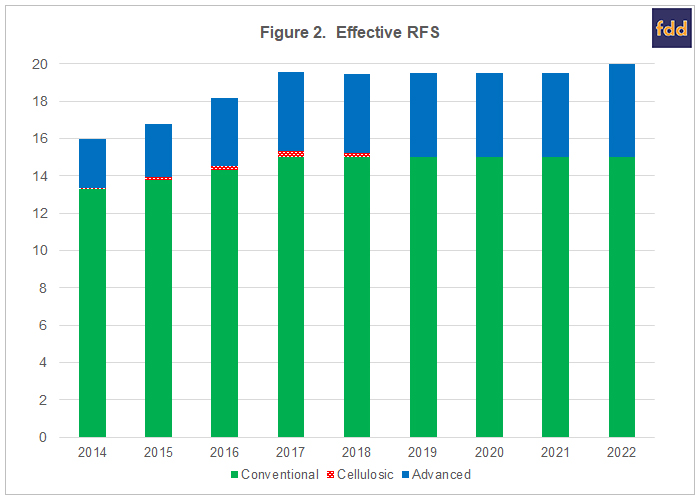 First, with its overwhelming rejection of EPA’s interpretation of the general waiver authority in the statute, the conventional fuel portion of the mandate appears to be locked in through 2022 at 15 billion gallons. Only substantial disruptions to production and supply capacity or something economically catastrophic would be expected to result in reductions. If there is uncertainty, it would be found in the combined authority to issue late rules and reduce mandates in those late regulations to actual volumes. Given the court’s statements, this backdoor method for waiving down the mandates seems unlikely going forward. It is, however, likely to reduce mandated levels of conventional ethanol for 2014, 2015 and 2016 by a combined total amount of a bit more than 2 billion gallons.

Second, the court has again concluded that EPA has broad discretion with respect to the cellulosic waiver and reducing that portion of the mandate; multiple decisions have now affirmed this discretion. Thus, the effective mandate in Figure 2 includes the minor volumes of cellulosic already set by EPA and generally accepted by the courts (2015-2018). To represent a true minimum, however, it zeroes out cellulosic after 2018 in recognition of the fact that EPA could do so if conditions justified it (e.g., lack of production capacity, distribution capacity or demand). Arguably, it is more likely that the cellulosic mandate remains at the low levels already established or that it could be increased slightly, but it is largely left to EPA given that the cellulosic market has failed substantially to meet Congressional optimism.

Finally, the undifferentiated portion of the total advanced biofuel mandate (e.g., total renewable, minus conventional, minus cellulosic) is included in the effective RFS in Figure 2. This portion of the mandate grows from 4 billion gallons in 2018 to 5 billion gallons in 2022 and is implied from the tables in the statute. It is also based on the limits to the cellulosic waiver provision; EPA is permitted to reduce the total renewable and total advanced by the amount of any cellulosic reduction or less but cannot reduce it further. This results in an implied minimum level of undifferentiated advanced biofuels which is expected to largely be met with biomass-based diesel.

The effect of years of dispute, confusion and litigation have resulted in an effective reduction in the original 36 billion-gallon by 2022 biofuel mandate from the 2007 statute to an actual, effective floor of 20 billion gallons by that year. That 20 billion gallon-floor will be made of 15 billion from conventional ethanol and 5 billion from advanced biofuels, largely biomass-based diesel. It is certainly feasible for EPA to increase the mandate if cellulosic biofuel production increases but there is little argument left that it can lower it beyond deficiencies in cellulosic production. Ultimately unable to meet the ambitious numbers set down in statute, the RFS has nevertheless persevered on the numbers that lie in between; billions of gallons of homegrown renewable fuels have been and will be added to the tanks of American automobiles.