Biomass-based diesel, which includes both biodiesel and renewable diesel, plays a critical role in compliance with RFS mandates. Since 2013, biomass-based diesel (BBD) has been the “marginal gallon” for complying not only with the advanced mandate but also the conventional (ethanol) mandate due to the constraints on ethanol consumption presented by the E10 blend wall. In the farmdoc daily article of July 19, 2017 we estimated the amount of BBD required to fill the BBD mandate and also fill the advanced and conventional gaps would be near three billion gallons in both 2017 and 2018. In the farmdoc daily article of July 26, 2017 we took advantage of the unique opportunity for identifying and estimating BBD supply curves due to the expiration of the biodiesel tax credit in 2016. The estimated supply curves have the interesting characteristic of being extremely price elastic. Most recently, in the farmdoc daily article of August 9, 2017 we examined a recent Court ruling invalidating the EPA’s interpretation of its waiver authority under the RFS and the range of remedies that the EPA could consider.

Here, we use the estimated BBD supply curves to examine the implications for biodiesel prices of alternative policy scenarios. The first set of scenarios is based on a range of remedies that the EPA could consider in response to the Court ruling that invalidated the EPA’s interpretation of “inadequate domestic supply” when establishing conventional ethanol mandates. These scenarios include: (1) a 3.0 billion gallon BBD requirement for “normal” RFS compliance and zero gallons of mandate backfill; and (2) a 3.0 billion gallon BBD “normal” requirement plus 500 million gallons of mandate backfill for 2016, for a total requirement of 3.5 billion gallons. In addition, we consider the price impact that would result from restricting BBD imports from Argentina and Indonesia. U.S. BBD producers filed an antidumping and countervailing duty petition with the U.S. Department of Commerce and the U.S. International Trade Commission in March 2017. The results of the analysis should help inform market participants and the policy making process.

We start the analysis with the BBD supply curves that were estimated in the farmdoc daily article of July 26, 2017 and presented in Figure 1. The import and domestic supply curves were estimated by regressing the annualized monthly imports and domestic production in 2016 on the average monthly price of BBD. The total supply curve, then, is a horizontal summation of the estimated import and domestic supply curves. The price of soybean oil, a major feedstock for production of BBD, averaged $0.32 per pound for the year and was in a very narrow range during the first three quarters, before increasing during the final quarter. The average monthly price ranged from about $0.29 to about $0.37 per pound. The estimated supply curves, then, reflect soybean oil prices in the range experienced in 2016 and currently prevail. The supply curves would be expected to shift with different levels of feed stock prices. 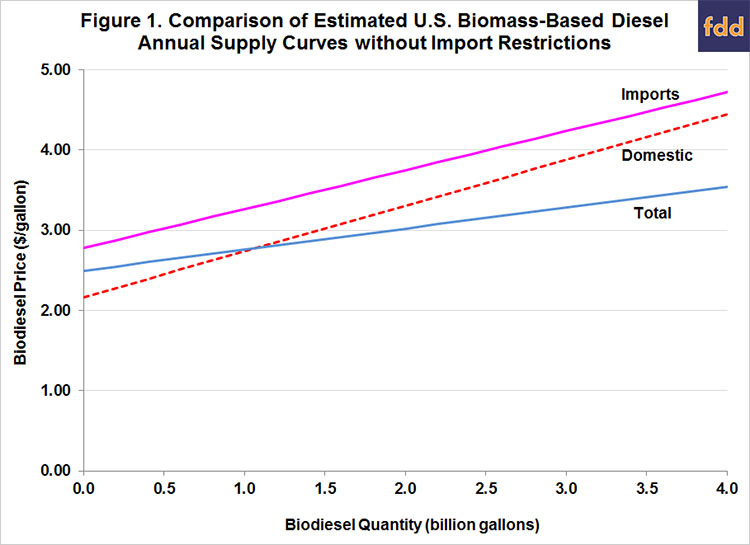 The most striking characteristic of the estimated supply curves is the “flatness” that reveals large price elasticity of both net imports, domestic production, and total supply. Specifically, the supply elasticities evaluated at the means of the data are about seven, three, and four for net imports, domestic production, and total supply, respectively. This implies that a one percent increase in price results in a seven, three, and four percent increase in quantity, respectively. This further means that a given increase in quantity will increase price only modestly. The large elasticities are not surprising in light of the overbuilt nature of BBD production capacity in the U.S. and other countries. In this situation, prices do not have to cover the variable and fixed costs of production for slack capacity to be brought online; but, instead only have to cover variable costs because the capacity is already in place. This excess capacity presents a constant threat of over-production once BDD prices exceed variable costs of production.

We next consider the magnitude of BBD imports from Argentina and Indonesia that would likely be eliminated as a result of an antidumping import duty. Figure 2 shows monthly BBD imports from all countries and combined imports from Argentina and Indonesia in 2016. Imports from those two countries totaled about 546 million gallons for the year, accounting for 48 percent of total imports. We assume that the imposition of import duties would be sufficient to eliminate BBD imports to the U.S., and therefore, shift the import supply curve and total supply curve in Figure 1 to the left. Specifically, we subtract 546 million gallons from the quantity supplied at each price level. Figure 3 presents the restricted import and total supply curves. The domestic supply curve is unaffected. 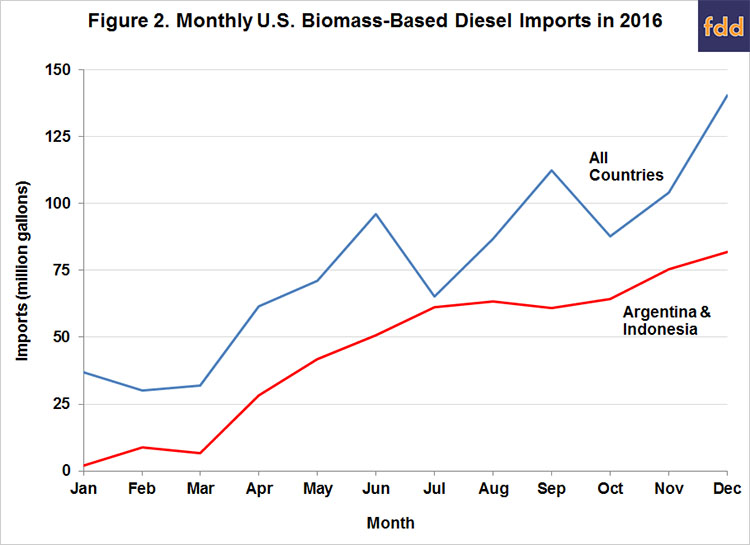 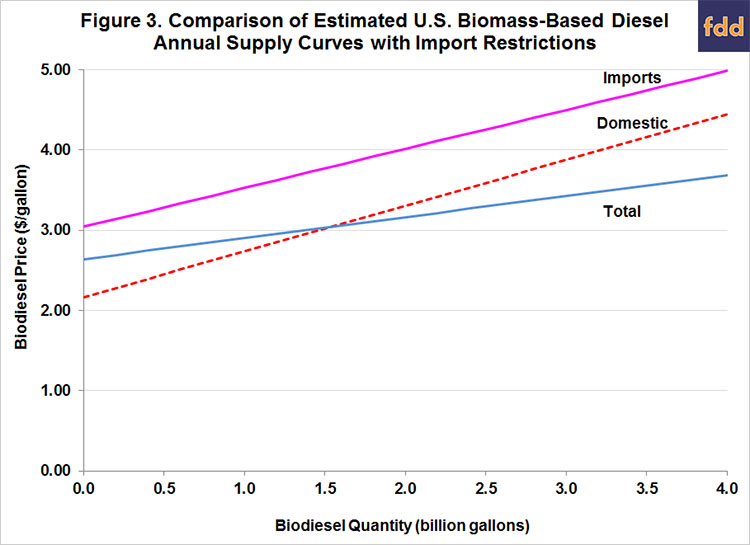 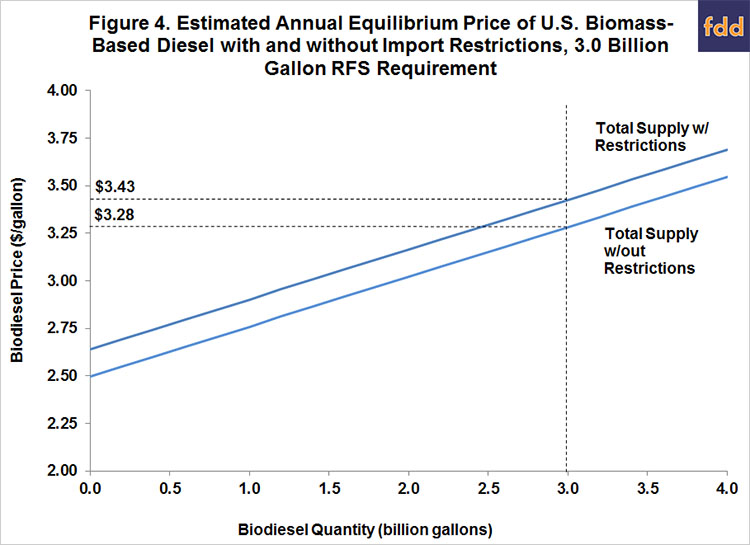 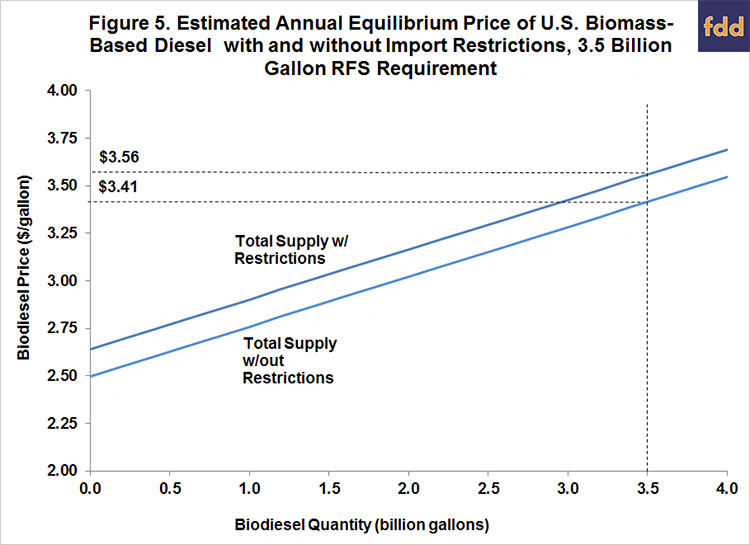 Our analysis suggests that the imposition of an antidumping duty that restricts biomass-based diesel (BBD) imports from Argentina and Indonesia would add about $0.15 per gallon to the average price of BBD in 2018. In addition, an EPA remedy to the court ruling invalidating the interpretation of “inadequate domestic supply” that increased BBD demand by 500 million gallons in 2018 would also add $0.15 to the equilibrium price of BBD. The price impact of each of these policy alternatives is relatively small at about four percent, with a combined impact of about 8.5 percent. While the estimated price impact is modest, it is not economically trivial when applied to 3.5 billion gallons of total BBD consumption.

It is important to recognize that our identification and estimation of the supply curves depends entirely on data only from 2016. In addition, results of our analysis would differ if supply curves are non-linear beyond the largest observed annualized values we used in estimating the curves. Our estimates of the price impacts of alternative BBD policies should be considered in light of these potential limitations. Upcoming farmdoc daily articles will examine the potential impact on D4 biodiesel and D6 ethanol RINs prices of restricting BBD imports and increasing RFS requirements. The RINs price implication of converting the blender tax credit to a producer tax credit will also be examined.

Irwin, S and D. Good. "Filling the Gaps in the Renewable Fuels Standard with Biodiesel." farmdoc dail (7):130, Department of Agricultural and Consumer Economics, University of Illinois at Urbana-Champaign, July 19, 2017.