Since the Hatch Act was enacted in 1887, public funding of agricultural research has been a U.S. priority and often is cited as a cornerstone for U.S. agricultural abundance. Public funding currently is centered in Title VII of the Agricultural Act of 2014. Researchers and some stakeholders contend Title VII is inadequately funded to meet today’s need to produce more using sustainable methods. Some farm groups are considering whether to move research up their priority ranking. This article assesses the issue of funding public agricultural research, ending with suggesting a new paradigm for funding it.

A common explanation is high private market returns to agricultural research, especially with the extension of intellectual property rights to biological innovations and increasing agricultural production and trade around the world. Indeed, U.S. private sector spending on agricultural research has increased, nearly doubling since 2003 (Clancy, Fuglie, and Heisey).

Other factors may be more important. U.S. consumers now spend under 2% of their income on the U.S. produced farm value of food; it was 12% in 1947 (see Figure 1). As a result, the long-standing mantra of public agricultural research, “growing 2 blades of grass where 1 grew before” no longer resonates, resulting in waning societal support. 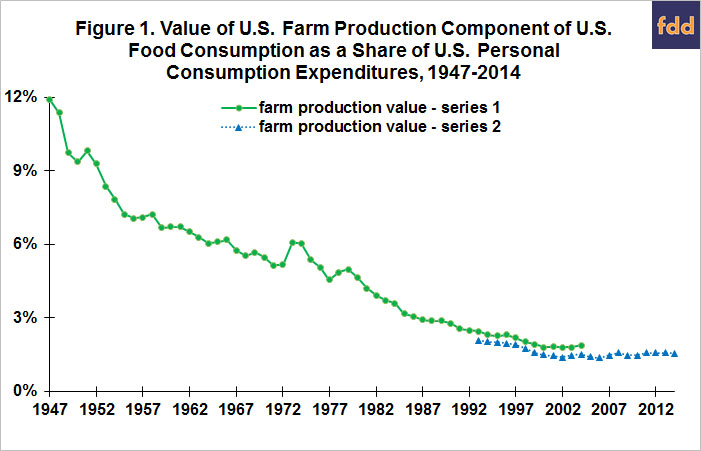 Farm bill stakeholders know public agricultural research has a high return (Tomson), but their behavior implies it is not high enough to make research a top priority. Commodity groups routinely elect assistance over public funds for research to improve yields and international competitiveness. Conservation and food aid groups routinely elect assistance over research to more effectively address their concerns, such as the role agro-climate and management play in the success of conservation practices and the role individual consumer decisions play in nutrition and health.

Despite notable dialogue, a large increase in U.S. public agricultural research funds is unlikely unless society’s enthusiasm revives or choices of farm bill stakeholders change. Their choices however are risk-averse and rational. They favor known, immediate assistance over uncertain, longer term benefits. This situation parallels the oft-discussed incentive of private market firms to favor short term profits over potential future benefits. A solution is to better align short and long term incentives. In the private market, consumers can buy products from a firm that pursues long-term benefits they value, thus enhancing the firm’s profits. Public agricultural research needs a similar connection.

Funding research as a percent of the spending on other farm bill titles could create this connection. Research funding could be further aligned with the dynamic, evolving nature of farm bill spending choices by designating that a specified share of funds generated by a title must be spent on researching issues associated with the title. This new paradigm would replace the current system of a separate research title with funds authorized by individual research program or specified research topic.

We acknowledge no objective metric exists to set the research funding shares. The policy process would set them. The end result could be the same outcome as now, but a new process with a new focus always opens the door for a new outcome (see end note 1).

Perhaps it is time to consider a new paradigm for farm bill research. A new paradigm is suggested for discussion: to better align short and long term incentives, designate a share of spending on other farm bill titles for research and a share of a given title’s funds to research issues of that title.

1. This example illustrates the potential for change. Using an overall funding factor of 0.5%, which does not seem unreasonable given the high returns to public agricultural research, and the 2014 farm bill; 10-year funding for agricultural research would have been $4.8 billion instead of $1.3 billion ($956.2 billion in projected 10 year farm bill spending minus $1.3 billion in Title VII spending, multiplied by 0.5%). Current spending is 0.14% of total projected farm bill spending.

Tomson, B. "Lesson #7: Farm Bill supporter challenged to focus on the long-game of science." Agri-Pulse. https://www.agri-pulse.com/