The new Margin Protection crop insurance policy can be purchased along with any COMBO product. Doing so will allow farmers to have “county” margin protection up to a 95% coverage level combined with farm-level coverage for revenues at lower coverage levels (see farmdoc daily, September 12, 2017). A specific illustration of combining Margin Protection with Revenue Protection for the years from 2000 to 2016 is provided in this article.

The specific example is for corn in Sangamon County, Illinois. Estimated Margin Protection payments were simulated in a farmdoc daily article released on September 19, 2017. Table 1 comes from the September 19th article and shows payments for Margin Protection with the harvest price option (MP-hpo). Payments are shown in the table’s final two columns. Three important points about these payments are: 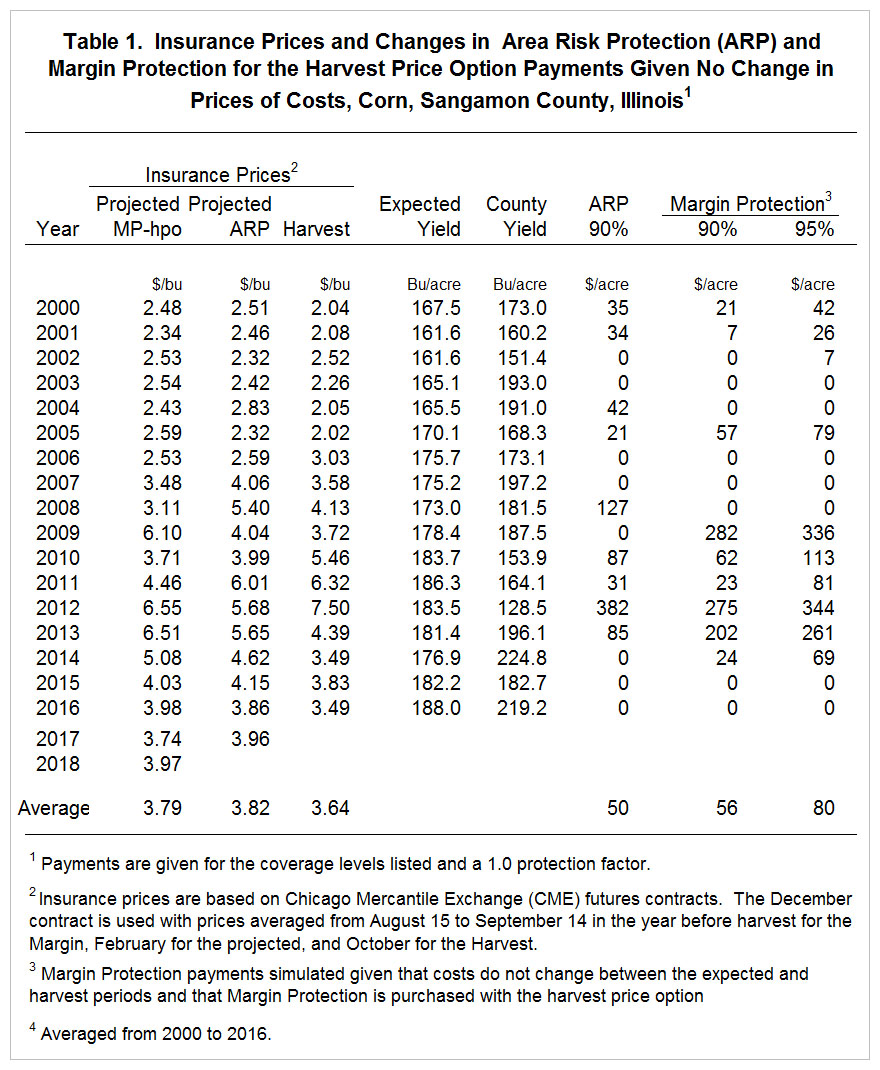 Selecting RP with MP will have two impacts on Margin Protection: 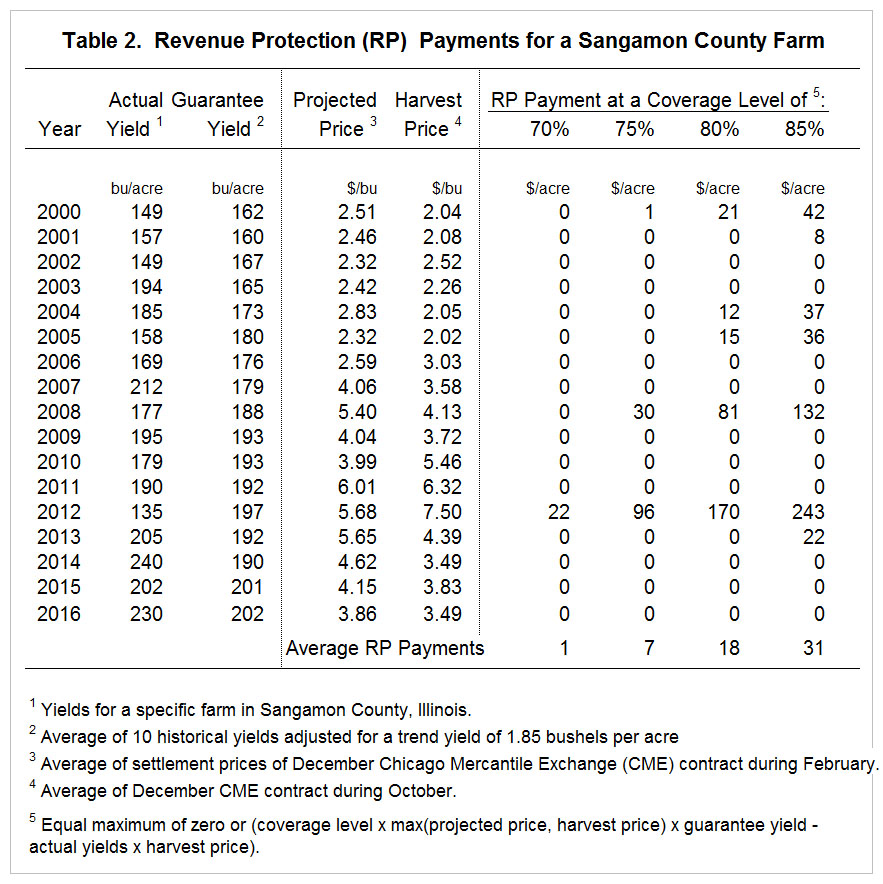 For the years from 2000 to 2016, the farm yield and county yield has a .89 correlation coefficient. This is close to the average of farms enrolled in Illinois Farm Business Farm Management (FBFM) in Sangamon County. Correlation coefficients for FBFM farms in Sangamon County range from .64 to .96. Farms with higher correlations will have a higher proportion of Margin Protection Payments offset by the RP policy.

Table 3 provides an example of combining payments from RP and Margin Protection. Table 3 first shows payments from the 95% MP-hpo policy given a 1.0 protection factor (see Table 1). These MP-hpo payments are the same as given in Table 1. Next, Table 3 shows RP payments at different coverage levels. These RP payments come from Table 2. The final four columns of Table 3 shows combined MP-hpo policy at 95% combined with RP at different coverage levels. These payments equal:

Note that the combined RP and MP-hpo will never be greater than the maximum of the MP-hpo payment or RP payment. Two cases are of specific interest: 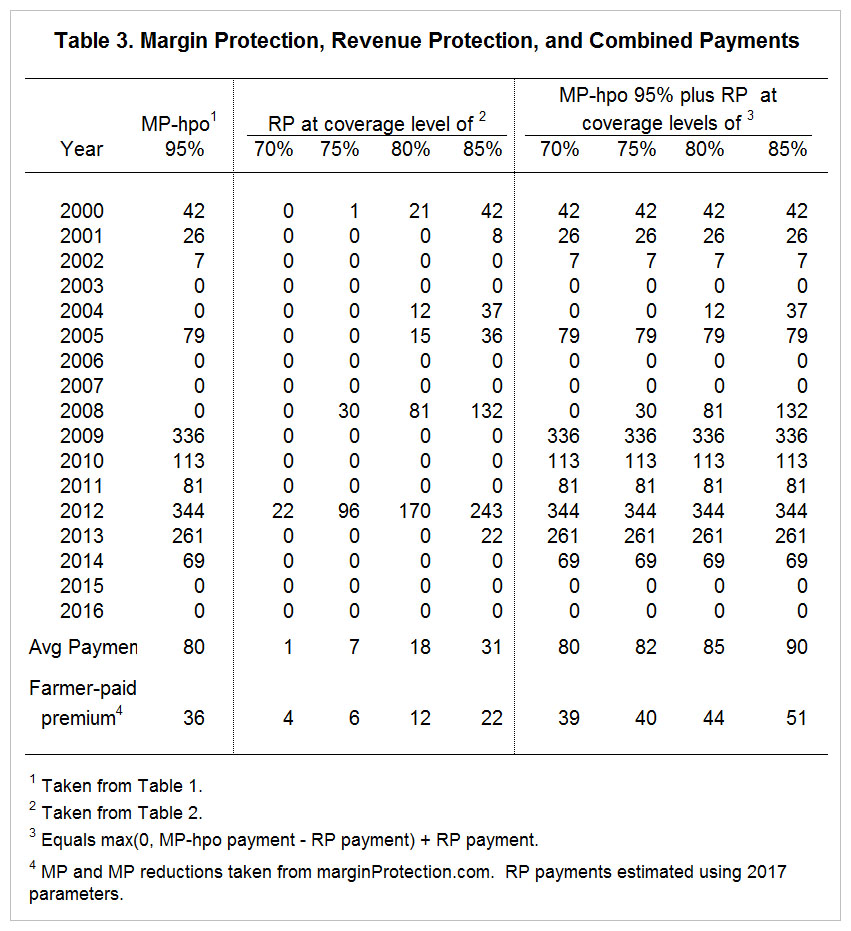 This farm has yields that are highly correlated with the county yields. Farms with lower correlations will have fewer of the MP-hpo payments offset by county payments. Also, note that the RP and MP-hpo reductions are not known for 2018. These will be known at the end of February when the projected price for February is known.

Farmers can use Margin Protection to obtain coverage at a high level based on county yields and changes in futures markets. Combining Margin Protection and Revenue Protection will allow farmers also to obtain farm-level protection. Doing so has relatively high farmer-paid premiums.