Farmers have until September 30th to determine whether to purchase Margin Protection, a new crop insurance product that provides payments when a harvest revenue-cost margin is below a guarantee set based on an expected revenue-cost margin (see farmdoc daily, September 8, 2017). Users of Revenue Protection (RP) could use Margin Protection (MP) to provide an extra band of protection on top of the RP policy. We will discuss this option in this article.

How would MP work with RP?

More detail on MP is provided in a September 8th farmdoc daily article. In brief, MP is not based on farm yields but based on county yields. In this manner, it is like the Area Revenue Protection (ARP) plan of insurance. Unlike ARP, MP is based on a margin that includes costs in its calculation.

When farmers purchase both MP and RP, payments resulting from RP will reduce any MP payments that occur. Suppose that RP makes a $60 per acre payment. If a stand-alone MP product would make a $100 payment, MP purchased in combination with RP would pay $40 ($100 MP payment – $60 RP payment). If MP pays $30 per acre and RP pays $60 per acre, MP purchased in combination with RP would make no payment ($60 RP payment exceeds MP payment of $30).

Since RP reduces MP payments, there is a reduction in the RP premium. Hence, jointly purchasing RP and MP will not add the total premium costs of a stand-alone RP product and a stand-alone MP product.

To reiterate, the MP protection is not offered on farm level yields. It is offered on county yields. There will be cases when farm losses occur and MP will not make a payment, and vice versa.

In our estimation, most farmers who currently use RP likely will only consider using MP to provide an additional band of margin protection. For example, plans could be made to purchase RP at an 85% coverage level and MP could be purchased at either a 90% or 95% coverage level. The alternative of totally switching from RP to MP likely will not be attractive because farm-level coverage will be given up in this process.

What are the Costs of a Joint Purchase of RP and MP?

Table 1 presents a set of premiums for MP and the associated reduction in premiums for RP at various coverage levels. A 1.0 protection factor is assumed for the example. This example is for Saline County, Illinois. Note that these are not the final premiums for the 2018 but based on the prices for the discovery period through September 9th. 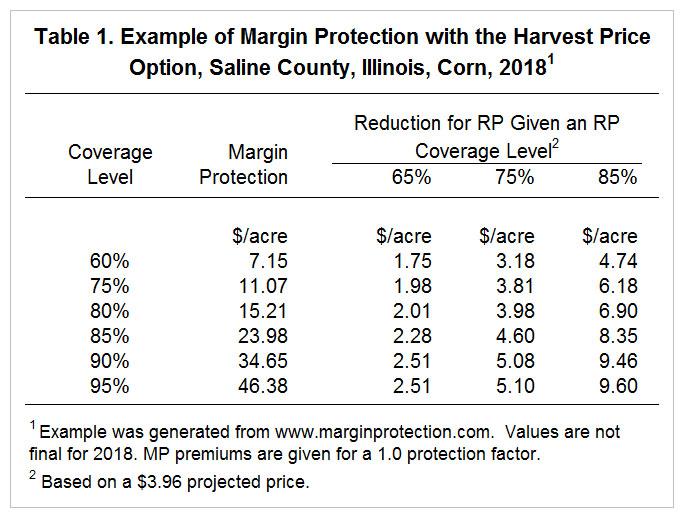 The tradeoff for RP users will be relatively high premiums for MP versus the risk protection offered by the addition of margin protection insurance. Over time, MP should pay out more in premiums than farmers pay into premiums due to government subsidies for the MP product. However, in a year where yields are near average and projected prices do not decrease, the amount of the additional MP payment will eliminate a good portion of the potential profit from farming the land that exists for that year. Thus, the number of times the MP contract will pay is a factor farmers should consider.

Is the Inclusion of Costs Justification Enough to Purchase MP?

MP is the first Federal product available for corn and soybean producers that includes costs in its calculations. Doing so allows MP to base its payments on margins rather than on revenues. The question then is does the costs calculations in MP offer farmers relevant risk protection? In other words, is the margin protection offered by MP attractive enough to cause RP users to add MP?

Table 2 illustrates how costs enter the calculation of MP-hpo, again for corn in Saline County, Illinois. Prices used in the example represent averages during the August 15th to September 14th discovery period for 2018 MP. This discovery period is not over. Hence, final values for 2018 could vary from those shown in Table 2. 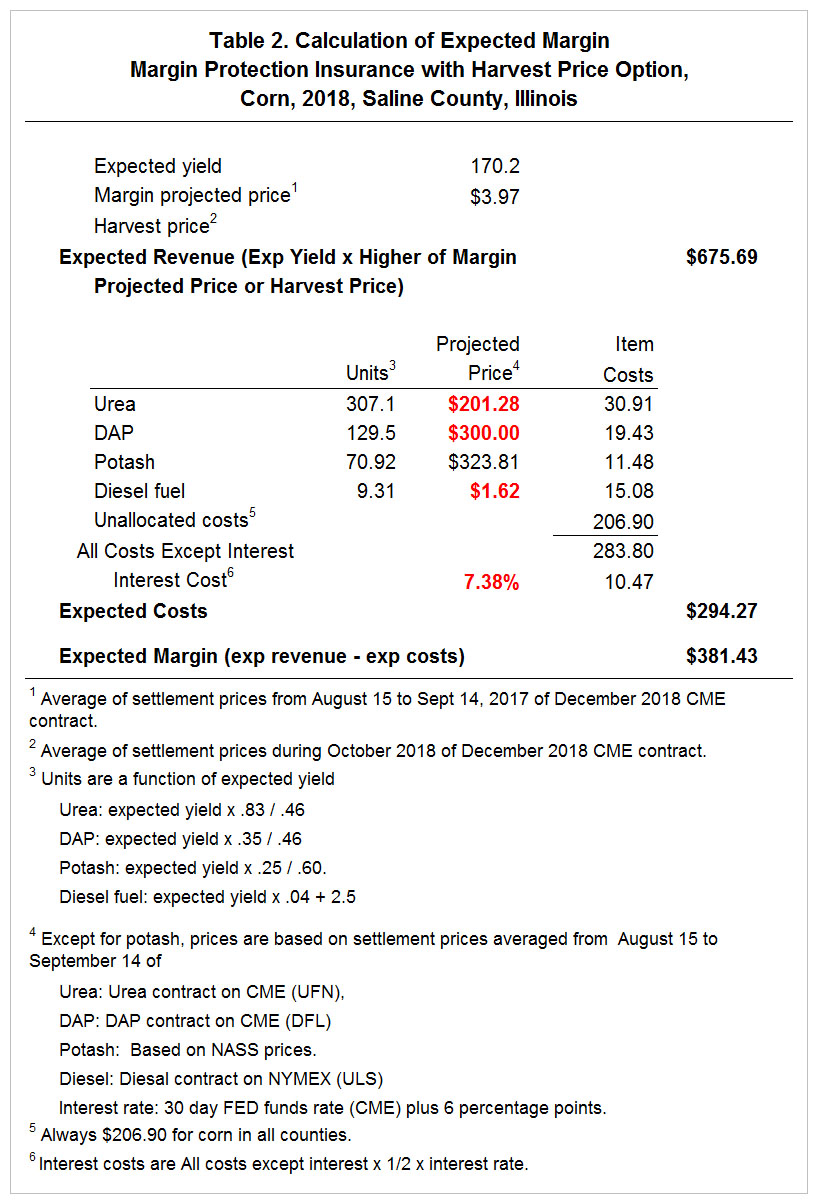 Harvest costs can differ from the expected costs. Units of input and unallocated costs will not differ between expected and harvest costs. Only four items can change:

When evaluating the benefits of including costs, four items should be kept in mind. The first is that in most years there will be limited movements in input prices. Whether or not MP makes a payment will largely be determined by changes in revenues and not in costs. Having made that statement, there will be years in which input prices do move, with the most likely to have the largest impacts on margins being urea and DAP prices.

The second item farmers will need to consider is how well costs in the MP product match their buying behaviors. For harvest costs, the price determination period is April. Many farmers apply nitrogen and DAP fertilizer in the fall. Furthermore, many farmers purchase inputs in the fall for application in the spring. Therefore, purchasing decisions may not match the discovery period set in MP. This factor could add risks in certain cases. For example, a farmer may have purchased nitrogen for the 2018 crop year already. If urea prices move down into spring, expected costs would go down while the farmer’s costs have not. Expected costs going down would increase the amount by which revenue needs to decrease before MP makes a payment

Third, costs included in the margin do not cover all potential cost increases. Costs of herbicides, insecticides, and fungicides are not included in the formula. Drying costs are not covered, except where fuel (propane or natural gas) follows diesel prices. Moreover, additional applications of fertilizer may be necessary in certain years. Also, replanting costs may be incurred (MP does not have replant or prevented planting payments, although an underlying RP product would have those provisions).

Fourth, the determination of the urea and DAP prices occur in thin markets. At the end of trading on Friday, September 8th, there were 15 open contracts on the May urea contract, and no trades occurred during the week (taken from estimated volume on CME reports. On September 8th, CME reports zero open interest for the May, DAP contract. In thin markets, a very few trades can influence settlement prices. As a result, prices tend to be more volatile in thin markets. This volatility can either work for or against MP making payments.

While margin protection has value, the implementation of any margin insurance will present difficulties. Farmers need to be aware that 1) most payments from MP will come from revenue changes, 2) quantities and prices specified in the margin protection contract may not match buying behavior, 3) not all costs increases are covered by MP, and 4) urea and DAP prices used by MP are traded in thin markets. For those reasons, the simple fact that MP incorporates costs does not necessarily warrant its purchase.

Adding MP to RP will have risk management benefits. Margin protection based on county yields and changes in futures prices will be added to farm-level revenue coverage offered. This comes at relatively high farmer-paid premium costs.