What is Margin Protection Insurance?

MP-hpo is similar to ARP. ARP is a county-level product, making payments when county revenue falls below a county guarantee. County yields are used in the calculation of county revenue. The innovation of MP-hpo is that it makes payments based on an “expected margin” rather than crop revenue. Expected margin equals:

The following points come from a comparison of MP-hpo and ARP:

Should Users of ARP Switch to MP-hpo?

Should Users of RP add MP-hpo?

An RP user could maintain the RP policy and add a purchase of MP-hpo. If a MP-hpo policy is purchased, a credit will be applied to the purchase of the RP policy. Even given this credit, the purchase of the MP-hpo can be costly. Take a case of corn grown in Sangamon County, Illinois. Purchasing MP-hpo at the 95% coverage level and having an 85% RP would add from $20 to $32 in farmer-paid premium per acre, depending on the protection factor selected given that an RP 85% product is used. Adding a 90% MP-hpo product adds $10 to $20 in farmer-paid premium costs depending on the protection factor In Sangamon County, Illinois. Other counties will be higher. Those values are averages and will depend on the year. The projected price of the underlying RP policy will influence the credit.

Over time, expected payments from MP-hpo should be above what the farmer pays in premiums. If MP-hpo is rated accurately, roughly $1.60 in payments should be received for each $1 of premium paid into the product. Of course, that will vary from year-to-year. In many years, MP-hpo will not generate payments.

An example of MP-hpo will be given for corn in Sangamon County, Illinois. The example is for 2018. At the time of the writing of this article, the price discovery period (August 15th to September 14th) is not over. Values used in this example were pulled from the Margin Protection site on September 6th. As a result, values are not final for 2018. 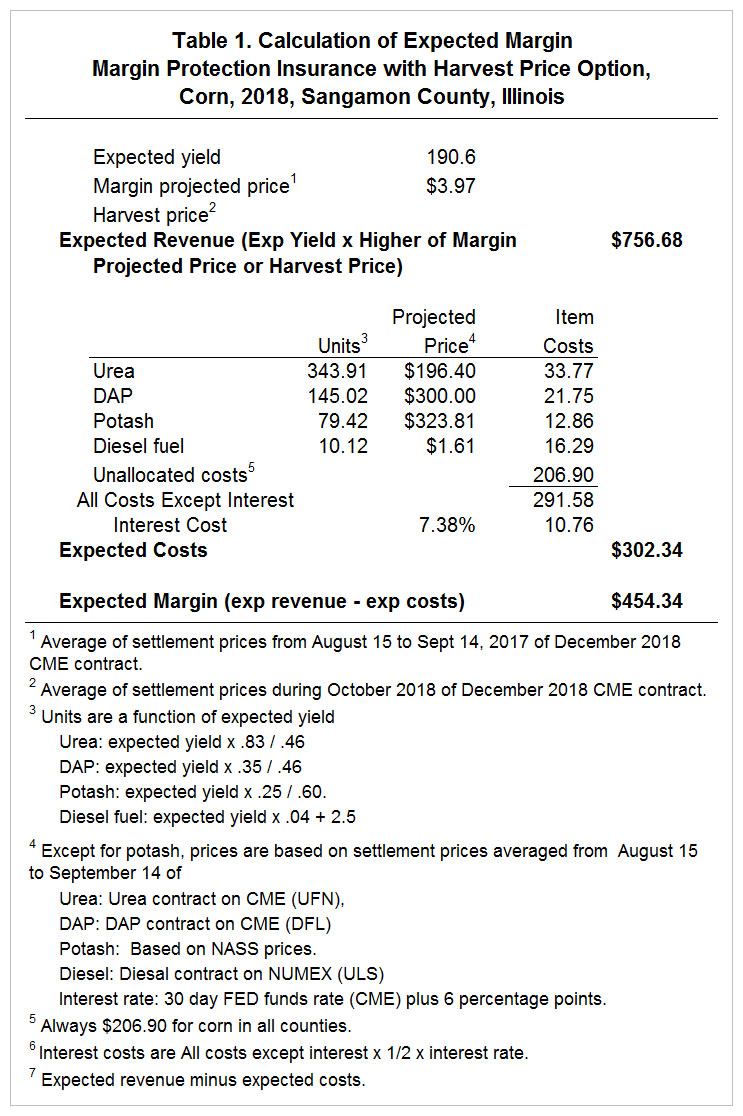 Trigger Margins: The expected margin enters into the calculation of trigger margins. A trigger margin is the level of margin insurance offered by the product. Payments will occur when the harvest margin is below the trigger margin. Trigger margins will depend on the coverage level chosen, which can range from 70% to 95% in 5% increments. 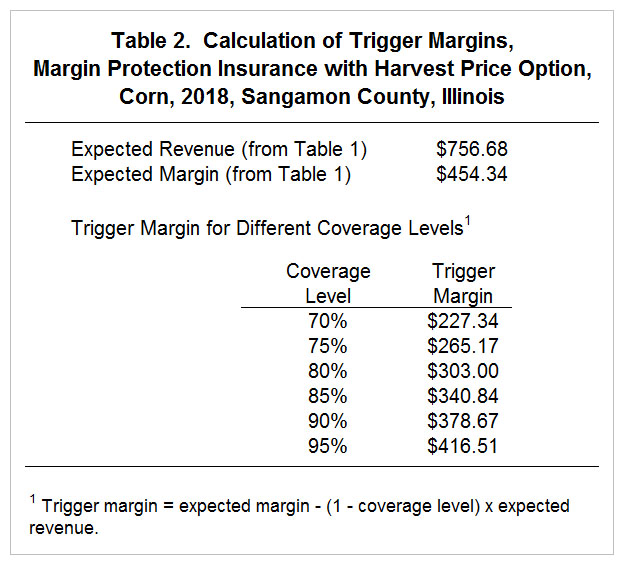 Given that expected costs do not change and margin projected price equals the projected price, both ARP and MP-hpo at the same coverage level will begin paying at the same harvest revenue. At a 90% coverage level, harvest revenue would have to decline by $76.69 per acre, given that harvest costs do not differ from expected costs in the MP-hpo calculation. 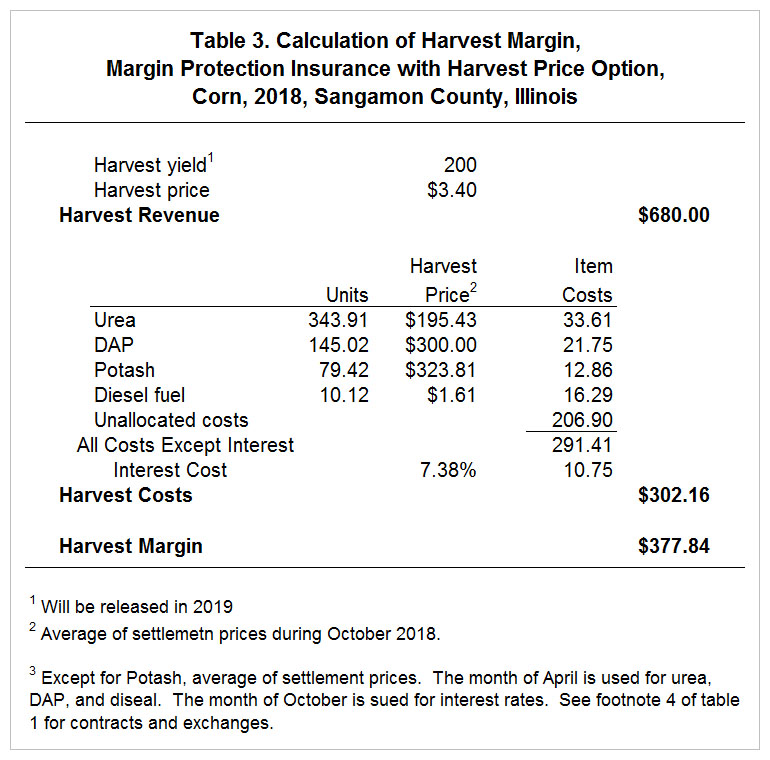 Harvest costs are also calculated. Quantiles used for urea, DAP, potash, and diesel fuel are the same as when calculating the expected margin. Unallocated costs will be the same. Potash price will be the same. The only items that potentially vary are the interest rate and prices for urea, DAP, and diesel fuel. Urea, DAP, and diesel fuel price will be based on settlement prices on the appropriate contracts during the period from April 1 to April 30. The interest rate is based on the average CME Fed funds contract from October 1 to October 30. To this rate, 6% will be added.

In the example in Table 3, the same prices are used as in calculating harvest costs as were used in calculating expected costs. Of harvest costs, only $82.40 are in items that can vary (urea, DAP, Potash, Diesel fuel, and interest). Hence, only 27% of the harvest costs can vary from the expected costs. In most years, variability caused by changes in these input prices will have modest impacts on harvest margin when compared to changes in the harvest yield and harvest price. Payments from MP-hpo mainly will be determined by changes in harvest prices and harvest yields. 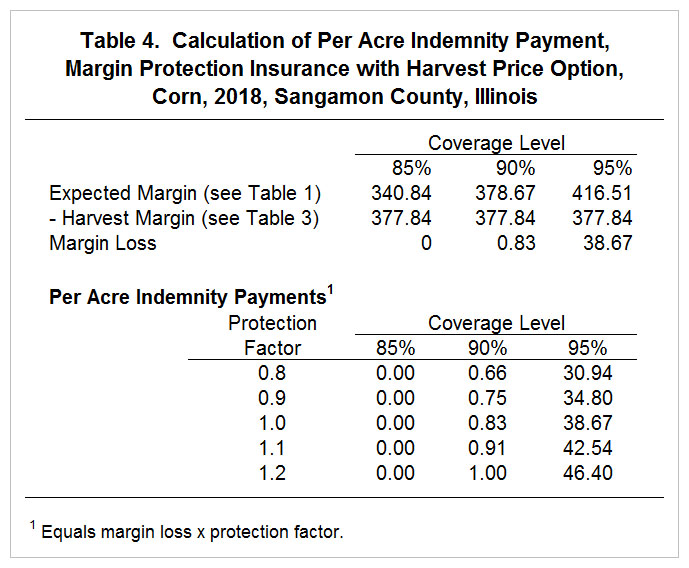 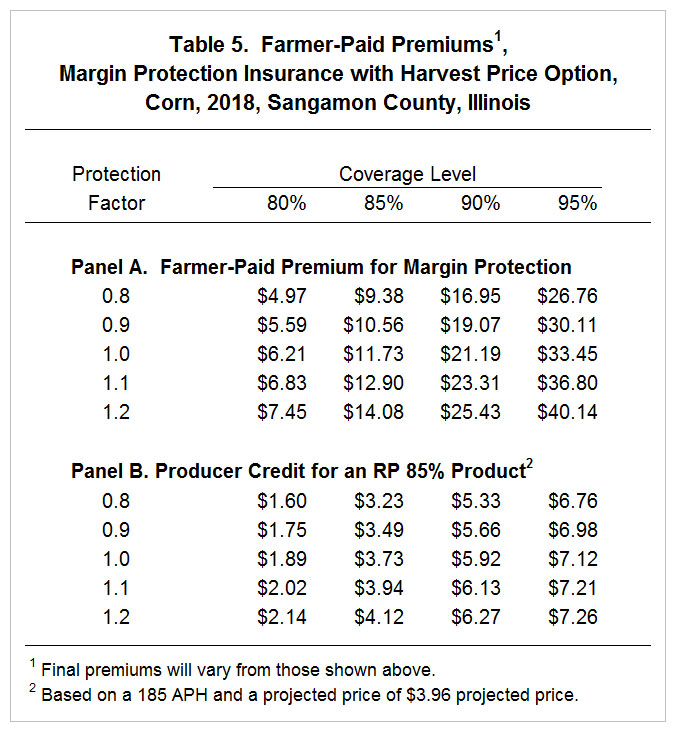 Purchasing RP along with MP-hpo

Farmers can purchase RP with the MP-hpo product (YP and RP with the harvest price exclusion could be purchased as well). In this case, RP insurance payments will reduce MP-hpo payments. As a result, a credit will be given to reduce the RP product.

As an example, take the Sangamon County case. MP-hpo will be purchased at a 95% coverage level and a 1.0 protection factor. MP-hpo will cost $33.45 per acre (see Table 5). The credit for this policy is estimated at $7.12. This credit is based on the farm’s previous yields and an estimated of the projected price. A $3.96 projected price was used in estimates. For enterprise units, an 85% RP policy would have a premium around $23 per acre. Given a purchase of the RP 85% policy, the farmer could add a 95% MP-hpo policy for $26.39 per acre ($33.45 MP-hpo premium – $7.96 credit). This would offer a zone of protection from 95% down to 85% coverage of the RP policy. This zone will be area based and not based on farm results. The zone also is a margin and not revenue.

MP-hpo will have benefits to certain users. Purchases of ARP may find a switch to MP-hpo beneficial. Also, RP purchasers may find adding MP-hpo of benefit. More on these decisions will be discussed in a September 12th farmdoc daily article.